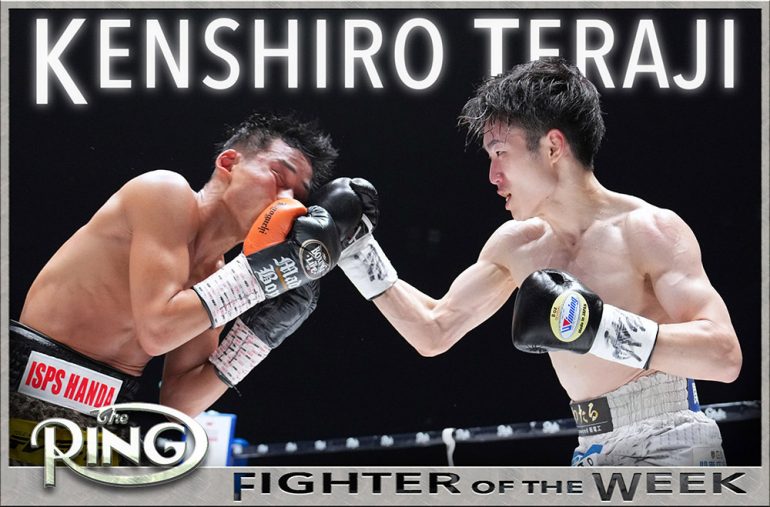 And finally, The Ring’s No. 1-rated light heavyweight Dmitry Bivol defended his WBA title with a 12-round master class against The Ring’s No. 3 contender, previously unbeaten (44-0) Gilberto Ramirez, in the Nov. 5 headliner in Abu Dhabi. 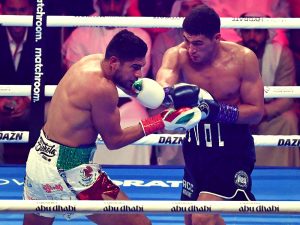 You can read about Cameron-McCaskill in the latest Women’s Rankings Update compiled by Diego Morilla. But Bivol’s and Teraji’s performances were considered pound-for-pound worthy by the men’s Rankings Panel. Bivol earned a top-10 rating (No. 7) after outpointing then-No. 1-rated Canelo Alvarez in May. Teraji had been knocking on the door prior to his surprise upset loss to Masamichi Yabuki last September, a stoppage setback that he avenged with a third-round KO in March.

“Dmitry Bivol dominated Gilberto Ramirez, he should move up one place and I have no problem if he also goes above (No. 5-rated) Canelo,” said Anson Wainwright. “Kenshiro Teraji deserves a mention to crack our pound-for-pound top 10. I’d love to see him enter the top 10 but we currently have a log-jam. Other fighters like Devin Haney, Shakur Stevenson, Roman Gonzalez, Juan Francisco Estrada and Kazuto Ioka also have worthy claims.”

Adam Abramowitz cast a vote to advance Bivol into Alvarez’s No. 5 spot, but fellow panelists Morilla and Martin Mulcahey believed a one-spot jump was enough for now.

“I thought highly enough of Zurdo to pick him to edge Bivol (ha ha), so yes I would second a move up one spot as he is on a roll,” said Mulcahey. “Above Canelo? I really would like that (especially since I think Canelo benefited from PEDs in his system one way or another) given Bivol’s head-to-head win, but Canelo’s overall resume is just too strong for now. Any performance drop by Canelo, or a Bivol win over (Artur) Beterbiev and the decision to elevate Bivol is easy. I really like Kenshiro Teraji as well, but can’t justify him given that one setback to a hot-n-cold foe (Masamichi Yabuki) where other equally talented boxers have yet to lose and are not P4P.” 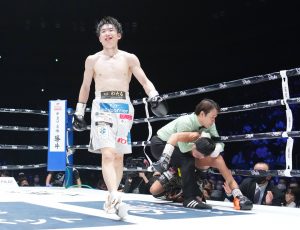 Kenshiro Teraji scored the biggest win of his accomplished career by stopping Hiroto Kyoguchi for the Ring/WBC/WBA 108-pound championship. Photo by Naoki Fukuda

Teraji (20-1, 12 KOs), a two-time WBC titleholder who has defended that belt nine times dating back to 2017, didn’t crack the Ring’s mythical rankings but he was selected as the Fighter of the Week by the Editorial Board. The 30-year-old native of Kyoto overcame a slight-odds favorite in beating countryman Kyoguchi, a fearsome two-division champ, and he did so in dominating and thrilling fashion. Teraji was considered the better boxer going in, and he proved to be, but after three rounds of jousting, “The Amazing Boy” took it to Kyoguchi, who had made four defenses of The Ring/WBA championship (in Japan, the U.S. and Mexico).

The wild Round 5, which saw Teraji drop and hurt Kyoguchi only to be seriously stunned himself 30 seconds before the bell, is a candidate for Round of the Year.

RING RATINGS UPDATE (as of November 5):

Pound-for-pound — Dmitry Bivol advances to No. 6.

“I think Teraji is worthy of a spot, but so are all the other guys that Anson mentioned. Tough one,” noted Tom Gray.

Cruiserweight – Alexsei Papin remains at No. 6 after stopping unbeaten but unrated Damir Beljo in two rounds. Mateusz Masternak advances to No. 7 after an impressive unanimous decision over Australian up-and-comer Jason Whateley.

Light heavyweight – Bivol remains No. 1. Ramirez drops to No. 4.

“Bivol boxed expertly and pulled away in the later stages against Ramirez,” Wainwright said. “He maintains his No. 1 position and Ramirez drops to No. 4. I can’t see Ramirez dropping lower as the guys behind him aren’t pulling up any trees. There is a huge drop off after the top guys in terms of talent.”

Added Mulcahey: “I’m with Anson here, Ramirez to drop to No. 4 while Bivol holds the No. 1 position with (the Artur) Beterbiev showdown crowning the next Ring champ.”

Super middleweight – David Morrell advances to No. 4 after one-sided (and unnecessarily extended) beating of unbeaten-but-unrated Aidos Yerbussynuly, who was brutally stopped in the 12th round (as is reportedly still in a medically induced coma at the time of this writing).

“I have been hyping Morrell from the beginning,” said Mulcahey. “I’d have him move to No. 3 but I’m not sure how the severe Yerbossynuly injury will affect (Morrell) mentally, otherwise he has every tool in his arsenal.”

“No problem keeping Loma at No. 1… (but) I think we should give some consideration to bringing Jamaine Ortiz in at No. 10 as well,” said Mulcahey. “He did beat (Jamel) Herring and took everything from Loma (who barely) edged him in 12. Plus, we kinda struggled to give (Gustavo) Lemos (as much I like his upside) the No. 10 spot. I would even drop Jo Jo Diaz out to bring Ortiz in.” 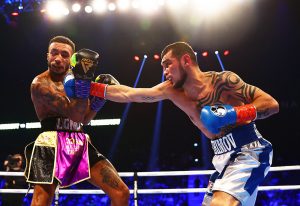 Rakhimov (right) started slow but eventually overwhelmed Barrett and forced his corner to throw in the towel. (Photo by Francois Nel/Getty Images)

“Rakhimov struggled early and had to get off the canvas, overcome the scorecard deficit and stop Zelfa Barrett in nine rounds to win the vacant IBF title,” noted Wainwright. “It’s a tough one. We could leave Rakhimov at No. 3 because he had some struggles or move him up one place. I’d go for the later as he found a way to get the win.”

Added Abramowitz: “I wouldn’t move Rakhimov up. Keep him where he is.”

Aded Mulcahey: “Rakhimov will probably struggle in every fight from Rounds 1 through 4, then come alive and steamroll any opponent who can’t stay out of his way. I’d keep Hector Garcia above him for now. It’s a tough call since Rakhimov has a better overall resume IMO but nothing Rakhimov has done recently equals Garcia’s dominance of Chris Colbert. It’s probably recency bias, I go back and forth, so I am good with the majority vote.”

Added Gray: “I thought Rakhimov fought a very good fight, even if that title should never have been on the line. I’d keep him at No. 3.” 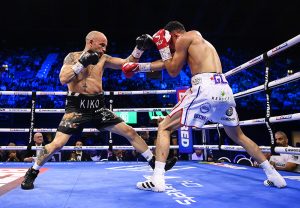 Martinez takes it to Gill. Photo By Stephen McCarthy/Sportsfile via Getty Images

“Kiko Martinez stopped Jordan Gill in four rounds to claim the European title,” said Wainwright. “Vintage Kiko, bass ass little assassin who’ll fight anyone. I really rate Ramirez, who might be the best 126 pounder in the world. He’ll likely get his chance to prove that next year.

“Kiko looked great but I can’t see him over Gary Russell given the nature of how he lost to Russell. I know Russell is very inactive and recovering from an injury. It doesn’t look right that Kiko drops but I can’t see a way around it as Ramirez has to move up on his win.”

Gray’s retort: “I might be in the minority (I’m used to that), but I think a three-spot jump for Ramirez is enormous, given who he beat. Nova is a prospect whose best wins have come against other prospects. I can’t take him over Leigh Wood, who has scored back-to-back knockouts over Xu Can and Michael Conlan, both as underdog. I agree with Anson in that the uber-talented Ramirez is the future at featherweight, but there’s no need to rush this. Let’s see the results first.

“The difficulty we have with Russell is self-inflicted. I don’t know why he ever came back on in the first place – the guy hasn’t won a fight in two-and-a-half years. And it’s been even longer since he beat someone significant. I get that he was injured – and he was clever and brave against Magsayo – but one hard training camp a year for SEVEN YEARS likely put him at a higher risk of injury than his more active counterparts.”

“Junto Nakatani made his debut at 115 with a workmanlike performance to beat Francisco Rodriguez Jr. A really good learning curve,” said Wainwright.

“Taku Kuwahara scored an impressive 12-round unanimous decision over Giemel Magramo,” noted Wainwright. “This win puts Kuwahara in the 11-15 range.”

Junior flyweight – Teraji is the new Ring champion. Kyoguchi drops to No. 2. Jonathan Gonzalez advances to No. 1 following a unanimous decision over Shokichi Iwata, who remains at No. 10.

“Gonzalez impressively retained his WBO title against Iwata,” noted Wainwright. “Gonzalez to No. 1 and Iwata to stay at No. 10 after a solid effort.

Strawweight – Wilfredo Mendez remains at No. 5 following a 10-round decision over unrated Moises Caro.