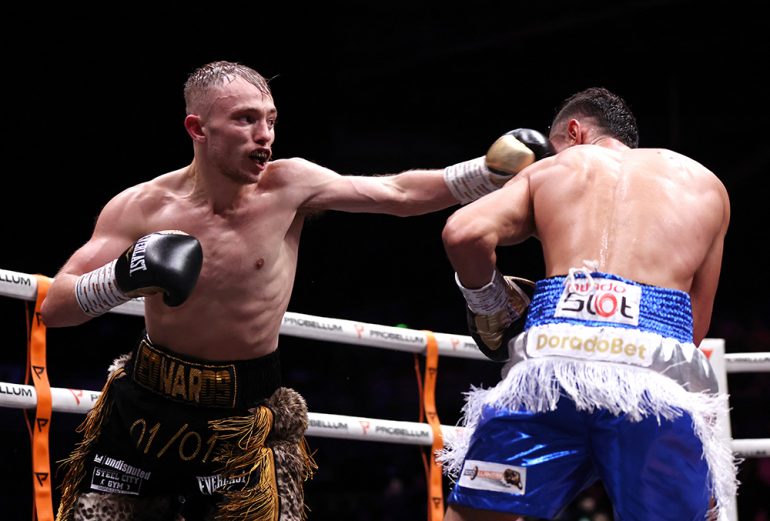 Things could have hardly gone any better for Sunny Edwards in his homecoming title defense against Felix Alvarado.

Facing a tough contender with plenty of experience, the unbeaten Edwards made the most out of his home advantage at the Sheffield Arena and dished out a boxing lesson against a willing Nicaraguan challenger who never stopped trying, and earned a unanimous decision win with scorecards of 115-113 (twice) and 116-112.

Edwards came out boxing beautifully off the back foot, luring Alvarado into his traps and setting up his combinations very effectively. Edwards kept Alvarado in pursuit in the first three rounds, circling him and exhibiting amazing footwork while landing solid combinations from all angles. 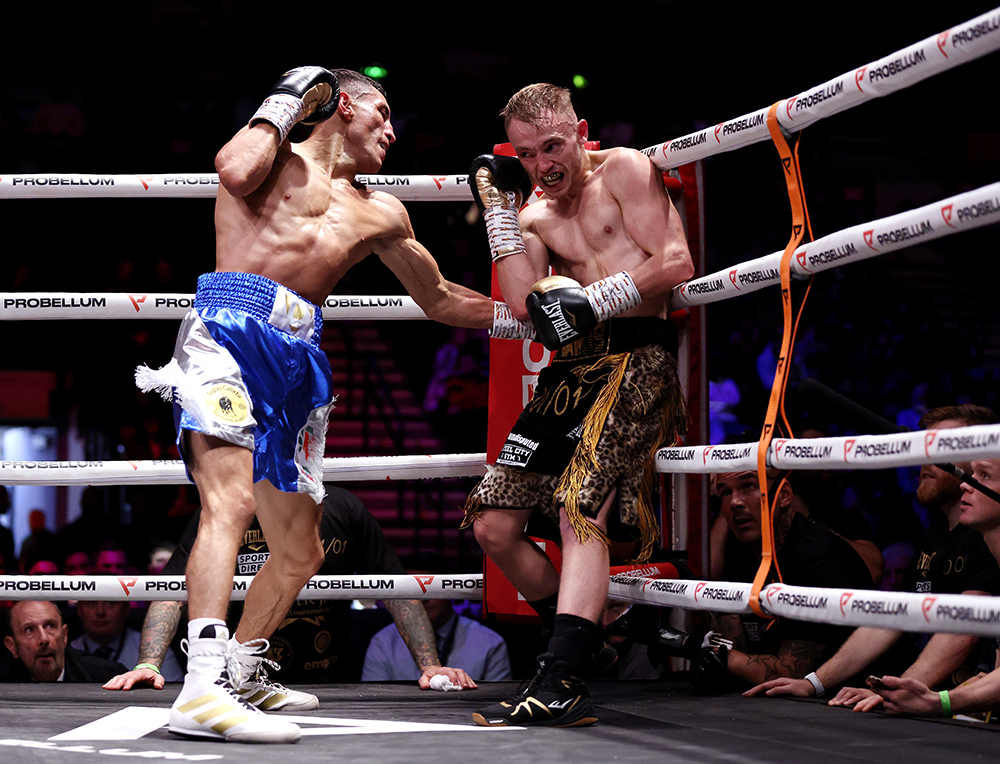 Edwards stepped up his game even further in the sixth round, landing some clear shots that stunned Alvarado briefly (including a highlight-reel left hook earlier on), but continuing to accumulate damage instead of going all out for a stoppage that would likely not come against the granite-chinned Nicaraguan.

Feeling the urgency to do something dramatic, Alvarado went all out in the seventh, committing to longer shots from a distance and chasing Edwards across the ring while connecting with some serious blows. Edwards rode out the storm and came back with a few terrific uppercuts and hooks, barely keeping Alvarado at bay.

Alvarado had another solid moment in the eighth round, when he appeared to score a knockdown that was ruled a slip, but Edwards did look somewhat hurt in the process. Encouraged, Alvarado came out guns blazing in the ninth, trying to turn the fight into a brawl as both men started to show the wear and tear of a highly physical bout.

Edwards chose to stay on the ropes in the 10th and tried to fight Alvarado off from that position. He achieved that in the first part of the round but took some serious punishment to the body later in the round.

In the last two rounds, Edwards returned to the original recipe of moving in circles around Alvarado and counterpunching with pinpoint precision to cement his well-earned victory. 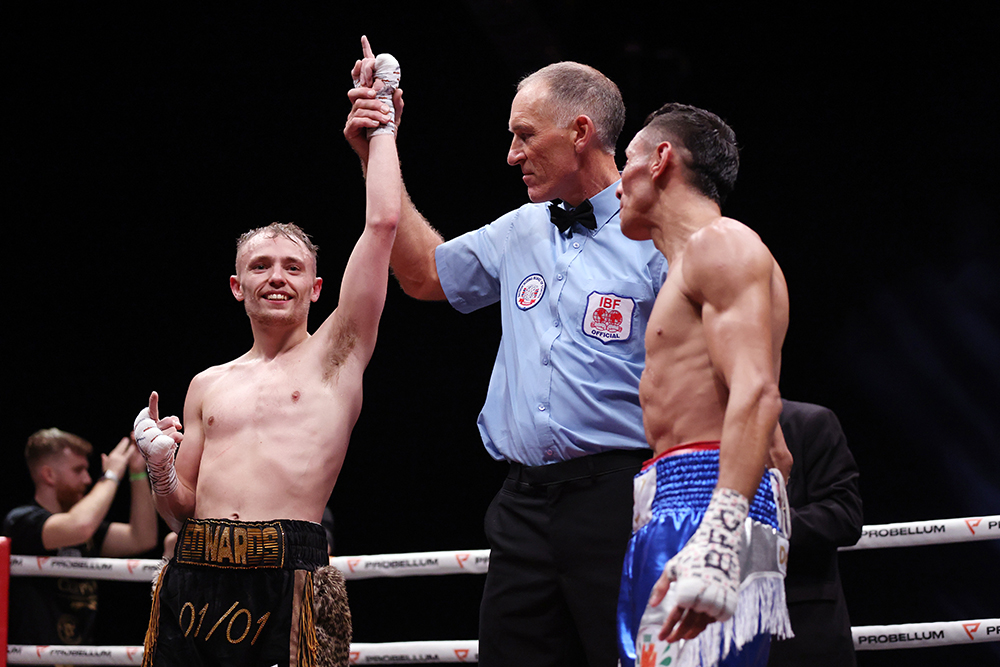 “It’s nothing less than I expected,” said an exultant Edwards (now 19-0, 4 knockouts) after the fight. “This was my homecoming. It took three defenses to get it. He was a very hard puncher, but I was not to be denied.”

After that, he called out fellow titlists Julio Cesar Martinez and Jesse “Bam” Rodriguez.

With the loss, Alvarado dips to a still very respectable 38-3 with 33 KOs.

In the co-main event, a bad-blood feud between unbeaten junior featherweight fringe contenders Jack Bateson and Shabaz Masoud ended with a demolishing 12th-round stoppage win for the latter after a competitive fight earlier on became a progressive beating later in the night.

Bateson stormed out of the gates in the first two rounds but started showing some serious deficiencies in his defense one or two rounds later, catching almost everything that Masoud threw at him but landing his own shots at a good rate nonetheless.

Masoud took a more patient approach, waiting for Bateson’s mistakes and counterpunching effectively throughout the bout, picking his punches nicely and digging in some terrific shots to the body.

Masoud also took advantage of Bateson’s faulty switch-hitting ambitions. While Masoud never abandoned his solid balance from his southpaw stance, Bateson switched back and forth from his orthodox stance trying to position himself for better angles, with mixed results.

Masoud’s control was even more evident down the stretch, with Bateson showing more signs of damage as the night progressed and Masoud scoring almost at will. A short right hook sent Bateson to the canvas early in the 12th, and after a ruled slip sent him down again, Masoud went all out looking for the stoppage and he got it, with Bateson pinned in a corner receiving tons of punishment as referee Howard Foster stepped in to halt the beating. 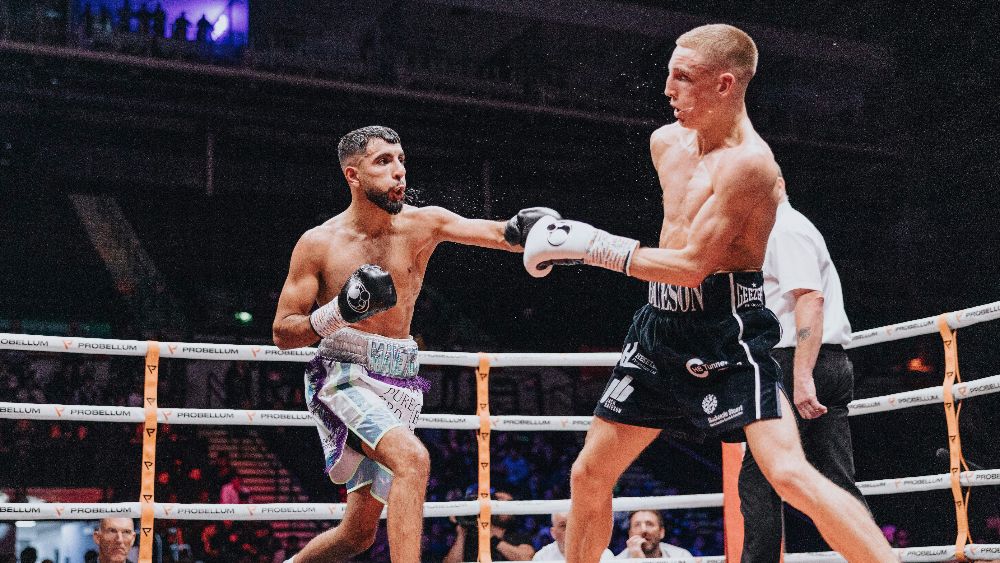 Previously, Brazilian Olympic gold medalist Hebert Conceição improved to 3-0 at the expense of Gideon Onyenani (now 4-2) in a middleweight contest. Referee’s Howard Foster’s single scorecard of 60-54 paints the whole picture for this confidence-building win for the towering Brazilian, who did expose more than a few lapses in his defense that may cost him dearly down the road if left untreated.

In a junior bantamweight bout, Thomas Essomba came up short in his spirited effort to defeat Marcel Braithwaite in a British title eliminator. After missing weight and having to weigh in again the day before, Braithwaite looked stronger and more active down the stretch after overcoming a sustained attack by Essomba earlier on. Braithwaite moved on to 14-3 (no stoppage wins in his record) while Essomba dipped to 11-8-1 (4 KOs) after receiving scores of 117-11 and 116-114 – while one official ruled that Essomba had done enough, to the score of 116-113.

In a lightweight contest, Alin Florin Ciorceri earned a hard-fought win over Levi Kinsiona with the single scorecard being 77-76 for the winner. Ciorceri improved to 17-3-1 (7 KOs) while Kinsiona is now 9-3 (1 KO).

Earlier on, Ishmael “Black Panther” Davis improved to 10-0 and sent Dustin Ammann to sub .500 territory (7-8 now) in a junior middleweight contest. Ammann’s corner threw in the towel midway through the 5th round.

In the first fight of the broadcast, Nicolie Campbell improved to 10-1 with a six-round rout of Frane Radnic (now 11-35) in a one-sided super middleweight affair. The single scorecard of 60-54 by referee Howard Foster tells the whole story.