Masataka Taniguchi to defend title against Melvin Jerusalem on Jan. 6 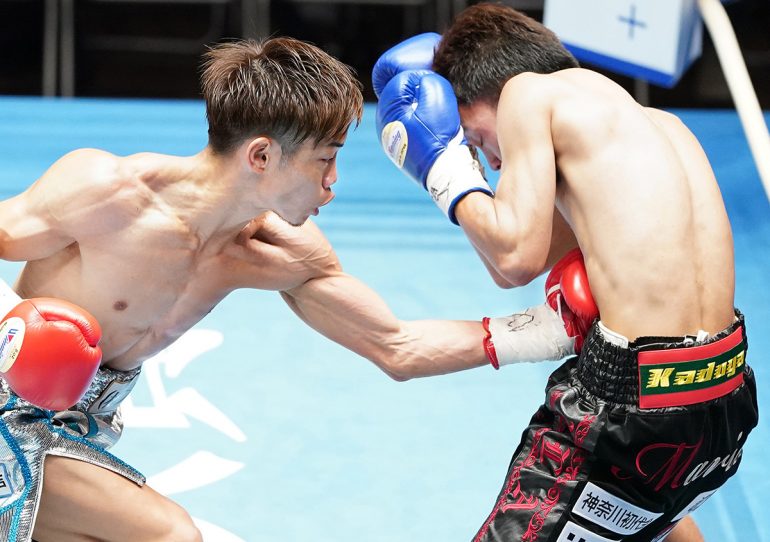 Masataka Taniguchi (left) on the attack against Hizuki Saso in 2020. (Photo by Naoki Fukuda)
11
Nov
by Anson Wainwright

News has reached The Ring that WBO strawweight titleholder Masataka Taniguchi will defend his title against Melvin Jerusalem at the EDION Arena in Osaka, Japan, on January 6.

Since then, the 28-year-old southpaw has piled up one success after another, claiming the Japanese national title before upsetting Wilfredo Mendez via 11th-round stoppage to claim WBO laurels. In his first title defense, he stopped compatriot Kai Ishizawa (TKO 11).

Jerusalem (19-2, 11 KOs) turned professional in 2014. He bested former world champion Florante Condes (MD 8) and experienced campaigner Jonathan Refugio (UD 10) on his way up. The Filipino gave then-WBC titlist Wanheng Menayothin all he could handle, ultimately losing a 12-round unanimous decision but only by a razor-thin margin, with the fight taking place on Menayothin’s home turf.

The 28-year-old surprisingly dropped a decision to Joey Canoy (UD 10) but has rebounded with eight successive wins, which included winning the OPBF title.