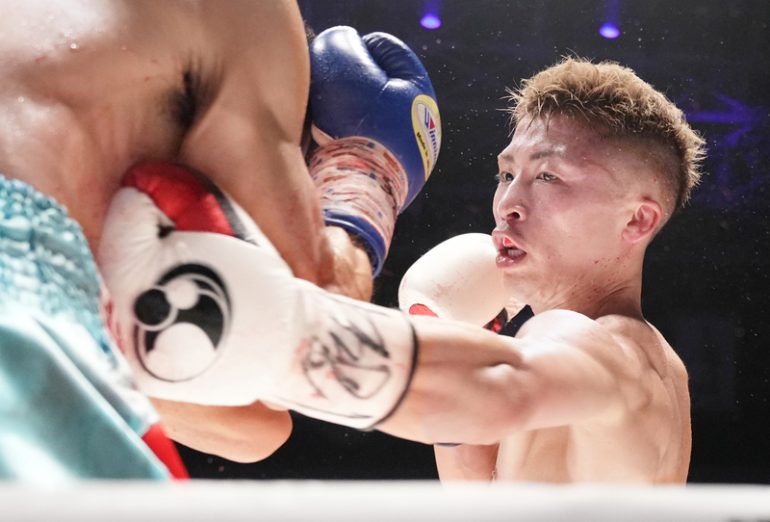 Japanese star Naoya Inoue retained his Ring Magazine, IBF and WBA bantamweight titles by scoring a one-sided eighth-round stoppage of Aran Dipaen at the Kokugikan Hall in Tokyo on Tuesday. The official time was 2:34.

Inoue, who improves to 22-0 (19 KOs), was on the hunt throughout and wobbled his overmatched opponent badly in the seventh. In Round 8, the champion was scoring multi-punch salvos at will and Dipaen went down heavily from a left hook. The Thai fighter rose gamely, but another left hook landed flush and forced referee Michiaki Someya to end the slaughter.

Dipaen is now 12-3 (11 KOs) and there was nothing on his record to suggest that he should be contesting a world title. While the 30-year-old managed to last into the eighth round, he absorbed an inordinate amount of punishment in that space of time and it’s embarrassing that he entered the ring as the IBF’s No. 5 challenger.

The 28-year-old Inoue is one of the finest pound-for-pound fighters in the world today and a fight likes this is several levels beneath him.

Home fighter Masataka Taniguchi claimed the WBO strawweight title at the second time of asking by scoring an impressive 11th-round stoppage over Wilfredo Mendez. The official time was 1:08.

Taniguchi, who was rated No. 8 by The Ring at 105 pounds coming in, dropped Mendez in the second round and closed out well with a sustained burst in the 11th that forced referee Nobuto Ikehara to save the Puerto Rican fighter for another day.

In 2019, Taniguchi (15-3, 10 KOs) was outpointed by then-WBO 105-pound titleholder Victorio Saludar. The 27-year-old, who resides in Tokyo, had bounced back with three straight wins, two by stoppage, to earn his second world title shot.

Mendez loses for the first time in three-and-a-half years and drops to 16-2 (6 KOs).