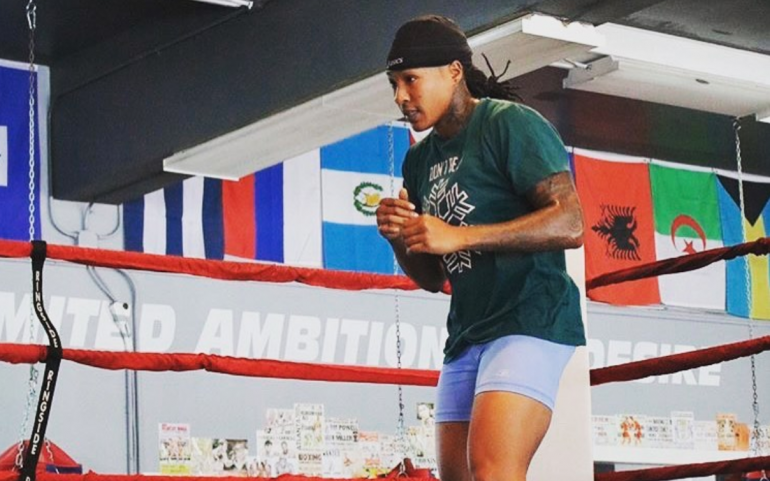 There’s a saying about letting go of something that you love, and getting to hold on to it forever if it returns to you.

That was the deal that Shadasia Green had to make as a teenager, when she found herself stuck between her boxing dreams, and the inevitability of collegiate basketball. Her dalliance with boxing was only meant to supplement her basketball training, a way to get in shape and improve her footwork without having to pound the pavement in the early mornings before school. Green walked into the gritty Ike and Randy’s Boxing Gym in her native Paterson, N.J. at age 15 and met Barry Porter, who honed her skills through repetition and individual attention.

Green was one of the best high school players in the state of New Jersey, was a McDonald’s All-American nominee and was averaging 21 points and 5 rebounds per game at Paterson Eastside High School, but she felt a change in her heart. It was boxing she loved, not basketball.

That all came to a head when Green received letters of intent from nearly every women’s college basketball program in the country.

Her mother, Rechelle, found Porter’s number and ordered her back home to make a decision.

“I told my mom, ‘I can go to the Olympics, what are you doing?’ She’s just like, ‘You need your education. Go to school, meet new people, travel the world, play on a high platform and when you get your degree I’ll give you your life back,’” Green recalls.

That’s exactly what Green did. After four years of playing Division I basketball at Old Dominion University, Green received her Bachelor of Science degree in Recreation and Tourism Studies. She once caught the attention of legendary University of Tennessee coach Pat Summitt, who ordered the Lady Vols to lock her down on defense during a hot game for Green. There were some offers to play professional ball overseas, maybe even the WNBA, but the politics of basketball had worn her down. She was ready to devote her life to boxing.

Now she prepares for her biggest test as a professional, when she faces former WBA featherweight titleholder Ogleidis Suarez (30-4-1, 14 KOs) this Saturday in an eight-round bout at Gila Rivera Arena in Glendale, Ariz. The fight will be part of the Jake Paul vs. Anderson Silva pay-per-view undercard, and will be streamed live on Showtime Sports’ social media platforms.

“I expect quite a challenge, especially in the experience factor. I know that she uses the jab, she moves around. I’m excited to go against and test my skills against such a high caliber opponent,” said Green of the Venezuelan Suarez, who hasn’t fought since 2020.

“I’m grateful for the opportunity to showcase my skills on the highest platform, and I think what Jake Paul is doing for women’s boxing is amazing.”

Green moved quickly as an amateur, making the U.S. national team as a heavyweight after just five fights. She won silver at the 2016 AIBA Women’s Boxing World Championships in Astana, Kazakhstan, dropping a decision to the home country fighter Lyazzat Kungeybayeva.

Prior to turning professional in 2019, Green added trainer Aroz “Terrific” Gist as head trainer, while retaining Porter as an assistant. Among the first decisions under her new coach was to drop from heavyweight to super middleweight, shedding 40 pounds through diet.

“They never hold back because she’s hurt a couple of them a couple of times,” said Gist. “Sometimes they tell me ’T, I’m not in shape yet to spar her. Give me another week.’”

The partnership has paid dividends early on, with Green going the distance just once, in a six-round shutout win over Irais Hernandez in Wilkes-Barre, Pa. back in 2019. Despite her knockout record, Green asserts that she has the skills to match up with anyone, including undisputed super middleweight champion Franchon Crews Dezurn and undisputed middleweight champion Claressa Shields, both of whom she sparred with extensively while on the U.S. team.

Green and co. hope to meet Crews Dezurn again soon, this time in the professionals.

“I do have a hit list but it’s not specific to anybody. Whoever is in my way and whoever I have to get through to put myself where I’m the mandatory to Franchon Crews, I’m willing to fight,” said Green.

Shields had recently cited Green as one of the best female boxers she had been in the ring with. Green says the feeling is mutual, and believes a showdown between the two as professionals could be big business.

“I think Claressa Shields has a championship mindset and she wants to fight the best. In that aspect she has my respect 100 percent. I think that could be a mega-fight for women’s boxing,” said Green.