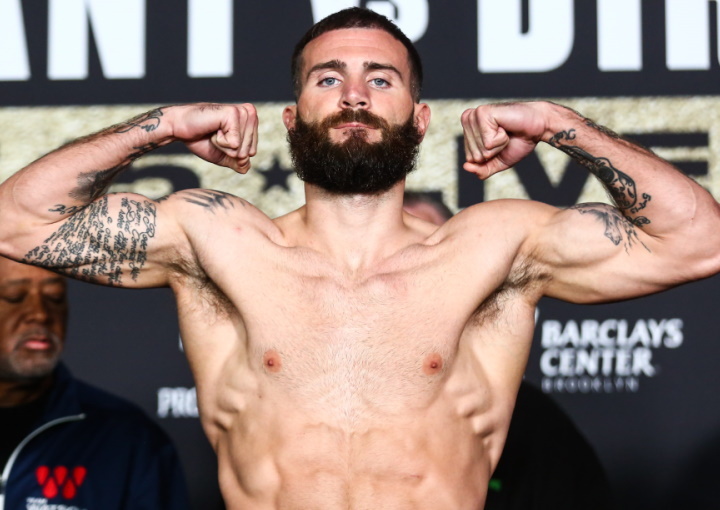 NEW YORK — Caleb Plant and Anthony Dirrell had been jawing at each other for weeks leading up to their WBC super middleweight title eliminator on Saturday on a FOX Sports PBC Pay-Per-View from Barclays Center, in Brooklyn, New York.

The two jawed at each other leading up to the fight, during the weigh-in, and for a good portion of the fight itself.

They jawed at each other until Plant clocked Dirrell in the jaw with :07 left in the ninth, putting Dirrell out with an emphatic knockout at 2:57 of the ninth.

At the time of the knockout, judges Kevin Morgan and Robin Taylor had Plant up 79-73, while judge Steve Weisfeld had it 80-72 for Plant.

“This win felt good,” Plant said. “You’ve heard about how much he hates me, but my head and my heart is what won me this fight. I was in control the whole time. My coach told me to stay patient and ease in and that’s what we did. Then, boom!

“I’m ready for whatever. I’m going to spend some time with my family, but then I’m ready for the biggest fights that we can make.”

It was an ugly fight.

Plant (22-1, 13 knockouts) and Dirrell (34-3-2, 25 KOs) seemed to wrestle more than box. There were numerous occasions when the two wound up on the canvas, tangled with one another.

Dirrell was having fun through much of the fight. He was playing to the crowd, winking, mocking Plant, putting his palms up and shrugging his shoulders. Dirrell even derided Plant in the sixth, when he sprinted back to his corner in an animated manner.

It was Plant, however, that landed the big punch.

Plant set up Dirrell in the closing seconds of the ninth with a left to the body, forcing Dirrell to drop his hands, and then he followed that up with a left hook on the chin that spelled the end.

Referee Harvey Dock, who showed great patience in dealing with the antics of both fighters, waved it over at 2:57.

Plant reacted by pretending to shovel dirt over the fallen Dirrell.

“We knew that Negron was going to be tough and he definitely gave it his all,” Sanchez said. “He was tough for nine rounds, but the knockout was inevitable. I have nothing but respect for Negron, he fought a good fight. I just did what I had to do.

“I knew that the last three rounds I was going to step on the gas and knock him out late.”

Negron was taken to Lutheran Hospital for evaluation following the bout.

Neither did much of anything the first four rounds. Sanchez kept a steady attack. He tactically neared Negron (25-4, 20 KOs) and landed a shot to the body, or head, but nothing substantial enough to rock Negron.

Sanchez did not do anything significant until the sixth, when with 1:02 left in the round, Sanchez nailed Negron with a right on the chin. Midway through the seventh, Sanchez landed a big right, only to be pushed down seconds later, which referee Ricky Gonzalez rightfully called a slip.

By the ninth, Sanchez was closing in. He dropped Negron with a right with 2:26 left in the round, putting Negron on his knees. Negron was clearly hurt when he got up. Sanchez put on more heat but Negron could not keep him off, when Gonzalez ended it at 1:36.

“I’m a highly-rated fighter, so I feel like a mandatory shot for the world title is coming. I’m just looking forward to fighting the best that the division has to offer. Hopefully the fans will get to see me in those big fights next year.”

This time, there was a winner.

Emmanuel Rodriguez (21-2, 13 KOs) pulled off a stunner by dominating southpaw Russell in winning a unanimous technical decision. Referee Benjy Esteves stopped the fight :02 into the 10th round at the recommendation of the ringside doctor, after Russell and Rodriguez’s heads clashed in the closing seconds of the ninth.

The two met in August 2021, when Rodriguez and Russell smacked heads about 10 seconds into the fight, which opened a cut on Rodriguez’s forehead that turned the fight into a no-contest.

“I knew that I was dominating the fight,” Rodriguez said. “When I knocked him down, I thought his corner should have stopped the fight. He wasn’t right at that moment. The head butt definitely hurt, but I feel like I could have fought on. I’ll get it checked out, but I’m okay.

“I’m going to get a little rest now, then I want to come back and fight for the world title.”

“If you get knocked down with a good shot, you obviously feel it,” Russell said. “People like to lie about that. But I was conscious and able to regain myself. It was the first time I was ever hurt in a fight, but I was prepared for it.”

In the closing seconds of the ninth, Russell leaned forward and caught Rodriguez with the crown of his head under Rodriguez right eye, opening a cut on his cheek. Rodriguez fell to the canvas and Esteves gave him time to recover.

“The head butt was just because of how our feet lined up,” Russell said. “He was ducking his head a lot and not trying to fight on the inside. He was trying to hold on the inside and that was smart. He’s a good fighter.”

At the outset of the 10th, ringside doctors determined Rodriguez could no longer go on, turning the fight over to the scorecards.

Russell survived the round, but the doctors checked on him between rounds.

In the waning seconds of the ninth, Russell’s forehead slammed under the right eye of Rodriguez, opening a cut on his cheek. Rodriguez fell to the canvas and Esteves gave him time to recover.

Ringside doctors looked at Rodriguez’s cut before the 10th and determined he was unable to go on, turning the fight over to the scorecards.

“He was the better fighter today,” Russell said. “I felt like he out pointed me. I thought I started to pick it up after the fifth round but it wasn’t enough.”