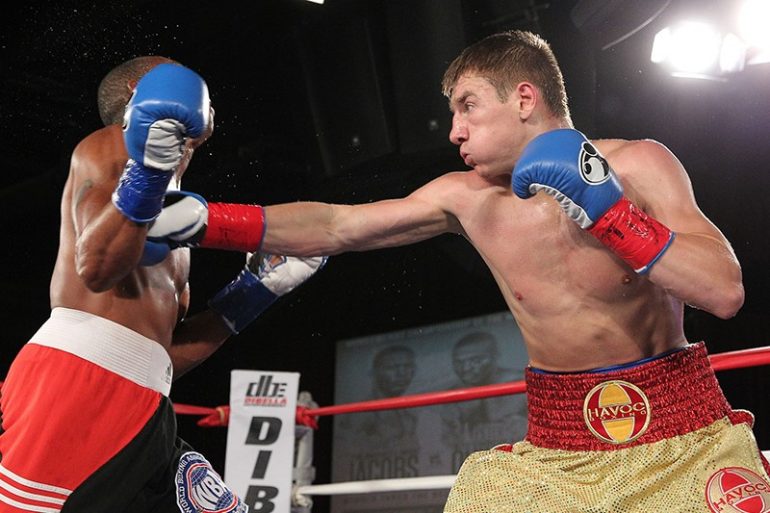 The welterweight division is one of the deepest in boxing and several fighters are hoping to be in the mix within the year.

At Wednesday’s weigh-in, Golub weighed in at 150.6 pounds, while Tucker weighed 152.

Golub (20-1, 15 knockouts), who is originally from Gorlovka, Ukraine, and now resides in Brooklyn, last fought on August 3 of last year, dropping Eric Walker twice en route to winning a 10-round unanimous decision.

The 33-year-old has won his last seven fights since losing by decision to Jamontay Clark in June 2017. Many ringsiders felt that decision was controversial.

The hard-hitting Golub has attempted to stay as busy as possible, mostly fighting on cards promoted by Lou DiBella.

“He has been one of the most overlooked, unlucky, quality fighters in boxing,” DiBella told The Ring Wednesday afternoon. “He was released by PBC (Premier Boxing Champions) after getting robbed [against Clark] in a clear victory. [It was] a dirty, inexplicable decision. He is really undefeated and should be very highly ranked.

“With most welterweights being on one platform, it has been very difficult to secure him an opportunity. His chance is overdue and we will be working overtime to secure it after a big win this week.

“We offered Golub to 30 fighters, literally, who (all) turned Thursday night’s fight down.”

Tucker (15-3, 9 KOs) is also coming off a long layoff. The southpaw from Toledo, Ohio, has not fought since knocking out Eric Palmer in the opening round on August 5 of last year. The win over Palmer snapped a three-bout losing streak.

In the main event, former WBO female featherweight titleholder Heather Hardy (22-2, 4 KOs) of Brooklyn will square off against Colombia’s Calista Silgado (20-15-3, 15 KOs) in a six-round bout.