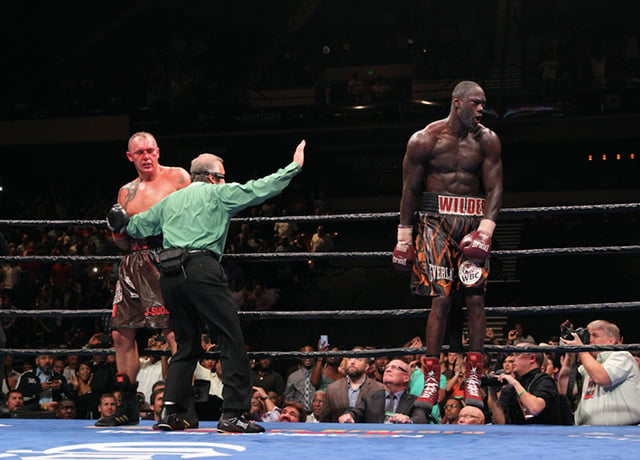 It’s very rare for a “Bronze Bomber” victim not to hit the deck… but it happens.

On Sept. 26, 2015, Deontay Wilder retained the WBC heavyweight title for a second time with a punishing 11th-round stoppage of near-bulletproof Frenchman Johann Duhaupas at the Legacy Arena in Birmingham, Alabama. The official time was 0:55.

Wilder, who won the vacant title by outpointing Bermane Stiverne (UD 12), and halted Eric Molina (KO 9) in his maiden defense, was comfortable for most of the fight. However, the visitor did work the jab effectively in spots and crossed over the right hand enough to almost close the defending champ’s left eye.

However, the difference in fire power was telling. Duhaupas stood up to some hellacious shots and was essentially saved from himself. A big one-two put the challenger on the backfoot in Round 11 and a strong follow-up assault convinced referee Jack Reiss to save Duhaupas for another day.

“He did everything we expected him to,” Wilder said during his post-fight interview. “We knew he was mentally tough. He’s got a hell of a chin. He was very strong. I see why he’s never been stopped before. He did an excellent job and definitely had my respect.”