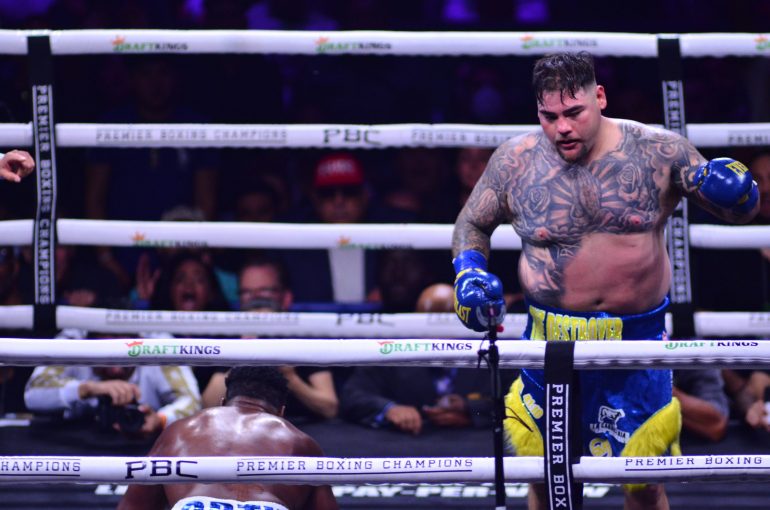 LOS ANGELES – Andy Ruiz had a lot to prove Sunday night, including to doubters who did not think he could continue being a heavyweight contender and who thought Luis Ortiz would defeat him.

Not only did he prove he is still one of the best fighters in the division, but he could come out victorious against a dangerous, hard-hitting foe.

The clash against Ruiz was a battle between fighters ranked in the top 10 by The Ring. Ruiz and Ortiz are ranked No. 5 and 6, respectively.

Both fighters were assertive from the opening bell, standing in the center of the ring and exchanging combinations.

During the second round, a right hand to the top of the head dropped Ortiz to the canvas. Ortiz beat the count, but was pushed down to the canvas, but referee Thomas Taylor still administered a standing eight-count on Ortiz. To his credit, Ortiz came back strong during the round, rocking Ruiz twice with left crosses to the head.

Andy Ruiz gets his third knock down of the fight late in the 7th round!#RuizOrtiz pic.twitter.com/dcEa7HqCxu

Ruiz was able to utilize his deceptive hand-speed to outbox Ortiz during the middle rounds. As the bout progressed, the pace of the fight slowed, which favored Ortiz.

During the seventh round, a round that Ortiz was winning, a right hand from Ruiz dropped Ortiz to the canvas. Ortiz was not visibly hurt from the punch, beating the count and engaging Ruiz until the bell sounded to end the round.

Ortiz had his moments as the bout progressed towards the championship rounds. He would continue working behind a consistent jab, keeping Ruiz at distance and even throwing off any combinations Ruiz was attempting to throw and land.

Sensing he was down on the scorecards, Ortiz was the aggressor during the final round. Twice Ortiz landed left crosses that Ruiz took well. He let his hands go, but was not able to again land anything consistent as the bell eventually sounded to end the fight.

Ruiz acknowledged after the fight he was wary of Ortiz’s punching power, but made adjustments during the fight.

“He’s a warrior and he hits hard,” said Ruiz, who resides in Imperial, California. “I was countering him when he wanted to load up.”

Andy Ruiz answers back with a BIG knock down!#RuizOrtiz pic.twitter.com/XZrwZBwG1V

Ruiz has come a long way since losing to Anthony Joshua in December 2019. Six months before, Ruiz was on top of the heavyweight division, having stopped Joshua to win the unified heavyweight title.

Despite the setbacks, Ruiz made a conscious decision to remain disciplined in the gym and lost considerable weight as well. He hopes to return to the ring again soon after proving naysayers wrong.

“People were doubting me and saying that I was going to get knocked out,” said Ruiz. “I don’t want to wait a long time in between fights. I want to fight three or four times a year. I want to be champion again and bring the title back to Mexico.”

Ortiz, who is originally from Camaguey, Cuba and now resides in Miami, Florida, drops to 33-3, 28 KOs. He was coming off a knockout win over Charles Martin on January 1, a fight in which he had been dropped twice before knocking out Martin in the sixth round.