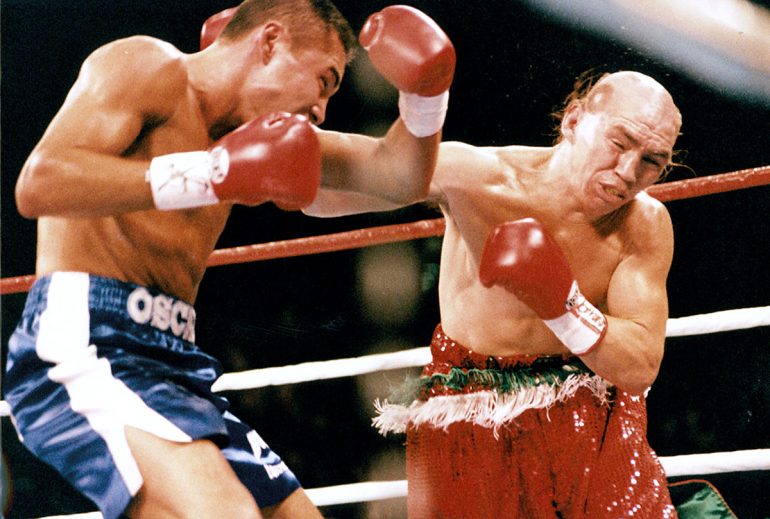 He was a lightweight with a middleweight left hand.

On July 29, 1994, Oscar De La Hoya scored a thunderous second-round knockout of Jorge Paez to win the vacant WBO lightweight title at the MGM Grand in Las Vegas. The official time was 0.39.

Having become Olympic champion at Barcelona 1992, De La Hoya entered the paid ranks as “The Golden Boy.” He moved fast, dethroning WBO 130-pound titleholder Jimmi Bredahl in just his 12th fight. The East LA star defended once, getting off the floor to batter Giorgio Campanella in three, before targeting the 135-pound division.

Paez was a colorful 63-fight veteran and a former featherweight titleholder. The Mexican showman had less success at 130 and 135 pounds, but he was still competitive in title bout losses to Tony Lopez (UD 12), Pernell Whitaker (UD 12), Rafael Ruelas (TKO 10) and Freddie Pendleton (UD 12).

Against De La Hoya, he didn’t have a prayer.

Early in Round 2, Paez was caught by what De La Hoya labelled “the 45,” which referred to the angle of his explosive half hook-half-uppercut with the left hand. Hurt by the punch, Paez gamely let his hands go, but another 45 landed flush on the jaw and put the ex-champ down for the count.

ON THIS DAY: TONEY TURNS THE LIGHTS OUT ON WILLIAMS