On this day: James Toney turns out the lights on Prince Charles Williams 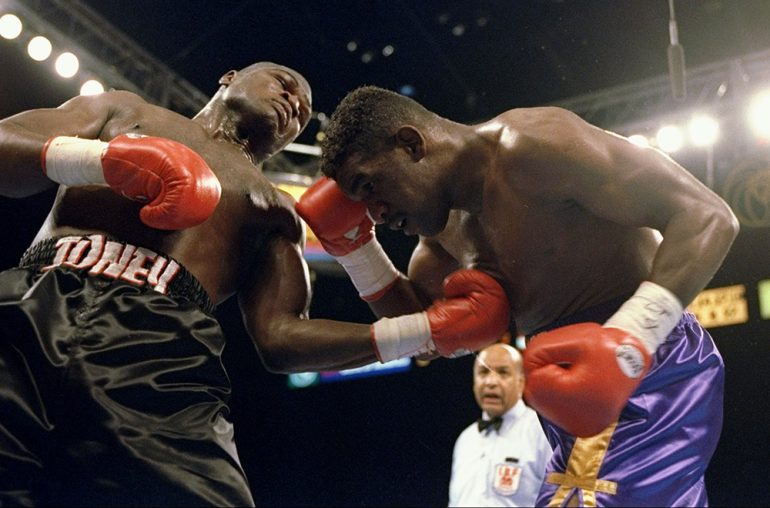 James Toney digs a left to the body of Prince Charles Williams. Photo by Al Bello/ All Sport
29
Jul
by The Ring

What a terrific 12-round fighter he was.

On July 29, 1994, James Toney produced a sensational 12th-round knockout of “Prince” Charles Williams to retain his IBF super middleweight title at the MGM Grand in Las Vegas. The official time was 2:45.

Toney, a former middleweight champion, was making the third defense of his 168-pound championship. “Lights Out” had won his second divisional title with an excellent performance against Iran Barkley (TKO 9) and turned back the challenges of Tony Thornton (UD 12) and Tim Littles (TKO 4).

However, Williams would be the strongest fighter Toney had encountered as a pro.

A long-reigning IBF light heavyweight champion, Williams made eight successful defenses. His most notable wins came against Bobby Czyz (TKO 10) and James Kinchen (TKO 2) before he was dethroned by unbeaten German Henry Maske. Williams had a suffocating and swarming style which threatened to be more effective at the lower weight.

The fans enjoyed a competitive fight early. Williams stayed in close, limited Toney’s punching room and banked rounds with a high work rate. However, the champion soon adjusted and began working his opponent’s body. And when those punches took effect, Toney targeted the head with crisp power shots.

As the final round played out, the expected result was a points win for Toney. The old-school stylist from Ann Arbor, Michigan, already had a money-spinning superfight with Roy Jones Jr. scheduled for the fall and he couldn’t be blamed for playing it safe.

With less than 30 seconds remaining in the bout, Toney followed a jab with a blockbuster straight right to the jaw. Williams went down as though he’d been struck by lightning and didn’t come close to beating Joe Cortez’s 10-count.

“Everything (trainer) Bill Miller taught me over the years worked in that fight,” Toney told The Ring years later. “I was taught to weaken my foes and then take advantage of them. I would slip and counter in the first half (of a fight), just touch them with accurate punches, and then land the power down the stretch. I wore my opponents down mentally, too, because I always talked to them. I’d say anything, I’d talk about their mommas, just to get in their head. But Charles didn’t talk back.”