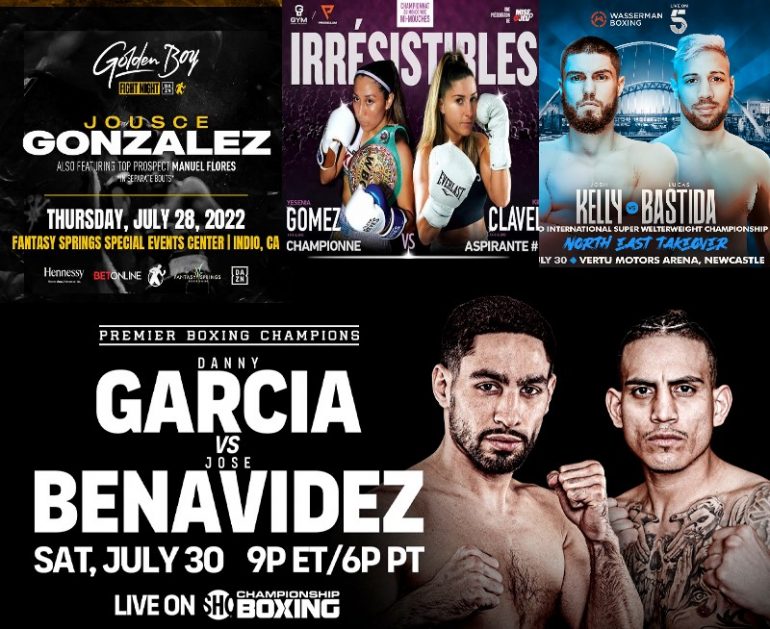 Unbeaten rising lightweight prospect Gonzalez takes a step up to face Ecuador’s Jose Angulo in what could be an entertaining eight-rounder.

Flores is an unbeaten local product who will try to get the support of his folks in this homecoming bout as he gets ready to take his show on the road looking for bigger and better things.

The Kazakhstan native based in Brooklyn is starting to raise some eyebrows, and Mexico’s once-beaten Moreno should be a solid state in this stage of his career.

The tall, unbeaten Fundora (sister of junior middleweight contender Sebastian) is one of the fastest-rising stars in women’s boxing, and she will be making serious headlines in the future. Catch her early in her career while you can.

A rare Mexican title fight taking place overseas. Mexico City’s Carmona and Tijuana’s Santiago may be a long way from home, but they are close to deliver one of the weekend’s hidden jewels.

Uruguay’s unbeaten young lion Vidal gets another homecoming bout after honing his skills in Los Angeles for a while. A battle-tested Diaz will cross the river from Argentina to check on his progress. Should be fun.

Graduation night for Clavel? Perhaps. The feisty diminutive Canadian is long overdue for a title shot (it was postponed due to Clavel, a registered nurse, testing positive for COVID back in April), and this is her chance. Gomez will try to defend her WBC trinket in this terrific matchup in one of women’s boxing’s best weight classes.

“The Chechen Wolf” has been clamoring for more exposure since his Olympic days representing Canada back in 2016. He’ll get his chance here as he prepares for bigger challenges down the road.

This main event has been cancelled, but it would be interesting to keep an eye on the broadcast to see who (and if) they will feature in the replacement bouts, if any.

In the highlight of the entire weekend, two-division world champion Danny Garcia makes his super welterweight debut against Jose Benavidez Jr in the main event of a star-studded card. A terrific do-or-die clash for two hungry and motivated fighters.

The always entertaining fan favorite Polish heavyweight Adam Kownacki makes his ring return against Turkish Olympian Ali Eren Demirezen in a worthy co-main event that could easily end up giving us the knockout of the night.

Superb boxer-puncher Gary Antuanne Russell takes on Cuba’s Rances Barthelemy in what should be an intense clash. If the best Barthelemy shows up, it will be a long night for Russell.

Former GGG challenger and an underrated talent, Sergiy Derevyanchenko is out to prove his time hasn’t come yet, and Joshua Conley will help us gain some knowledge of where he stands in terms of progress in this interesting ten-rounder.

Rising prospect Vito Mielnicki Jr. is a fast, slick boxer-puncher with matinee idol looks. He will be taking on Jimmy Williams in an eight-rounder that is just perfect to showcase his progress.

Headlining in his hometown, Billam-Smith puts his European and Commonwealth belts on the line against Chamberlain.

Nice trio of showcase bouts by a handful of former Olympians. Whitaker will soak up all the attention in what will be his long-awaited pro debut after winning the light-heavyweight silver medal at the Tokyo Olympic Games last year.

Where to watch it: Sky Sports (UK) Fite.tv (US)

Argentina’s Bastida will travel abroad for the first time to take on England’s Kelly in a battle of once-beaten young contenders ready to prove they belong in the big leagues.

The nephew of British boxing legend Chris Eubank Sr. and cousin of middleweight contender Chris faces Mexico’s Eliot Chavez as he tries to put his career in second gear.