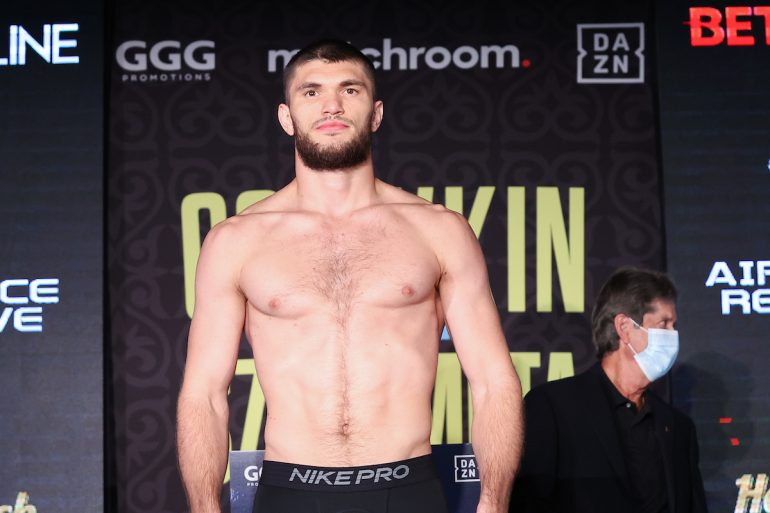 Ali Akhmedov and Gabriel Rosado will clash in a super middleweight bout on September 17 at the T-Mobile Arena in Las Vegas, Nevada, as part of the undercard to the trilogy clash between Saul ‘Canelo’ Alvarez and Gennadiy ‘GGG’ Golovkin.

The event, presented by Matchroom, Canelo Promotions and GGG Promotions, will broadcast live on DAZN Pay-Per-View in the U.S. and Canada as well as around the world on DAZN (excluding Mexico, Latin America, and Kazakhstan)​.

Akhmedov (18-1 14 KOs), promoted by GGG Promotions, bagged a pair of wins inside the distance in 2021 in California to get his path to major title fights back on track after suffering a final round KO defeat to Carlos Gongora in December 2020.

That was Akhmedov’s third fight on a card topped by his fellow countryman, promoter and Kazakh legend Golovkin, and the big hitting 27 year old will be looking to use the biggest of stages to impress against the Philly star.

Rosado (26-15-1 15 KOs) enjoyed thrilling success against his last eastern European foe, landing a knockout of the year contender when he landed a stunning right hook to demolish the unbeaten Uzbek rising star Bektemir Melikuziev in the third round of their clash in El Paso in June 2021.

Rosado, who fought GGG for the middleweight title in January 2013, has tangled with two contenders in his recent bouts, being edged out via majority decision by Shane Mosley Jr in April after taking Jaime Munguia the distance in November – making this a must-win for the 36 year old.

“I’m happy to be a part of this show on DAZN PPV,” said Akhmedov. “It is a great opportunity for me to demonstrate my skills, especially against such seasoned opponent as Gabriel Rosado. Rosado is very experienced and has a history of fighting the best talents in this division which motivates me even more.”

“I’m looking forward to being a part of one of the biggest fight cards of the year,” said Rosado. “This is an opportunity to do what I did against Bektemir and put myself right back in world title contention!”

“I am very happy for Ali that his next fight will be on DAZN PPV,” said Golovkin. “And it will be a title fight. It gives Ali an opportunity to show everything he’s capable of and make a great impression. As his promoter I have a lot of confidence in Ali and I believe the time has come for him to make a name for himself.”

“This fight will be like a 4th of July,” said Rosado’s trainer Johnathon Banks. “It will be full of fireworks with youth vs experience.”

Akhmedov’s clash with Rosado is the latest addition to the stacked undercard for September 17, led by a co-main fight starring Super-Flyweight sensation Jesse Rodriguez defending his WBC belt against Israel Gonzalez.

Diego Pacheco fights for his first pro belt when he meets Enrique Collazo in a super middleweight bout and Austin ‘Ammo’ Williams taking on Kieron Conway in a middleweight clash, all leading into the third installment of the classic modern rivalry between Canelo and Golovkin, with the Mexican king putting his undisputed super middleweight crown on the line against Kazakhstan’s reigning WBA and IBF middleweight ruler in the most anticipated match up of 2022.