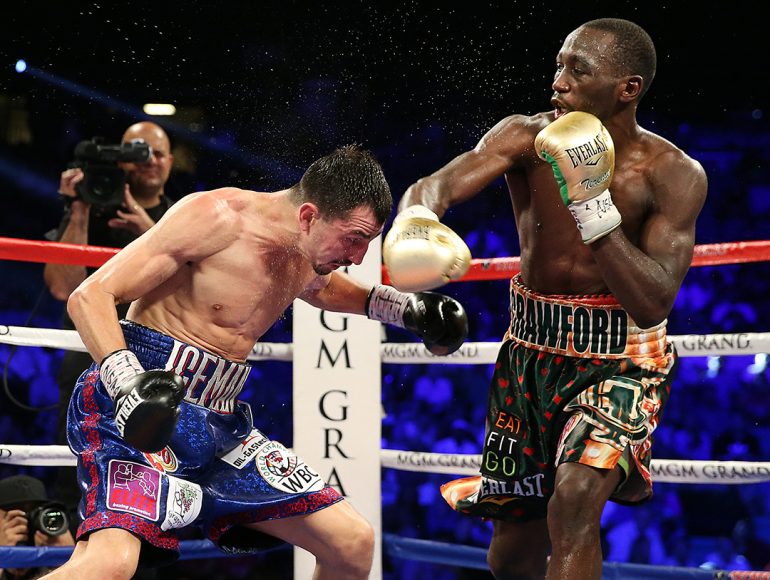 Crawford (right) in an underrated triumph over the then-unbeaten world titleholder Viktor Postol. Photo by Mikey Williams/ Top Rank
23
Jul
by The Ring

A victory that has aged very well.

Both men entered the fight as unbeaten world champions with 28-0 records. Crawford, a former lightweight beltholder, had moved up to 140 pounds and captured the vacant WBO title. Ukraine’s Postol was coming off a career-best win over Lucas Matthysse (TKO 10) that saw him capture the WBC version.

The winner would also be crowned The Ring junior welterweight champ.

As the scores indicate, Crawford was largely dominant. Displaying his incredible versatility, the Omaha native boxed most of the fight out of the southpaw stance. He befuddled the visitor, flooring him twice in Round 5 and banking the vast majority of the rounds. Postol required a stoppage long before he was deducted a point for punching behind the head in the 11th.

“I am at the top, I think my performance today put me up there [on pound for pound lists],” said Crawford during his post-fight interview with HBO.

“It was a unification fight and no one is doing that these days, taking on a big threat who is undefeated.

“This wasn’t my toughest fight. Not taking any credit away from Postol, it’s just that I feel the Yuriorkis Gamboa fight (June 2014) was tougher.”

The quality of Crawford’s performance cannot be denied, especially since Postol would go on to give both Jose Ramirez and Josh Taylor serious tests in decision losses.