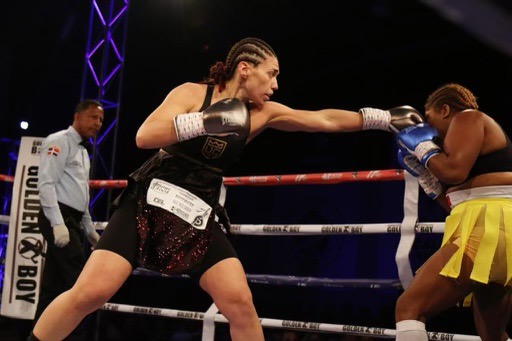 Jenna Gaglioti had been an athlete all her life, but found herself missing the thrill of competition as she settled into a post-college life of building her personal training and mentoring businesses.

The New York native had played softball and basketball in her younger years, but put her focus on academics as she completed her Bachelor’s degree in biology at St. Peter’s University in Jersey City.

The itch to compete never went away and she walked into Gleason’s Gym five years ago, where she had three amateur fights. When the rush of trading punches in headgear wasn’t enough, she decided to turn pro last October.

“I’m a little older. I’m 31 so I didn’t feel like amateurs was a good fit for me,” said Gaglioti, a Jersey City resident who has built a 3-0 (2 knockouts) record while fighting in the Dominican Republic.

The middleweight boxer will have her first bout in her home state of New Jersey when she faces Miranda Barber (2-4, 1 KO) in a four-round bout on July 29 at The American Dream mall in East Rutherford. The Abella Promotions card will be headlined by junior welterweight contender Julian Rodriguez, who is returning to the ring after his first pro defeat.

Barber, 28, of Boca Raton, Fla. could serve as a measuring stick for Gaglioti, having gone the six-round distance in a shutout loss to two-time world title challenger Marcela Cornejo last September.

Middleweight is far from the deepest division in women’s boxing, with only 22 boxers active in the division over the past year, according to Boxrec. While the sanctioning bodies typically will allow anyone ranked in the top 15 of their ratings to fight for a world title, the WBA rates just four contenders at 160 pounds, followed by six from the WBC.

The division remains top heavy, with two-time Olympic gold medalist and pound-for-pound star Claressa Shields holding three of the world titles, while her amateur rival Savannah Marshall holds the fourth title. They’ll meet on September 10 at the O2 Arena near London to settle the issue of supremacy at 160 pounds.

The lack of depth at the weight means Gaglioti could soon be on the shortlist of title challengers, but trainer Luis “Mosquito” Gonzalez says they’re in no rush with her development.

“She’s gonna grow up more. This is why we took a fight in NJ because her hometown people wanted to see her here,” said Gonzalez, who also manages her career.

Gonzalez, who runs Jersey City Recreation’s boxing program out of a city middle school, has primarily molded amateur champions out of young kids, but says the duo has meshed well in their partnership.

“Jenna is a very good listener. She’s very smart young woman, and when she wants something, she goes out and grabs it. That’s what is very important in boxing,” said Gonzalez.

Gaglioti has had to come up the hard way in the sport. She has just one female sparring partner, and has to spar with men to work on her craft in the gym. Without a promotional contract, Gaglioti relies on sponsors to cover the $5,000 in travel and other expenses per fight whenever she made a trip to the Dominican Republic.

Those trips allowed her the opportunity to fight on cards promoted by Miguel Cotto, a favorite boxer of hers growing up.

“Growing up, I watched Miguel Cotto all the time. He was one of my favorite fighters. So as a Puerto Rican, being able to fight on his cards was a truly amazing experience,” said Gaglioti.

“They both are paving a way for future fighters and females just in general but also giving back to their communities,” said Gaglioti.

Gaglioti hopes to fight two more times this year, and then take another trip to the Caribbean.

“Puerto Rico is back open for boxing again so I’m hoping to fight there this year. My team and I will be working on that,” said Gaglioti.