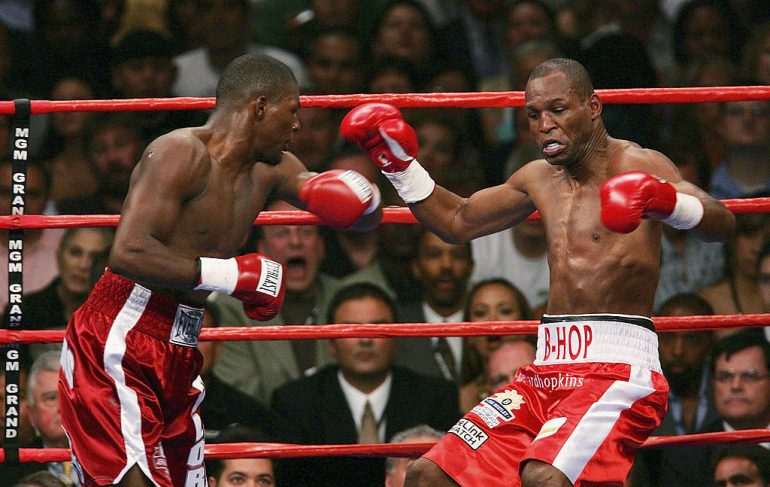 Photo by Ethan Miller/ Getty Images
16
Jul
by The Ring

Exuberance won out over experience.

On July 16, 2005, Jermain Taylor upset long-reigning middleweight king Bernard Hopkins on a 12-round split decision, laying claim to the undisputed championship of the world at the MGM Grand in Las Vegas. One judge voted 116-112 for Hopkins, but was overruled by two tallies of 115-113 for Taylor.

The 40-year-old Hopkins had been defying father time for years. The Philadelphia ring general won his first world title in 1995 and seemed to get better with age. Hopkins made 20 successful defenses (six as undisputed champion) and was a first-ballot Hall of Famer long before his career was over.

Taylor, 26, was an Olympic bronze medalist from Sydney 2000 with a 23-0 record as a pro. Developed perfectly for the paid ranks by manager-promoter Lou DiBella, many perceived Taylor as untested. However, he was quick, wonderfully athletic and very strong for the weight.

The styles didn’t gel on fight night. The action was cagey with the habitually patient Hopkins waiting for counter opportunities that rarely came. Taylor’s jab, omnipresent right hand, and physicality bothered “The Executioner” over the first half of the fight before Hopkins altered his approach. The great champion did apply pressure late, but it wasn’t enough to close the gap.

“[Hopkins] pushed me to the limit,” Taylor told The Ring years later. “The best fighter I ever shared a ring with. He fights with everything. You don’t know what he’s gonna throw – he may throw his head, he may throw his arm, you never know. He was real good at adjusting to your style.”

The pair would meet again, five months later, and Taylor bagged a 12-round unanimous decision at the Mandalay Bay Events Center.