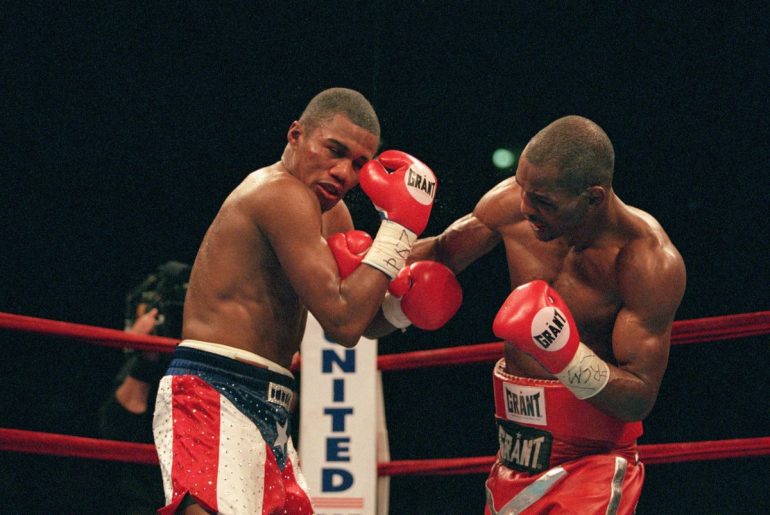 Hopkins was 35 years old and 13 years into his career before he scored his first truly significant victory vs. Felix Trinidad. Photo credit: Al Bello/Getty Images
01
Apr
by Tom Gray

Editor’s Note: This feature originally appeared in the December 2018 issue of The Ring Magazine.

At his very best, legendary two-weight world champion Bernard Hopkins wore opponents down like a virus, and on many occasions the symptoms continued long after the final bell.

More than any other fighter of his era, Hopkins became synonymous with destroying careers. In September 2001, Felix Trinidad entered Madison Square Garden as an “is” and left as a “was” after Hopkins thoroughly outclassed him with a punch-perfect display. The same fate befell Antonio Tarver, Kelly Pavlik and Jean Pascal. What’s even more remarkable is that all of these fighters were favored by the oddsmakers coming in.

Hopkins’ 28-year professional career is split into two Hall of Fame sections. There was the middleweight title run, which included wins over Glen Johnson, John David Jackson, Keith Holmes, Trinidad and Oscar De La Hoya. Then, following a pair of close decision defeats to Jermain Taylor, the ex-champion moved up two divisions to produce another slew of miracles at light heavyweight.

His ability to continually rise to the occasion in his 40s made Hopkins a veritable incarnation of former champion Archie Moore. As well as the longevity, Hopkins also inherited the “old school” skills of such warriors and was a master of his craft. “The Executioner” didn’t rescue victories from the jaws of defeat with a single shot like a 45-year-old George Foreman did against Michael Moorer in November 1994. In a young man’s game, Hopkins dominated fighters who were young enough to be his offspring, and that made him unique.

Hopkins finally hung up his gloves at the age of 51 following an eighth-round defeat to Joe Smith Jr. It is the only time the great former champion was stopped, but while it wasn’t the ending he or his fans deserved, there is no denying that Hopkins’ overall career was a massive success story. The Philadelphia native will walk into the Hall of Fame as a first-ballot inductee and will be remembered as one of the greatest middleweight champions of all time.

“My promoter at the time, Butch Lewis, and Don King, Mercado’s promoter, took me to Ecuador three days before the first fight and we’re 11,000 feet above sea level. Essentially I was being delivered to the farmer as a slave. We fought in Mercado’s country and they called it a draw. In the second fight, we’re in my country and my thoughts were, ‘You are mine! I’ve got you this time. You’re in my country, and what you didn’t do in your country, that’s on you. I’m not going to blow my chance in the United States.’ And I knocked him out in seven rounds. He’s not going to beat me in my house. We were only an hour away from Philadelphia. He couldn’t get a win over me in Ecuador, of all places. How can he win when we’re in America? The only way he could have won is if I didn’t show up.”

“I won that fight when I managed to get out of Puerto Rico alive after throwing the flag down at the press conference. I had won the fight from a mental point of view. I had done something that was bold and disrespectful, but it told Trinidad, ‘I’m not afraid of you!’ After that, I had to back up my actions by putting hard work in. I regret doing that with the flag now because I love visiting Puerto Rico and I’ve been over there about 10 times since the fight. But I can’t regret doing what I did at that particular time, because I had to be in that frame of mind. There were some people who stopped being fans of mine after that and figured I was racist, but that was not the case. That comes with maturity and I was 36 years old at that time. I knew what I was doing.”

“Oscar was ‘The Golden Boy’ and people were looking at me like I was silver. I had to be aggressive and make sure that the fight wasn’t close in any way, shape or form. I went in there knowing that if I didn’t knock him out, I couldn’t win the fight. I gradually figured Oscar out as the rounds passed, and that’s the calculating part of my style. I was also able to take more chances because, unlike Trinidad, Oscar didn’t bring his power up to middleweight. I was able to put my offense in front of my defense. I didn’t need to be as careful as I was against Trinidad. I’d tasted Oscar’s power over the first three or four rounds, and I was able to get him in an offensive mode. I couldn’t get him when he was in a defensive mode, but once I hit him between his punches, we got a knockout reaction with the liver shot.”

“I’d done everything there was to do in the middleweight division and I thought I definitely won the first fight with Jermain Taylor. There wouldn’t have been a rematch had I got that decision. The Tarver fight was all about history, and I love history. Sugar Ray Robinson had tried to move up and win the light heavyweight title against Joey Maxim. The heat was so bad that Robinson couldn’t answer the bell for the 14th round, and they also had to replace the referee because he was suffering from heat exhaustion. Robinson was winning that fight on all scorecards and the heat was the only thing that stopped him from being the first middleweight champion to win the light heavyweight title. Tarver had been shooting a Rocky movie and blew up to 200 pounds. I knew he had left it late [to get in shape], and that plus the movie was to my advantage. I hired my friend Mackie Shilstone (a highly regarded motivator/strength-and-conditioning coach) and went on a mission.”

“This fight was important because I overcame losses (the previous fight to Joe Calzaghe), at least one of which was a robbery (Jermain Taylor I). Pavlik had knocked out Jermain Taylor, who got two decisions over me. OK, but that was misleading. I don’t believe that I ever lost to Jermain Taylor. Suddenly everyone starts saying that I’m looking for a paycheck against Pavlik. They never said that with Roy Jones in 1993. They never said that in all the other fights. Now, all of a sudden, I’m going to get hurt and I’m just looking for a paycheck before I retire. They were so adamant that this country boy from Youngstown, Ohio, was the only man who could knock out Bernard Hopkins. After the fight, I stared down at the media at ringside and I was very serious. I wanted to let them know that I could look at them, say nothing, but tell them everything.”

“Quebec wasn’t too far away from the States, but I felt like I was fighting a lot further away from home. When we fought the first time, it was extremely cold over there. Pascal had a really good reputation, but I wanted to let everyone know that I wasn’t finished. Again, I thought I won the first fight and, just like with Mercado, I had to come back from two knockdowns. The standout thing in the Pascal rematch was the push-ups. That was bold. When I did the push-ups between rounds, Pascal actually stopped listening to his trainer. He heard the home crowd hollering and wanted to see what was going on. He suddenly sees an old man doing five or six push-ups when he couldn’t wait to get back to his stool at the end of the round. That was a classic, man. None of that was planned. You see, I’m an opportunist when it comes to executing mind games.”