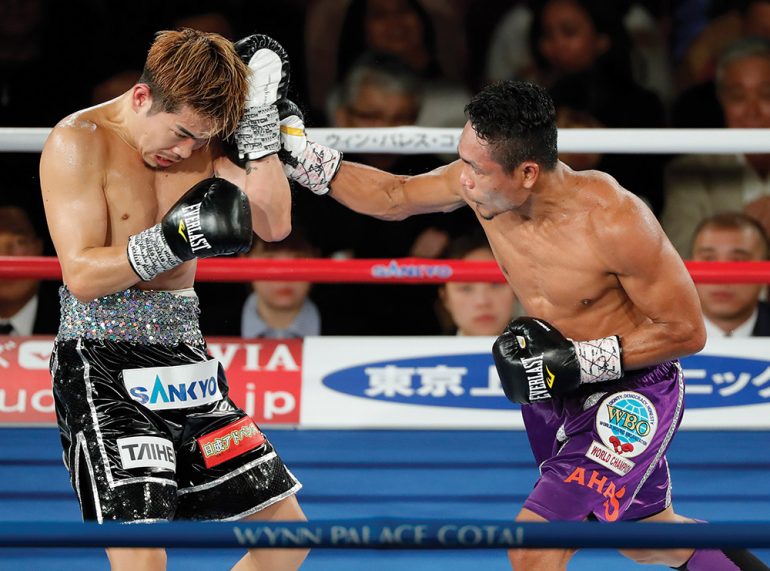 Donnie Nietes takes the action to Kazuto Ioka during their first WBO-pound title bout, which took place on December 31, 2018 in Macau. Photo by Kevin Lee/Getty Images
11
Jul
by Ryan Songalia

Donnie Nietes stands in rare company among Filipino boxers. Nietes, Manny Pacquiao and Nonito Donaire Jr. are the only three boxers from the Philippines to have won world titles in at least four divisions. Now, at the age of 40, the country’s boxing fans look to him to do it one more time.

Mark Magsayo’s defeat this past weekend to cede the WBC featherweight title to Rey Vargas has left the Philippines without a single world titleholder for the first time in over a decade. The country will get its first attempt to end that drought this Wednesday when Nietes faces WBO junior bantamweight titleholder Kazuto Ioka (28-2, 15 KOs) at the Ota-City Gymnasium in Tokyo, Japan.

Nietes, as cool as the blood running through the snake that adorned his shoulders during his early ring walks, approaches the task like business as usual.

“It motivates me a lot but I just don’t give pressure to myself. Boxing is a sports game, I just need to give my very best to be a champion again. It will be a reward for myself and the Philippines as well,” said Nietes (43-1-6, 23 knockouts) of Murcia, Negros Occidental, Philippines.

The bout will be the second meeting between Nietes and Ioka. Nietes won their first meeting on New Year’s Eve in 2018 by split decision, banking on early counterpunching and late aggression to pull out the win in Macau. The win earned Nietes the belt he will now challenge for, having vacated the belt in 2019, shortly before the purse bid for his mandatory challenge against his compatriot Aston Palicte.

The hope was that skipping a second bout with Palicte would open up the possibility of getting big fights against Roman Gonzalez, Juan Francisco Estrada or Srisaket Sor Rungvisai, but without a title belt, Nietes was a high risk, low reward proposition for those bigger names.

Vacating his title, coupled with the pandemic and the dissolution of his career-long promoter ALA Promotions, kept Nietes out of the ring for the entirety of 2019 and 2020, costing him valuable years of his fighting career. He returned to the ring in 2021 under the management of MTK Global, and then signed with Probellum last October.

His last two bouts in Dubai have come with mixed results: a decision win over Pablo Carrillo in April of 2021, followed by a split decision draw against Norbelto Jimenez last December.

“I don’t have any frustrations in vacating my title,” said Nietes. “Maybe a little disappointed because I vacated it to give chance for another Filipino, Palicte, to be a champion also but it didn’t happen. Now I am happy and excited to have a chance again in winning it back.”

Probellum President Richard Schaefer insists that Nietes is already a Hall of Fame caliber fighter, but says he still has more fight in him.

“It’s the right time to be in those weight classes and I would not be surprised if Donnie, once he’s world champion again, says: ‘Hey, I might as well add a few more titles,’” said Schaefer on the Probellum site.

Nietes agrees. He says he’s still fresh, nearly 20 years after turning professional. He has been training under long-time coach Edmund Villamor in Cebu City, Philippines, and says they’ve increased the intensity of their workouts as he’s gotten older.

The 33-year-old Ioka, himself a four-division champion, has kept busy since the Nietes loss, defeating Palicte by tenth round stoppage in 2019 to win the title he now holds, making four defenses of the belt, including a career-best performance in December of 2020, when he stopped his countryman Kosei Tanaka in eight rounds. 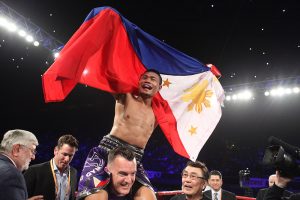 Edmund Villamor insists they see something in Ioka that they can exploit once more.

Nietes has lost just once in his career, a 2004 split decision to Angky Angkotta in Indonesia when Angkotta came in six pounds over the limit. Ioka is rated the no. 2 contender in the division by The Ring, while Nietes is rated no. 9.

A win could get Nietes back into the discussion with the top fighters at 115 pounds, while a loss could close that door forever.

Nietes remains as collected as ever.

“It’s an additional motivation for me but it will be never be a pressure. As long as I am doing my very best to get back the belt, then I am still a champion in my own ways,” said Nietes.