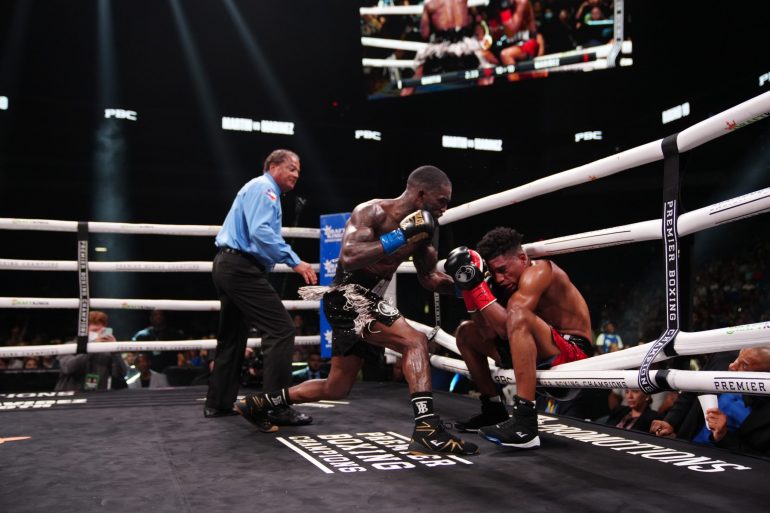 SAN ANTONIO — Frank Martin overcame a tricky challenge from Jackson Marinez to score a tenth round stoppage in their non-title lightweight bout at The Alamodome.

Martin (16-0, 12 knockouts) hurt the taller Marinez (19-3, 7 KOs) late in the ninth round with a counter left and right hook, dropping him just before the bell to end the penultimate round.

The Dallas-based Detroit native scored one more knockdown to begin the tenth round, forcing referee Rafael Ramos to stop the fight at the 30 second mark. Martin led 88-82 on two cards and 87-83 on the third at the time of knockout.

Marinez, 31, of Santo Domingo, Dominican Republic was a fight week replacement opponent for Ricardo Nunez, who was unable to make it to the fight due to visa issues.

The explosive finish put an exclamation mark on what had been the toughest challenge yet for the 5-year pro. Martin, a southpaw, established his jab early on, but the taller Marinez made life tougher for him in the middle rounds, catching Martin coming in with counter right hands and left hooks.

Martin knocks out Maríñez with a flurry of vicious punches in the 10th 😤🥊#MagsayoVargas pic.twitter.com/aYBjV5lROT

The fight began to turn in his favor in the seventh round, when he responded to the fiery words of head trainer Derrick James and forced a faster pace which Marinez was unable to match. The body punches Martin landed opened Marinez up to left hands and right hooks upstairs. The pace began to wear on Marinez, who was limited to throwing just one at a time by the eighth round.

The loss was the third straight for Marinez, who many felt got a bad break in his 2020 bout with Rolando Romero, losing a controversial unanimous decision. He returned the following year against former IBF lightweight titleholder Richard Commey, losing by sixth round knockout, and hadn’t fought in the 17 months since.

Martin, who picked up boxing at age 18, had a brief but successful amateur career, winning the 2016 National Golden Gloves with a decision over Vergil Ortiz Jr.

Martin is promoted by unified welterweight champion Errol Spence Jr., and says he’ll be ready to face the top fighters of the lightweight division in the near future.

“I’m right there with them guys. Sit me at the table with them,” said Martin.