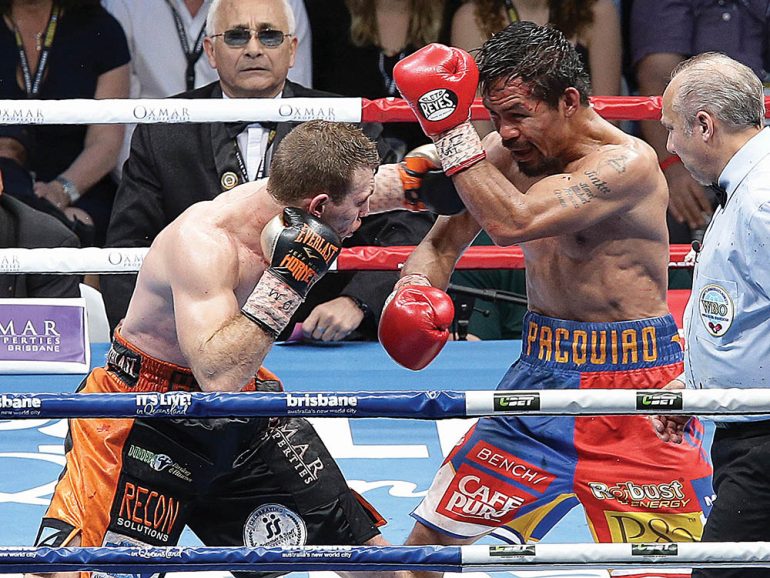 Horn (left) on the attack against Pacquiao. (AP Photo/Tertius Pickard)
02
Jul
by The Ring

This one certainly ruffled a few feathers.

On July 2, 2017, Jeff Horn scored a dream triumph over Manny Pacquiao, coming out the beneficiary of a 12-round unanimous decision to claim the WBO welterweight title at the Sun Corp Arena in Brisbane, Australia. Official scores were 117-111, 115-113 and 115-113.

Despite a lot of the fight being messy, Horn turned in a career-best performance that he would never come close to replicating again. In contrast, Pacquiao was way below par by his own exceptionally high standards and bared no resemblance to the pound for pound destroyer who annexed titles in a record eight weight classes.

Only once did we see a vintage version of Pac-Man, when he punished the Australian heavily in the ninth and came close to scoring a knockdown.

“I wasn’t really that hurt,” Horn insisted afterwards. “I was a little bit buzzed, but I recovered very quickly. I thought I was winning the fight at that stage. I thought I was coming forward more and landing the cleaner blows.”

The WBO would review the fight and uphold the decision. Despite the sanctioning organization’s intervention, this result remains one of the most controversial in modern boxing history.