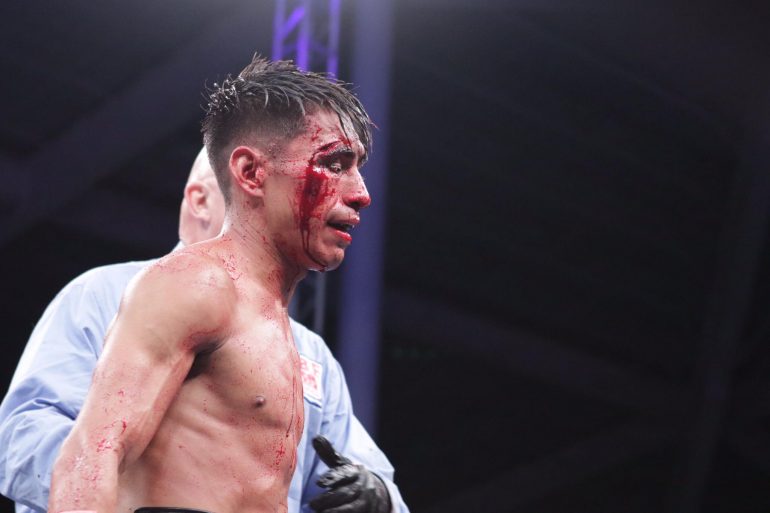 Daniel Valladares, seen with a bad cut in his 2020 challenge against Pedro Taduran, suffered a similar cut against Cuarto. Photo by Jhay Oh Otamias
01
Jul
by Ryan Songalia

Valladares, 28, used his reach and boxing skills to counterpunch the heavier handed Cuarto (20-3-2, 11 KOs) for much of the fight. Cuarto, 26, had most of his success with right hands, particularly when the two got into exchanges.

Valladares suffered the most consequential cut of the fight in round 4, the same round when his first attempt to win that same belt came to a close due to a cut against Pedro Taduran in 2020. There were several visits by the ringside physician throughout the fight to check on the cut above Valladares’ left eye.

Officiating came in to play in the later rounds as referee Wes Milton missed a clean knockdown scored by Cuarto in round 8 on a right cross. Loose tape was a frequent issue on Cuarto’s gloves, which led to a seemingly unprecedented point deduction for glove tape in round 10.

MP Promotions President Sean Gibbons, who represents Cuarto, says they will seek a rematch, taking exception with the missed knockdown call and the point deduction.

“We feel we absolutely won the fight. The referee had an off night. He’s usually a good referee but he made some bad calls,” said Gibbons.

“For the people who were not in the building, it was 110 degrees inside the building. The tape comes loose, how is that our fault when the conditions are so wacky?”

The fight was Cuarto’s second defense of the belt he won in February of 2021 with a unanimous decision over Pedro Taduran, and defended this past February with a technical decision in a rematch.

Valladares has now won four straight, having lost back to back decisions to unheralded fighters following the Taduran fight.