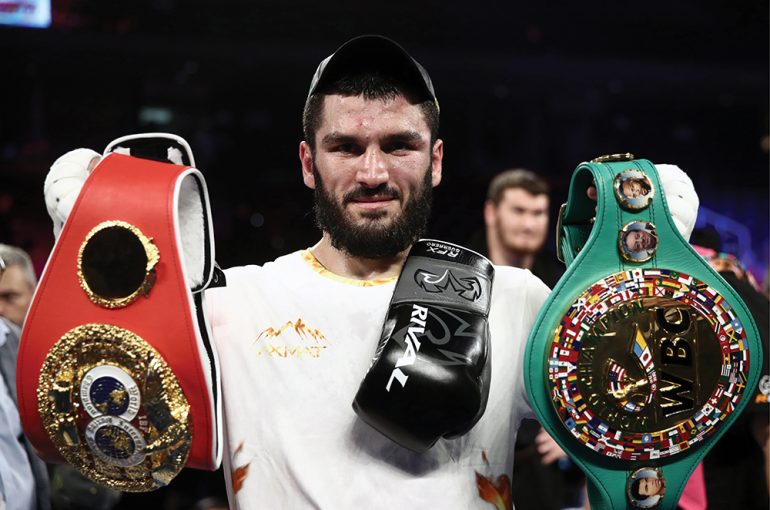 “Every fight for me is exciting,” said Artur Beterbiev, the WBC and IBF light-heavyweight champion. He meets WBO ruler Joe Smith at Madison Square Garden on Saturday and his all-action style has made Beterbiev one of the most-popular fighters in the world and many are hopeful of fireworks.

“Every fight in this position that I have is a challenge and I have to be prepared 100 per cent for every fight,” Beterbiev continued. “Joe Smith is good. He has good experience in the professionals and he’s had good fights against good opponents but we will see on January 19.”

A plethora of top boxing stars have been in action this year and debate has raged about who should be on mythical pound-for-pound lists. Beterbiev is in the conversation but he’s not getting obsessed with it. He is just sticking to the boxing and will leave the lists to others.

Beterbiev has been in camp with trainer Marc Ramsey and long-time assistant coach John Scully, the former light-heavyweight contender who was brought in as another pair of eyes to contribute technical advice from a different viewpoint.

Business in the light-heavyweight division has intensified since Canelo Alvarez started campaigning at 175lbs, but rather than the money and profile that would come with a Canelo fight, Beterbiev would rather have the glory of a unification clash with Dmitry Bivol (who has a WBA belt), Canelo’s recent conqueror.

“In the future… I think I’d more like a fight with a current champion who has the belt, not for name or money,” Artur went on. “For me, that’s a more important setting.”

Of course, away from boxing Russian forces have attacked Ukraine and Russian sportsmen and women have been banned from some competitions. Beterbiev, originally from Khasavyurt in Russia, said he has not been following the news since he has been in camp, opting to concentrate on the fight.

“I think of sport out of politics but it’s not good, sportsmen have an effect for that,” he stated. “I think it’s not good but I can’t change something like that. To be honest, I’m preparing for a fight, I don’t watch TV, I don’t watch YouTube, I’m preparing for a fight. It’s difficult to focus on what’s going on around the world and being ready to fight.”

That’s what the 37-year-old does best. The biggest win of his career was when he battered the excellent Oleksandr Gvozdyk to a 10th round defeat at the end of 2018 in Philadelphia. Gzozdyk had to go to hospital and never fought again.

“Very good fighter,” Beterbiev remembered, while admitting that he did contemplate the risks of being involved in boxing.

“Of course, it’s not good but it’s boxing and we choose this sport, we choose this way and it can happen to me or anyone but it’s part of professional sport,” he explained. “It’s hard.”

British eyes will be on what happens this weekend. Beterbiev already turned away the challenge of Callum Johnson in a thriller in 2016 but Anthony Yarde is expected to be ringside on Saturday and hopes to meet the winner later this year.

Beterbiev doesn’t know much about Yarde. “I’m not a fan of boxing,” he continued. “I don’t follow the different boxers even before I became a world champion, I didn’t follow boxers and being honest I never watched Yarde. I haven’t watched his fights and I don’t know him well, but when we have contact or a fight with Yarde we will watch him and check everything.”

The Russian says he makes weight comfortably still but doesn’t know how much longer he will be fighting for.

But the way he fights has endeared him to many in the sport. He’s often referred to as a beast for his hard-hitting, relentless nature. He disagrees, but does so with a modest smile.

“No, I am not beast,” he insisted. “I’m nice guy. Maybe people like that or think that but I’m a very simple boxer.”