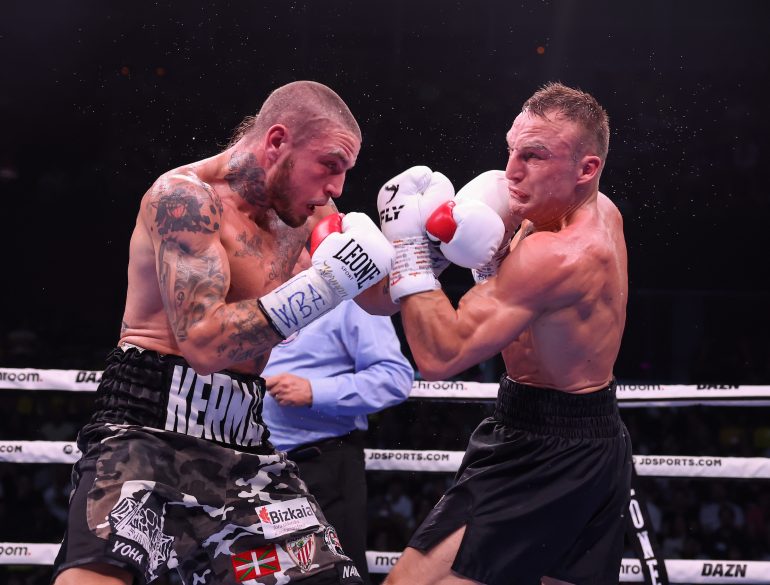 Kerman Lejarraga takes an uppercut from James Metcalf, on May 20, 2022 Photo by Ian Walton Matchroom Boxing
20
May
by Diego Morilla

Local hero Kerman Lejarraga became friends with England’s James Metcalf when the visiting fighter served as a sparring partner for him a few years ago.

That friendship was briefly suspended for 10 spirited rounds on Friday night, where Metcalf went to work hard and early and put on a strong workmanlike performance to score a unanimous decision win over his old friend in a junior middleweight bout that took place at the Bilbao Arena in Bilbao, Basque Country, Spain.

“I stuck to the plan and got the win,” said Metcalf after his win. “I believed I had won, that’s all that matters. I wasn’t nervous about the scorecards.

Metcalf had reasons to feel uneasy during the final reading of the scorecards. In the third round, a right hand by Metcalf landed slightly behind Lejarraga’s left ear and dropped the local fighter, but referee Manuel Oliver Palomo oddly decided to not call it a knockdown. There were no other knockdowns.

The fight featured plenty of clean exchanges in the mid-range, with Metcalf appearing to do most of the hard work while Lejarraga tried to land the most telling punches without much luck. Punch selection and placement was Lejarraga’s strength, landing from various angles while Metcalf based his attack on a steady stream of 1-2s to the head.

Cuts and bruises began to appear as early as the fifth round of the scheduled 10-rounder, and they became a factor as the bout progressed. A deep cut under Metcalf’s right eye made his work difficult in the final stretch of the fight, as did a similar cut under Lejarraga’s right eye as well.

In the co-main event of the night, Jairo Noriega soundly defeated veteran Angel Moreno over 12 rounds and grabbed the EBU European flyweight belt in the process.

Moreno was dropped at the very end of the first round with a short and powerful right cross, and was spun around by a similar punch in the 5th round before visiting the canvas again. On and on, Moreno continued trying against a younger and stronger Noriega who simply wasn’t about to let go. A unanimous decision rewarded the 29-year old Noriega, while the 38-year-old Moreno, a former world title challenger (a loss against Charlie Edwards in 2019) came up short in what has to be one of the last waltzes in his long professional career. Moreno slips to to 21-5-3 (6 KO) while Noriega improves to 12-0 (3 KO).

Earlier on, Jon Miguez improved to 17-0 (8 KOs) with a demolishing stoppage of England’s James Moorcroft with one minute left in the sixth episode. The fight was a tough and entertaining affair for the first half of the scheduled eighth-rounder, until Miguez surged and started carving Moorcroft’s body with murderous punches to the midsection. Moorcroft went down after taking a left hook to the body at the end of a long barrage of punches that had him hurt throughout the sixth round. Even though he did manage to beat the count, referee Jon Luna decided he had seen enough. Moorcroft returns home with a 16-2 (5 KOs).

In the opening bout of the DAZN broadcast, Fran Mendoza had his hands full with Alexander Mejia in a thoroughly entertaining bantamweight bout that featured non-stop action from bell to bell. The 80-72 (twice) and 78-74 scorecards in favor of Colombia’s Mendoza failed to reflect his Nicaraguan foe’s excellent work rate and body punching. Mendoza improved to 14-0 (7 KO) While Mejia jumps the pond back to his Central American home with a 18-3 (7 KO) ledger.

Earlier in the night, southpaw Rhiannon Dixon scored an almost shutout over Moroccan/Italian Mahjouba Oubtil over six rounds in a women’s lightweight contest. Dixon improved to 5-0 while Oubtil dipped to 4-1 (1 KO). And earlier on, Dominican Republic transplant Saul Luna ruined the evening for the vocal local crowd when he ended local hero Rikar Urrutia’s unbeaten streak with a six-round majority decision win in a junior welterweight contest. Luna improves to 7-2 with 1 KO while Urrutia goes home with a 5-1 resume. 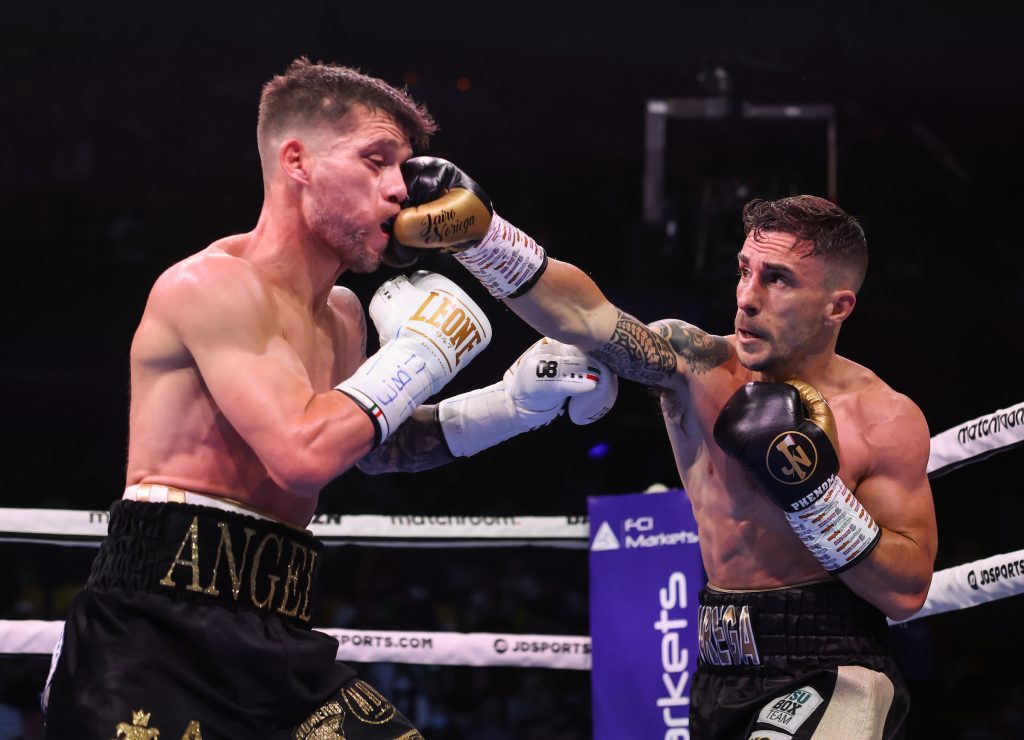 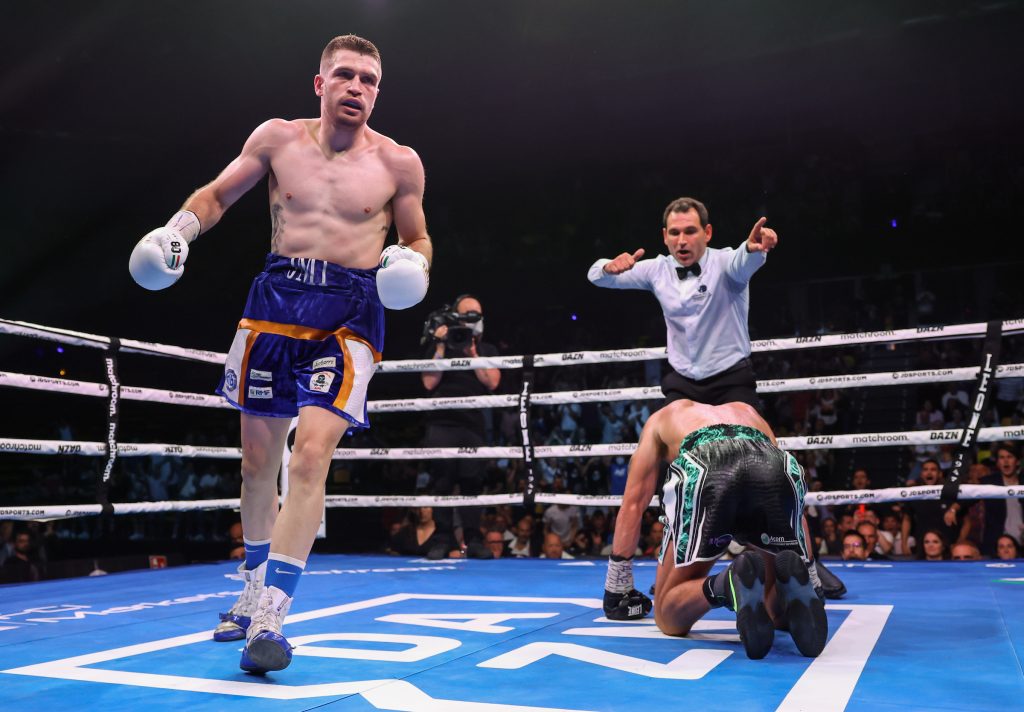 Jon Miguez sends James Moorcroft to the canvas during their welterweight contest on May 20, 2022- Photo by Ian Walton Matchroom Boxing 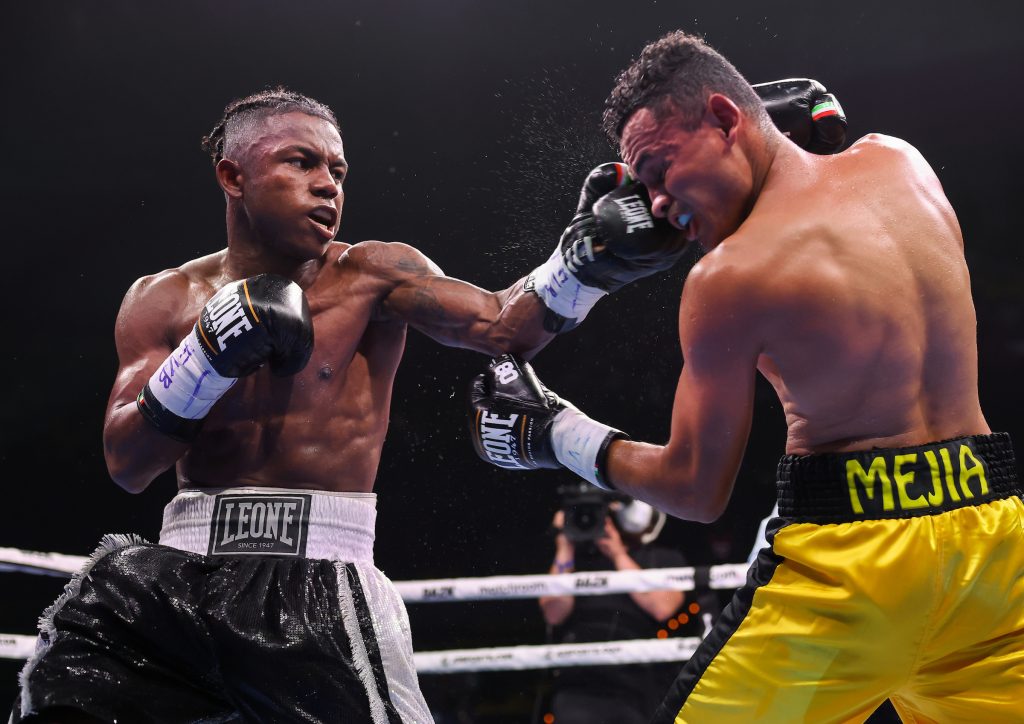 Colombia’s Frann Mendoza lands a left on Alexander Mejia during their bantamweight contest on May 20, 2022- Photo by Ian Walton Matchroom Boxing 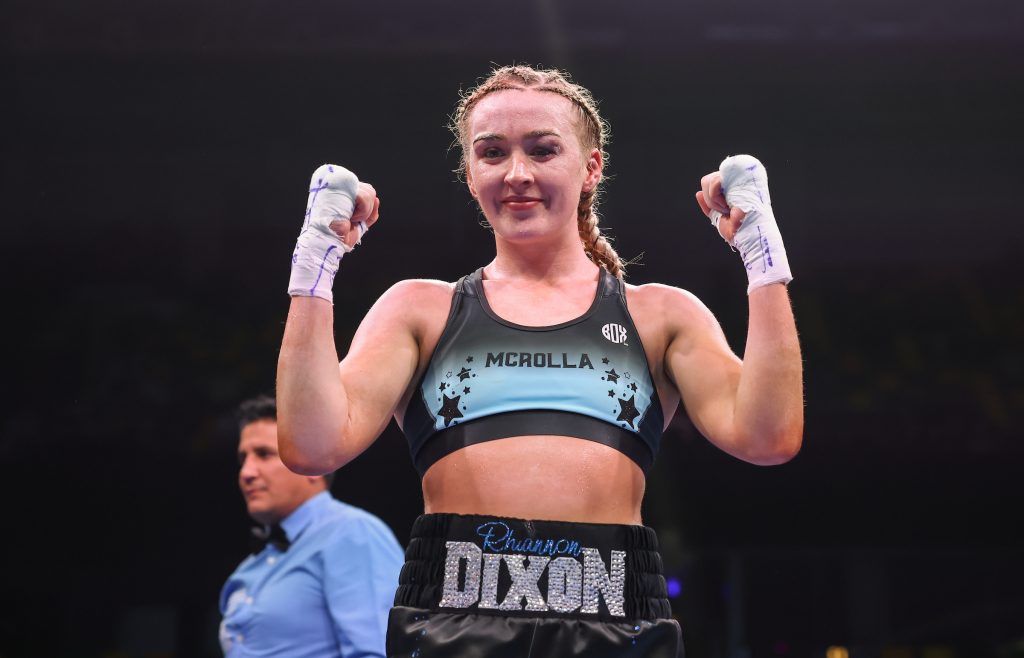 Rhiannon Dixon wins her 5th pro bout against Mahjouba Oubtil in a lightweight contest on May 20, 2022- Photo by Ian Walton Matchroom Boxing