David Lemieux: I’m training very hard to make sure I bring the surprise 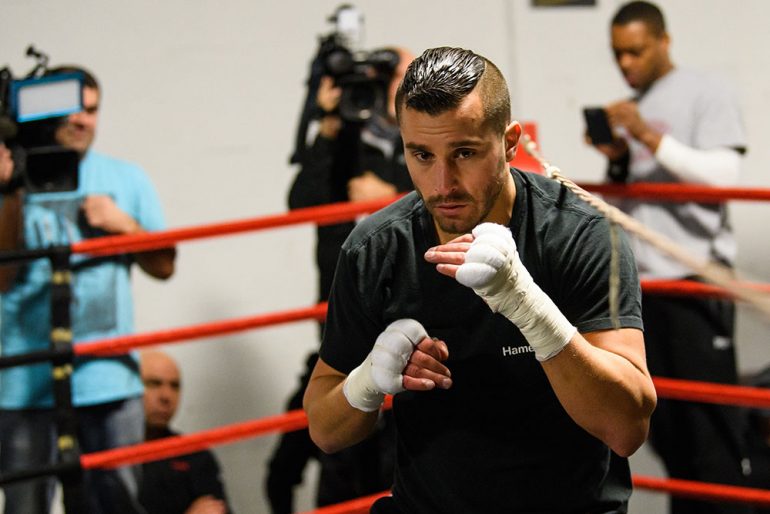 Lemieux, who is rated No. 6 by The Ring at 168-pounds, is unconcerned about facing Benavidez in his home state.

“It’s not the first time and maybe not the last time,” Lemieux (43-4, 36 knockouts) told The Ring. “I went in there with Gabriel Rosado. I walked into the Barclay Center; people were booing me. People were behind Gabriel Rosado but when I walked out, I had a standing ovation.

The 33-year-old is expecting to have to walk through fire when he steps in the ring with the physically strong Benavidez.

“I’m expecting him to be at (former opponent Gennadiy) Golovkin’s level,” he said when asked how good Benavidez is. “Just a little different style of fighting and different maturity.

“Benavidez is a great fighter. He comes to fight, I love that. I like his style of fighting, he’s an exciting fighter. He’s not going backwards; I’m not going backwards. He’s a good boxer, I’m a good boxer. he has power, I have power. I believe I have more power than him and I’m going to prove that on fight night. I think he’s still young in the game, he still has things to learn. I’m not that old but I’ve been in the game for a while. I know when fighters look ahead of fights, they can get surprised.”

Lemieux surrendered his IBF 160-pound title to Golovkin (TKO 8) on an Autumn evening at Madison Square Garden in 2015, but feels he has improved from the loss.

“I’ve changed a lot over the years since I fought Golovkin, I was 27-years-old,” he said. “I’ve matured and I’ve got more experience. His style of fighting is not Golovkin’s style of fighting but he’s a pretty good fighter. I’m really excited to go in there and trade with him and see what he’s got. I think it’s going to be an exciting fight for the fans.”

Lemieux welcomes his 8/1 underdog role, heading into the fight.

“Sometimes I read the comments and people are falling asleep (on me),” he said. “I’m training very hard to make sure I bring the surprise.

Theoretically with the WBC Interim title on the line the winner would move closer to a potential fight with boxing superstar Canelo Alvarez, who may be looking at returning to 168-pounds after suffering a surprise defeat against Dmitry Bivol up at light heavyweight earlier this month.

Although Lemieux has long craved that fight, he’s not putting all his eggs in one basket.

“Canelo doesn’t care about David Lemieux. If there’s no titles, he’s fighting big names, much respect to him,” said Lemieux. “After I get this title, I’ll be more credible. That man makes the decisions on his own. I’m not chasing anybody. This fight (with Benavidez) will open a lot of doors.”

Benavidez turned professional as a 16-year-old in 2013. His all-action style caught the eye as he moved through the ranks. At just 20, he became the youngest ever super middleweight titleholder when he edged past Ronald Gavril (SD 12) for the vacant WBC title.

The youngster learned from the experience, however, and posted a wide unanimous decision in a direct rematch. Problems arose outside the ring when the now 25-year-old was busted for cocaine use and stripped of his title. He returned to action and looked impressive in regaining the belt from Anthony Dirrell (TKO 9).

Weight issues kiboshed his second title reign. Benavidez has since won three fights against middling opposition while looking to regain the WBC title.

Benavidez-Lemieux, plus full supporting undercard, will be broadcast on Showtime, beginning at 10:00 p.m. ET/ 7:00 p.m. PT.