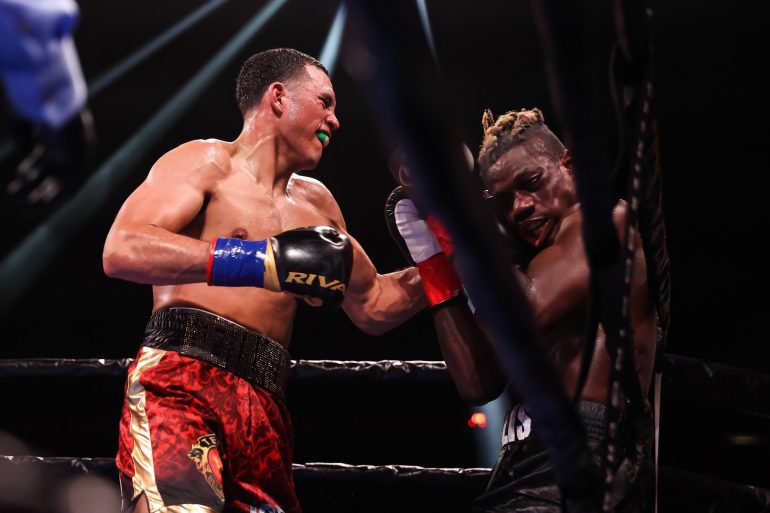 Benavidez, who is ranked No. 1 by The Ring at 168 pounds, welcomes what is expected to be an action-packed encounter.

“He has a lot of power but I feel there’s a lot of holes in his game. There’s a lot of things I can take advantage of. He’s a strong fighter but I’m a naturally a 168 pounder and could be fighting at 175. I’m the stronger fighter but he’s a good fighter and I have a lot of respect for him, that’s why I’ve prepared so well for him.”

Although the 25-year-old has always displayed a good chin, he appreciates it would be foolhardy to test that notion against someone with Lemieux’s firepower.

“Every fight is a danger, that’s why you do the training camp – to be prepared,” he said. “You work on a lot of different things and you make a game plan for every fighter because one wrong shot could change a fight.

“Every fighter I’ve fought, I use my jab and range and my game plan is I keep my distance, I use my jab, I set him up, throw combinations and go to the body. I can’t go in there, chin out, getting hit with every punch. The game is called hit and don’t get hit so I’m definitely going to try not to get hit as much as possible and inflict as much damage as possible. I feel I’m the bigger puncher. I’m going to be cautious but still be me. We know it’s going to be a great fight and may the best man win.”

Benavidez, who will be fighting in his home state for the second consecutive time, welcomes the attention he gets by fighting at home.

“I never feel like there’s any added pressure,” he said. “I’m really focused on what I’ve got to do. I know when to push everybody away and how to handle the crowd. If anything, I feel fighting in front of a big crowd helps me because it motivates me a little more, I feed off the energy of the fans. I’m here to give the fans great fights.”

Although Canelo Alvarez recently lost, Benavidez would still like to face the undisputed super middleweight champion, but insists he has other options.

“I don’t think he’s too eager to fight me,” said Benavidez. “He’s saying he’s chasing greatness and looking for other titles. My job is, is to be here and after I win this [WBC] Interim title, I’ll be No. 1 for the [WBC] world title. If he doesn’t want to fight me, he should vacate the belts. My main goal is to win the world championships, I don’t care who has them.

“There’s a lot of great fights to be made on PBC. There’s Jermall Charlo, Caleb Plant, David Morrell, maybe there’s Edgar Berlanga, Daniel Jacobs, possibly. I take it one fight at a time, it really doesn’t matter who I fight. My job is to train hard, be ready for whoever.”

Lemieux has been a professional for 15-years. He won his first 25 fights in exciting fashion before suffering back-to-back defeats against the experienced Marco Antonio Rubio (TKO 7) and former junior middleweight titlist Joachim Alcine (MD 12) in 2011.

To his credit, the Canadian regained his form and stopped Gabe Rosado (TKO 10) and claimed the vacant IBF middleweight title by beating Hassan N’dam N’Jikam (UD 12). Lemieux lost his title when he attempted to unify with then-WBA boss Gennadiy Golovkin (TKO 8).

His vaunted power was very much in evidence against Curtis Stevens (KO 3) and Gary O’Sullivan (KO 1). Those wins bookended a one-sided loss to then WBO middleweight beltholder Billy Joe Saunders (UD 12). The 33-year-old has won his last five and boasts an impressive record of 43-4 (36 KOs).

Benavidez-Lemieux, plus full supporting undercard, will be broadcast on Showtime, beginning at 10:00 p.m. ET/ 7:00 p.m. PT.