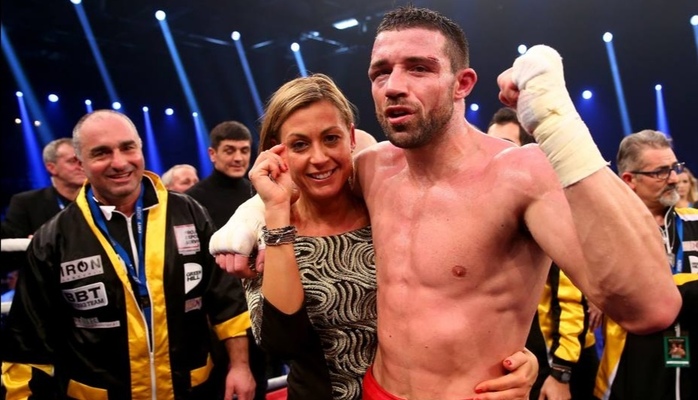 In Italy’s boxing event of the year, veteran Giovanni De Carolis 30-10-1 (14) scored a dramatic fifth round stoppage of a brave but outgunned Daniele Scardina.

De Carolis, 37, was the underdog but he started quickly in the opening two rounds and fended off a mini-revival by the 30-year-old and previously unbeaten Scardina, who is now 20-1 (16).

“I’m very happy, grateful and pleased for all the people who came here to support me,” said the winner, in front of 6,000 fans in Milan’s Allianz Cloud.

De Carolis landed almost all of the heavy work in the first two rounds, laughed off a Scardina right hand in the second session but scored with two big left hooks of his own afterwards.

Scardina worked downstairs more in the third and he was physically imposing in the fourth, pushing the older man back.

With less than 30 seconds left in the round, though, Scardina was stiffened by a terrific right hand out of almost nowhere. The veteran ploughed in, connecting with three big hooks and flattening Scardina.

The young contender made it back to his feet but his senses had left building.

The referee gave Scardina every chance to beat the count and he was seemingly saved by the bell. Scardina wasn’t sure what was going on, whether the fight was over or what planet he was on, but it was allowed to resume and Scardina had a minute’s respite in the corner.

When Scardina came out, he was a sitting duck. De Carolis picked up from where he left off and powered through what was left of Scardina’s defenses, forcing the stoppage after 10 seconds of the fifth round.

“Age is just a number,” said De Carolis. “I knew that Daniele was going to work my body but I had a lot of sparring and tried my best to defend my body.”