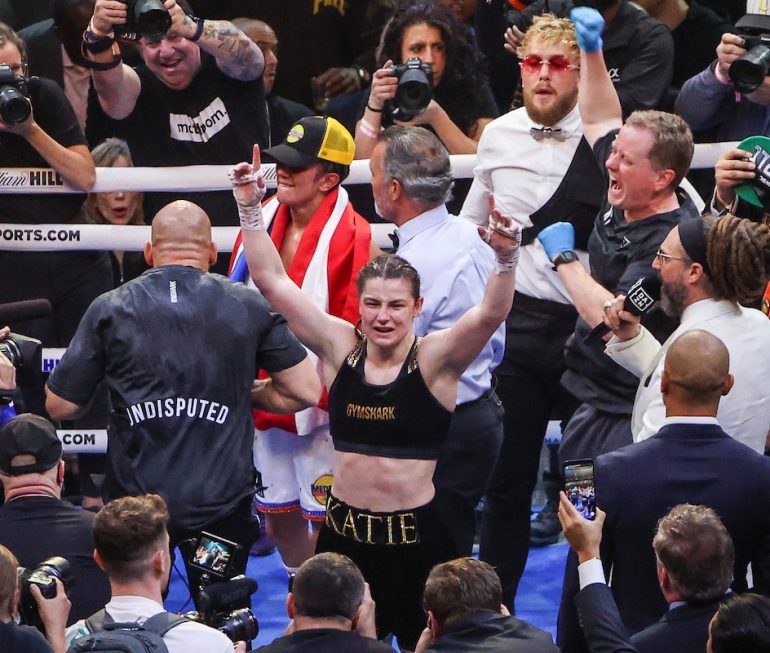 New York, NY — Katie Taylor did it like she usually does—with grit. She was rocked and in trouble more than a few times Saturday night before a sellout crowd of 19,187 at Madison Square Garden in the much-anticipated women’s lightweight war with Amanda Serrano.

In the end, Taylor’s extra grit, mixed in with some strategic smarts, won out.

Taylor (21-0, 6 knockouts) remained The Ring/WBC/WBO/IBF/WBA undisputed lightweight world champion with a 10-round split-decision victory over the stubborn, courageous Serrano (42-2-1, 30 KOs).

Basically, it was bombs away.

“What you witnessed was what I believe was one of the greatest fights in Madison Square Garden,” Matchroom head Eddie Hearn said. “Both women deserve so much credit. I think now, tonight is the night we stop talking about women’s and men’s boxing and we talk about just boxing, because that was one of the best fights I ever witnessed live.”

A key was how Taylor closed. Serrano was up 57-56 on Cavalleri’s card after six, and 59-55 on Roussel’s. Feldman had it even 57-57 after six. Taylor won the last four rounds on Cavalleri and Feldman’s cards, and the last three on Roussel’s.

The Serrano game plan was lure Taylor into the pocket and force her into a back alley fight.

“That really was (the plan), she kind of folds under pressure and that’s what we were trying to do,” Serrano said. “I wanted her to feel my power.”

It was Serrano who struck first with an attack to the body, and with :40 left in the first, tagged Taylor with a left to her upper body. Serrano played the role of stalker, coming forward and forcing Taylor to back up.

Serrano appeared very relaxed, very in control, even when Taylor popped her with a right on the head in the opening minute of the second. Serrano carefully stayed on Taylor’s left, forcing her to come long with the right.

The opening two rounds were tactical, when just inside a minute left in the third, Serrano drilled Taylor with a combination against the ropes. The two ended the third with shooting shots at each other, although nothing substantial connected.

But the third was Taylor’s best round, to that point. She countered Serrano well and kept landing straight rights.

Taylor carried the tactic to the fourth, landing straight rights and side stepping Serrano each time she closed.

Sensing the fight might be slipping form her, Serrano found another gear in the fourth. She starched Taylor from the opening bell of the round, until the end. The crowd was going so crazy no one could hear each other inches away. A Serrano straight left and straight right cause Taylor’s nose to bleed. Taylor was even rocked a few times.

Serrano kept the pressure on in the fifth. She backed Taylor up, using the straight left. Taylor wouldn’t bend. It’s probably the most one-round punishment Taylor ever took in her career. She fought back, but Serrano seemed to have too much firepower for Taylor to stay very long in the pocket.

“I wasn’t as hurt as people may think,” Taylor said. “I wasn’t worried. I knew (the fifth) was a tough, tough round. I knew that was Amanda’s round but I knew I was okay; I knew I was stable coming back to the corner. I just had to regroup and reset and I actually won the next round.” 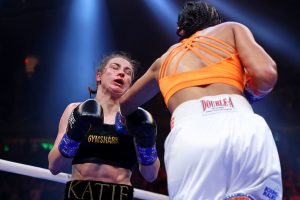 Katie Taylor took some shots from Amanda Serrano during their bout at Madison Square Garden (Photo by Ed Mulholland/Matchroom).

By the seventh, Serrano had Taylor backing up again. She used the straight left, but sunk a few lefts and rights to the body.

The sway of the fight seemed to favor Serrano, when Taylor turned it back around by tagging Serrano and then getting out of harm’s way. The eighth was Taylor’s best round since the first half of the fight.

In the ninth, Taylor again boxed, landing a few shots, and trying not to stay in front of Serrano. Taylor appeared stronger in the ninth, making Serrano miss horribly.

As the 10th opened, it seemed to be anyone’s fight. The fighters themselves sensed that. Taylor for one of the rare times in the fight engaged Serrano and came at her, tearing a cut on Serrano’s right eye.

“Katie Taylor is a tough fighter, she’s a natural 135-pounder and I was coming up from 126,” Serrano said. “I went up two divisions to fight Katie Taylor. Once again, she’s a strong fighter, she’s a warrior, she’s Irish, and I mean she was able to withstand the power and come back.”

The two threw hell at each other in the closing seconds, causing the sellout crowd to erupt for a Fight of the Year candidate—male or female.

Minutes afterwards, there was immediate talk of a rematch.

No one objected—after everyone regained their hearing.

“We could have it in Croke Park in front of 90,000 people in Dublin (Ireland),” Taylor said. “That would be unbelievable. Absolutely, that could happen.”