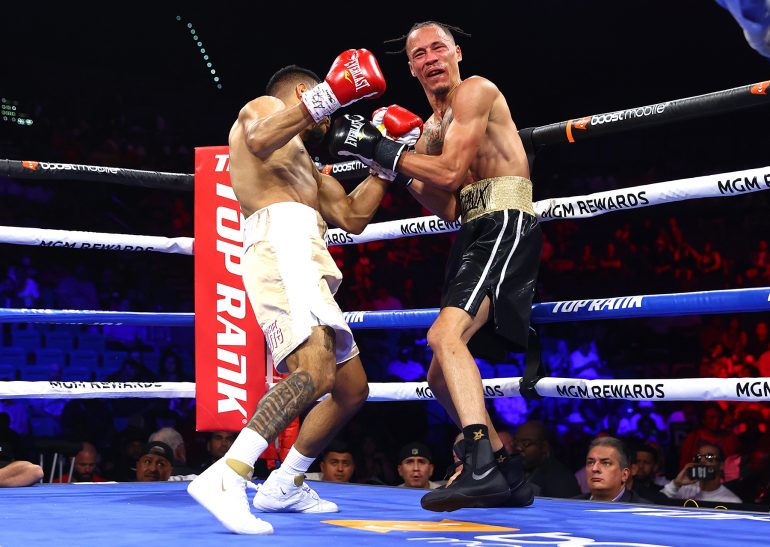 LAS VEGAS – Raymond Muratalla is making a name for himself at 135 pounds.

The unbeaten prospect, who resides in Fontana, California, battered Jeremy Hill, before knocking him out in the third round, improving to 14-0 (12 knockouts).

Muratalla has now stopped his last nine opponents. He has benefitted from sparring contenders and world titleholders at the Robert Garcia Boxing Academy in nearby Riverside.

From the opening bell, Muratalla was the aggressor, ripping combinations that landed on Hill’s face. Muratalla would score a knockdown during the opening round, landing a straight right hand to the head. Hill did not completely go down as his glove barely touched the canvas after attempting to stay on his feet. He continued to fight on as the action resumed.

Hill was game, but anytime he would initiate an exchange, Muratalla countered with one or two punches to the head, which caused his face to bruise and produced blood from his nose.

Muratalla continued his assault on Hill, breaking him down every moment of the fight. A combination to the head dropped Hill to the canvas. Referee Tony Weeks began administering a standing eight-count, but decided to wave the fight off at 2:27 of the third round.

Cortes (17-0, 10 KOs) had the partisan crowd in his favor and seemed to feed off the energy as he landed an array of punches on Del Bosque. Undaunted, Del Bosque remained in the pocket with Cortes, even stunning Cortes in round 3 with a counter to the head.

During round 4, Cortes backed Del Bosque against the ropes, landing a left hook to the body that dropped Del Bosque to one knee. Del Bosque was still game, remaining in the pocket, but Cortes’ punches were taking their toll. Early in round 6, Cortes landed a three-punch combination to the head, dropping Del Bosque to the canvas. Del Bosque attempted to beat the count, but referee Celestino Ruiz waved the fight off at 43 seconds after Del Bosque’s corner threw in the towel.

Isley (5-0, 3 KOs), who resides in Alexandria, Virginia, dropped Hannah with a barrage of punches midway through the second round. Hannah beat the count, but was dropped again by a right hand to the stomach. Hannah’s corner threw in the towel, prompting referee Robert Hoyle to stop the fight at 2:32.

Lightweight prospect Abdullah Mason of Cleveland improved to 2-0 (2 KOs) by stopping Argentina’s Luciano Ramos (1-3) at 2:32 of the opening round.

Both Isley and Mason are co-promoted by Top Rank and Antonio Leonard.