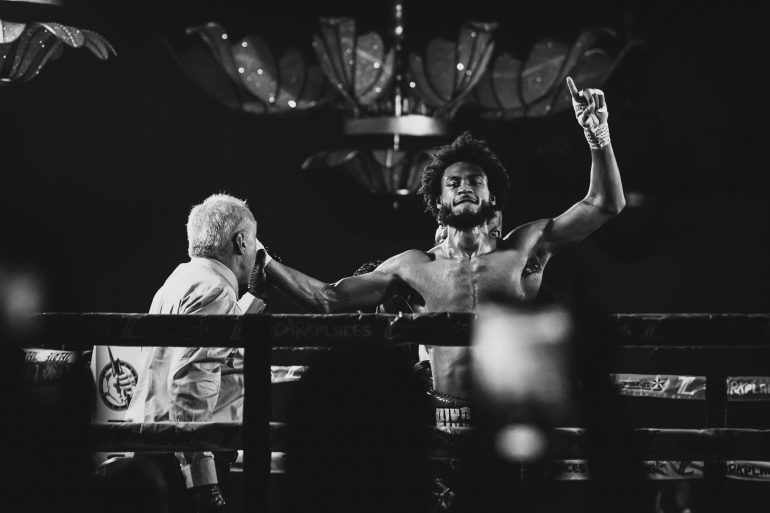 The 25-year-old boxing prospect from Teaneck, N.J. works days as a kindergarten teacher at KIPP SPARK Academy in Newark, N.J. After clocking out, he’ll jump on the treadmill at the school’s gymnasium to clock in his miles before heading out to Warriors Boxing to work on his craft with trainer Dwyke Flemming.

For Cope, it’s all worth it to pursue his dream of making it in professional boxing.

“You do the things you need to do to do the things you want to do. If I had an even busier job, I would make time for boxing because boxing is what I love,” said Cope, a teacher for three years who previously taught students with autism.

The junior welterweight prospect will have his second pro outing on Saturday, facing Ryan Schwartzberg (1-4-1, 1 KO) at The Terrace at Biagio in Paramus, N.J. The fight will be part of a 7-fight card promoted by debut promoter Scott Abella.

Cope’s boxing journey began at age 15. Other kids saw his skinny frame and figured he’d be an easy target, resulting in a number of fights.

Cope sharpened his boxing skills at the Bergen County PAL, the same gym where his own father had trained a generation earlier. He had approximately 60 amateur fights, culminating in three Diamond Gloves titles and a 141-pound novice N.J. Golden Gloves title.

Cope turned pro last November, stopping Shannon Hawkins in the first round. He says he doesn’t know what to expect from his next opponent, who has been stopped three times, but says he’ll find out soon enough.

“He’s a decent fighter. I really don’t know how it’s gonna be until I get in the ring with him. We’ll see. I’m excited to see what he brings to the table and what he’s gonna bring out of me on Saturday night,” said Cope.

Cope is self-managed, but says he likes doing business that way. He doesn’t anticipate seeking out a deal to work with a bigger promoter or manager until he is ready to go to the next level. He expects to be back in the ring again in late July or early August.

Abella believes Cope has the ability to go to that next level.

“Jamir’s a tough kid, he’s tall, he’s got the package,” said Abella, who also boxed out of the Bergen County PAL.

Cope is working on his own future, while finding fulfillment in shaping the futures of the students he teaches. He says his students see him as the “fun teacher,” and have been a big support to him in his boxing career.

“The most beautiful thing about being a teacher is that kids are the future. You’re able to shape the kids minds at such a young age,” said Cope.

Other fights on the card include Nicky “The Bull” Vitone (6-1-1, 6 KOs) of Pine Brook, N.J. against Llewelyn McClamy (3-1-1, 1 KO) in a six-round junior welterweight bout. Vitone, 25, trains out of Aces Boxing Club in Boonton, N.J. under trainer Joe Zabry.