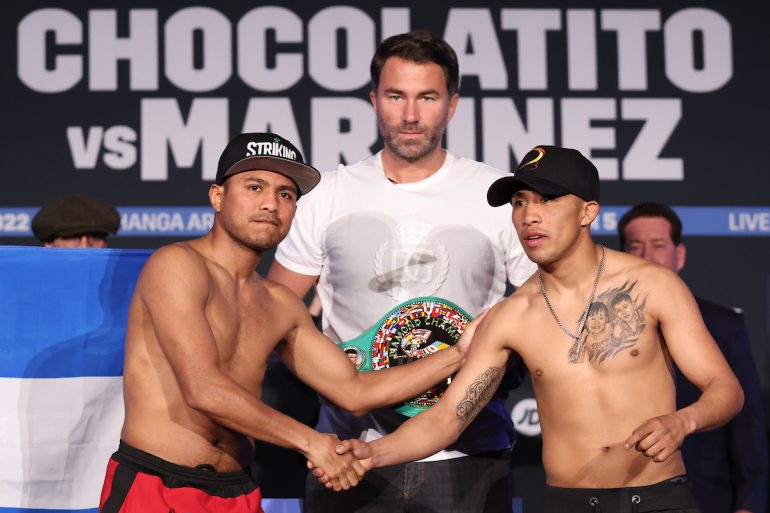 Roman Gonzalez and Julio Cesar Martinez pose after weighing in for their March 5, 2022 fight at the Pechanga Arena in San Diego. Photo by Ed Mulholland/Matchroom
04
Mar
by Francisco Salazar 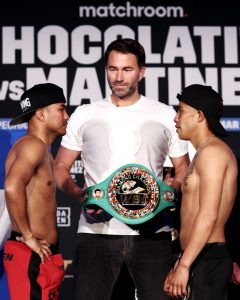 Chocolatito and Martinez are ready to get it on in San Diego. Photo / @DAZNBoxing

There were tense moments leading up to and immediately following the official weigh-in, which took place hours earlier. Gonzalez (50-3, 41 knockouts) easily made weight, but Martinez, the WBC flyweight titleholder, weighed 117 pounds, two pounds above the junior bantamweight limit.

Click here for the story of Martinez missing weight.

Martinez (18-1, 14 KOs), who resides in Mexico City, was given two hours by the California State Athletic Commission to lose the excess weight. The two camps eventually agreed after Martinez was only able to drop down to 116.4 pounds.

Gonzalez, who resides in Managua, Nicaragua, last fought on March 13 of last year, losing a close split-decision to Juan Francisco Estrada. The 34-year-old is ranked No. 2 by The Ring at 115 pounds. 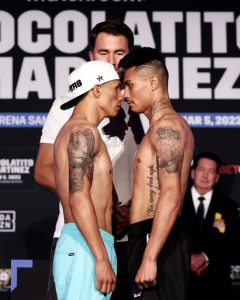 Mauricio Lara and Emilio Sanchez had the most intense staredown of the media weigh-in. Photo / @DAZNBoxing

Both fighters weighed in at the contracted weight of 126 pounds.

In the opening bout of the main portion of the Matchroom Boxing USA card, junior middleweight Souleymane Cissokho will face Mexico’s Roberto Valenzuela (19-2, 19 KOs) in a 10-round bout.

Cissokho (14-0, 9 KOs), who is originally from Senegal and now resides in Bagnolet, France, weighed in at 153.8 pounds. Valenzuela weighed 154 pounds.