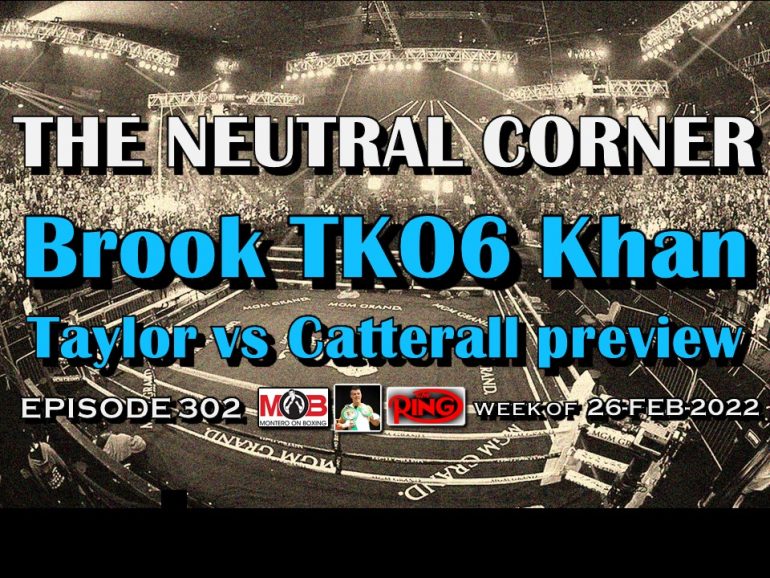 On episode 302 of The Neutral Corner boxing podcast, host Michael Montero discussed a torn biceps injury suffered in training by Brian Castaño. The injury forced Castaño’s rematch with Jermell Charlo, originally scheduled for March 19, to be postponed. The bout will now likely take place in June.

The Chelsea at the Cosmopolitan of Las Vegas, Nevada

“If Khan and Brook do not retire, they are both going to get messed up,” said Brian. “They need to stop fighting and enjoy the rest of their lives.”

“I think Kell Brook vs Danny Garcia at 154-pounds would be very competitive,” said Nacho. “They’re both at the same place in their careers.”

“Khan vs Brook was quite an event,” said Rich from the UK. “And not all in a good way. It was probably the worst undercard I’ve ever seen. They literally pulled Frazer Clarke’s opponent from the audience.”

“Regarding the “Canelo Sweepstakes”, nobody should be calling Canelo a ducker,” said Rich Lopez. “Whether he fights Bivol and Golovkin, or Charlo and Benavidez, those are all bad-ass fights!”

“I’m glad that I did not buy the Khan vs Brook PPV,” said Nigel from the UK. “Having heard about the poor undercard and Frazer Clarke’s fight. I’m a fan of Clarke though; I think he’ll be a great addition to the heavyweight division.”

“I might be sadistic, but give me Keith Thurman vs Kell Brook,” said CJ Duncan. “The loser retires. Put it on Fox. The fight would probably get eyeballs and you could do it as a PPV in the UK.”