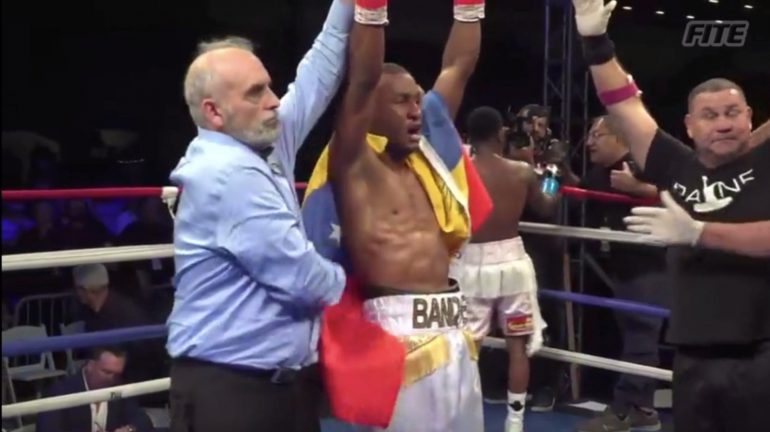 Banquez, who is originally from Caracas, Venezuela, and now resides in Fort Lauderdale, Florida, improves to 20-1, 14 knockouts.

Despite having significantly fewer pro fights than Banquez and having fought eight rounds once in his pro career, Argilagos was the significant favorite. However Banquez came to fight. From the opening bell, Banquez was the aggressor, throwing and landing a high volume of punches. Banquez continued putting Argilagos on the defensive, forcing him to work off the ropes.

Argilagos attempted to be more assertive in Round 3 but Banquez’s higher work rate made it difficult for him to find any rhythm or consistent offense. With each passing round, Argilagos absorbed punishment and his punch output dropped significantly.

After the conclusion of Round 6, Argilagos’ corner advised referee Frank Santore Jr. to stop the fight.

The 31-year-old Banquez had not fought since July 2019, defeating then-unbeaten Prince Patel by unanimous decision. Banquez has now won his last six fights since losing to fringe contender Miguel Gonzalez in June 2018.

Argilagos, who is originally from Camaguey, Cuba, and now resides in Houston, Texas, drops to 8-1, 4 KOs.

Martinez dropped Velazquez hard in Round 2 but Velazquez was able to get back to his feet. Moments later, Velazquez dropped Martinez to the canvas. Martinez was beat the count and fought back until the bell sounded to end the round.

Both fighters went at it in the pocket in Round 3, providing great exchanges. The action picked up in Round 4, in which Velazquez hurt Martinez.

Both fighters continued to pummel one another until Velazquez’s punches began taking their toll. Velazquez eventually forced referee Frank Gentile to step in and stop the fight at 2:44.

Perez is originally from Camaguey, Cuba, and now resides in Mexico City. He is managed by Aldo Mir.

Heavyweight Richard Aguero, of Miami, was successful in his professional debut, stopping Draper, Utah’s Brandon Grundy (0-2) in Round 2.

The card was promoted by Leon Margules’ Warriors Boxing.