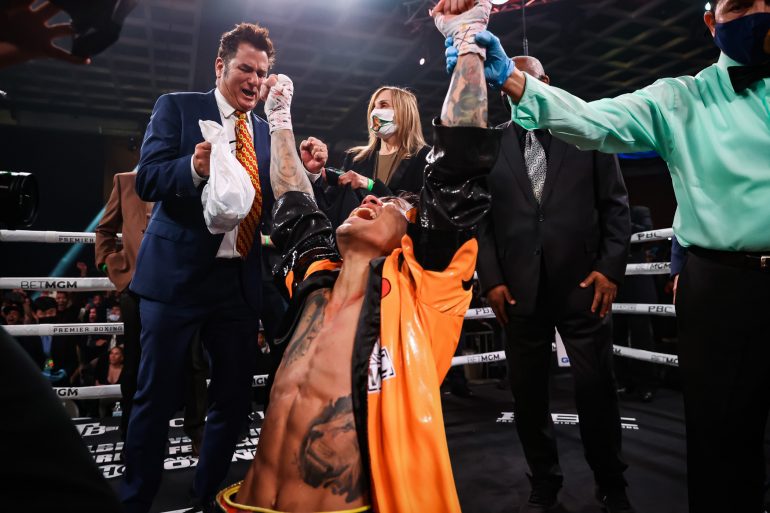 NORTH BERGEN, N.J. — Mark Magsayo walked into a packed gym on Monday, about 48 hours after his world title win, and saw a sight that reminded him of his own beginnings.

“They’re the same like when I started at 8 years old,” said the new WBC featherweight titleholder Magsayo before giving an inspirational speech to the kids class at State of Fitness Boxing Club in North Bergen, N.J.

Magsayo (24-0, 16 knockouts) is riding high after pulling off a massive upset, defeating Gary Russell Jr. on Saturday night in Atlantic City, N.J. Odds were as wide as 4-1 against Magsayo, 26, being the one to end the longest reign in boxing. Magsayo emerged with the majority decision victory, becoming the fifth current world titleholder from the Philippines.

“I feel like I’m in heaven. This is my dream, the green belt. All fighters, this is their dream,” said Magsayo, of Tagbilaran City, Philippines.

Magsayo shared his story of overcoming difficulty, how he picked up boxing as a child after watching Manny Pacquiao dominate Marco Antonio Barrera in their first fight back in 2003, and how he worked selling ice cream in the streets of Bohol province. His family survived by making $5 per day from working long hours in a bakery.

He started boxing to supplement the family’s income, earning $3 per amateur bout, but lost his first three amateur bouts, and his father advised him to quit.

He bought his father his own bakery in Tagbilaran City with the purse from his previous fight, a come-from-behind knockout of Julio Ceja in August, and will buy his father a home with the money earned from his championship win.

Magsayo had few battle scars, some light bruising under his right eye, but few blows could match the difficulties he had faced in recent years. His championship win provided a boost of inspiration to the young amateurs at the gym, but the most difficult battles were outside of the ring, leaving scars that the eye couldn’t see.

Tensions had already begun building with ALA Promotions, the Philippine-based company Magsayo turned pro with in 2013, as early as 2017, when the company began publicly dismissing Magsayo’s calls for a title opportunity. He left the promotion in 2018, after opting not to renew his contract, but ALA, which closed in 2020 after 35 years in operation, claimed he was still under contract, which scared away potential suitors.

Magsayo’s wife, Frances, a tattoo artist by trade, became a licensed manager to handle his career, since no professionals would touch his career. Frances, the Adrian to Mark’s Rocky, says the couple went into debt, and exhausted their savings trying to keep the dream alive.

“We both almost gave up. We almost split up,” said Frances Magsayo.

“It was like a rollercoaster. For years we’ve been through hell and back, and then hell again. But we never gave up. I said every day that I’m gonna just keep pushing Mark because I believe in him, that he can become a champion. He just trained every day and I just took care of the problems outside the ring.” 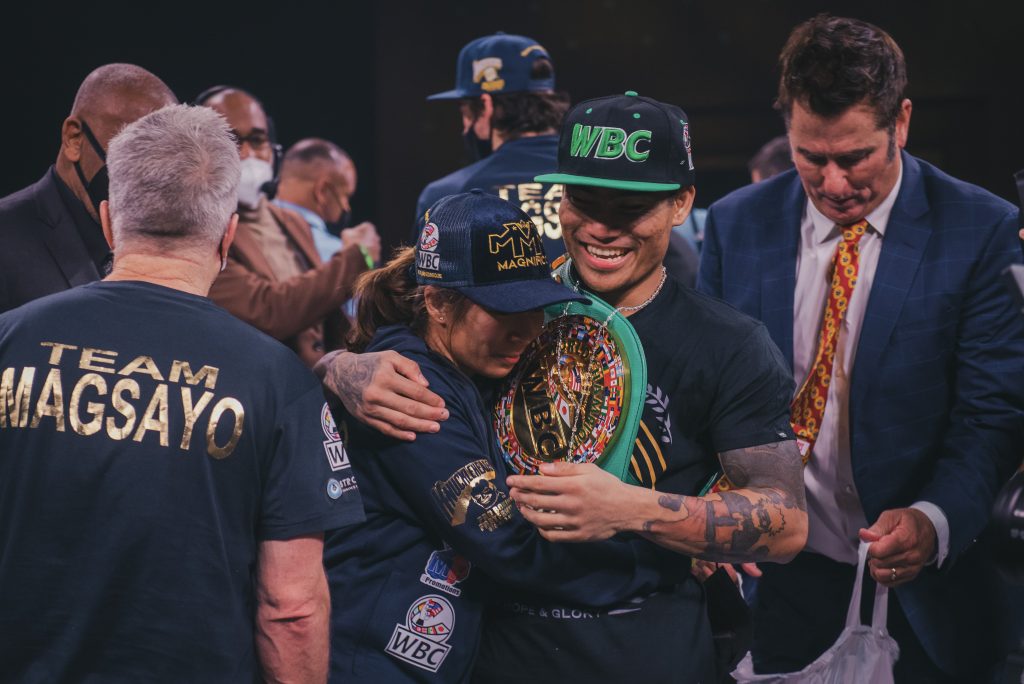 The couple relocated from Cebu to Rizal province, near the Philippine capital region of Metro Manila, and began training at a gym owned by Cucuy Elorde, daughter of the great boxing champion Gabriel “Flash” Elorde. Magsayo trained six days a week for two years, working with Rissan Muelas to keep his skills sharp.

Magsayo eventually returned to the ring in April of 2019 after signing with Malaysian manager Vikram Sivapragasam and a promotional company that was headed by Joe Dunkin, the brother of boxing manager Cameron Dunkin. Sivapragasam helped Magsayo get to America, where he began training in Las Vegas.

Magsayo knocked out Erick Deztroyer in Singapore, and then returned to Bohol province for a fight with former bantamweight titleholder Panya Uthok in August of 2019, which Magsayo won by unanimous decision. Magsayo would later part amicably with Sivapragasam, and buy out the remainder of their contract Dunkin, and sat out of the ring for over a year once more.

The couple took a chance once more, walking in to the Wild Card Boxing Club in Los Angeles in July of 2020, hoping to meet with Freddie Roach, whom Magsayo had long dreamt of training with. Roach, who had guided Manny Pacquiao to a Hall of Fame career, was interested in working with another talented Filipino boxer.

“Freddie’s first words were, ‘When do you want to start?’ Mark said, ‘I want to start tomorrow,’” recalls Frances Magsayo.

Roach doesn’t like to compare anyone to Pacquiao, but says there is one way that he and Magsayo are similar.

“He has a lot of heart, he listens well in the gym, he trains hard. Like Manny Pacquiao, he’s a hard worker. The only reason Manny won eight world titles is because of his work ethic. His work ethic got him all the way there, and Mark is the same way,” said Roach.

Shortly after beginning training at the Wild Card, the Magsayos received a phone call from Sean Gibbons, President of MP Promotions, the company led by Pacquiao. They worked out a promotional deal, with the plan being for Magsayo to fight three times, with the third bout being an elimination bout, and the fourth being a world title fight. Gibbons, who has been involved in boxing for decades, said he’d never seen a plan work out so perfectly.

“It shows perseverance, it shows he has no quit in him,” said Gibbons. “He doesn’t let things break him mentally, and that’s a great trait.”

That’s not to say there weren’t real challenges. Magsayo’s first bout under the deal, which afforded him exposure on Premier Boxing Champions cards, was originally scheduled to be against Jose Haro, but Haro withdrew. He was replaced on two weeks’ notice by Rigoberto Hermosillo, a tall, aggressive southpaw with a very different style from that which Magsayo had prepared for.

Magsayo was only able to spar twice with a southpaw to prepare due to the late switch. Magsayo later tested positive for COVID-19, though he was asymptomatic. For ten days he trained alone in an Airbnb. There was no equipment, so he’d run the stairs to build his conditioning. Frances Magsayo said they begged PBC officials to allow them to fight after he tested negative on subsequent tests, and the fight continued on after they relented.
Magsayo emptied the clip against Hermosillo, stunning him in round one, but was unable to sustain the pace over the ten round distance.

A winded Magsayo escaped with a split decision win, but the performance drew more criticism than praise.

“People tried to bash Mark, trying to bring him down. But nobody else knows what it took to even make that fight happen,” said Frances Magsayo. “Mark cried, but Sean lifted him up again.” 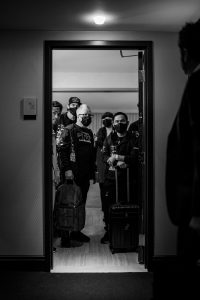 The Magsayo team prepares to leave the hotel room for the fight. Photo by Arvee Eco

Magsayo returned to the ring in April of 2021 with a dominant fourth round stoppage of Pablo Cruz in a fight that wasn’t televised before facing Ceja, in the co-featured bout underneath what would be Pacquiao’s final fight.

Magsayo once again started fast with a first round knockdown but faded, as the rugged Mexican puncher targeted Magsayo’s body and dropped him in the fifth. After losing eight straight rounds, and being behind hopelessly on the scorecards, Magsayo ended the fight in dramatic fashion, landing two right hands in round ten that put Ceja’s lights out for several minutes.

Even the championship win wasn’t the end of the road for Magsayo’s criticism. Detractors credited Russell’s inactivity, and a right shoulder injury that Russell says he had dealt with since the amateurs, for the result. Russell sought to discredit Magsayo’s performance even further, claiming he deserved the win by margins of 10 rounds to 2 or 9 rounds to 3.

“The problem is, if we gave him a rematch, I don’t know what year it would take place, He only fights every one or two years,” joked Gibbons of Russell.

Along the way, the Magsayos built a team that could get them to the top. In addition to Roach, Magsayo also trained with Roach’s protege, Marvin Somodio, a former amateur star from the Philippines turned trainer. He added on nutritionist Jeaneth Aro after the Hermosillo fight to assist in maintaining his strength while he cuts down to featherweight from his walk-around weight, which is above 150 pounds. Aro had worked with IBF junior bantamweight titleholder Jerwin Ancajas and the Philippines’ national basketball team, but rose to new acclaim through her work with the Philippines’ four Olympic medalists at the 2020 Games, including the country’s first ever gold medalist, Hidilyn Diaz.

Rounding out the training team is conditioning coach Pedro Garcia, who formatted a regimen that focused less on weight lifting and more on building functional strength and endurance, and Ash Parker, who works to improve Magsayo’s hand-eye coordination and reaction times.

Magsayo returned to Los Angeles on Wednesday and will begin plotting steps for his next defense. Despite being the mandatory challenger for Russell, Magsayo won’t get the luxury of a voluntary defense. The WBC sent the Magsayo team a letter just days after winning the belt, informing them that they’d have to face the no. 1 contender, former WBC junior bantamweight titleholder Rey Vargas (35-0, 22 KOs).

Vargas had been out of the ring for over two years due to a severe hand injury, and returned to the ring in November of 2021, but wasn’t ready to face Russell two months later. Gibbons said he would have preferred Magsayo to face bigger names with more fan-friendly styles, like WBA titleholder Leo Santa Cruz, or the winner between IBF titleholder Kiko Martinez and Josh Warrington. Magsayo says he hopes to get an exception for a voluntary fight instead with Santa Cruz, the biggest name in the 126-pound division.

“When we jumped ahead of Rey Vargas, we did so knowing that we would have to face him as a mandatory,” said Gibbons, who expects the fight to take place in the summer.

Vargas, a busy, awkward fighter, is a difficult test for Magsayo in the ring, but few challenges can match what he has faced out of the ring.

“To my family, to my team, I’m so happy that my dream came true,” said Magsayo.