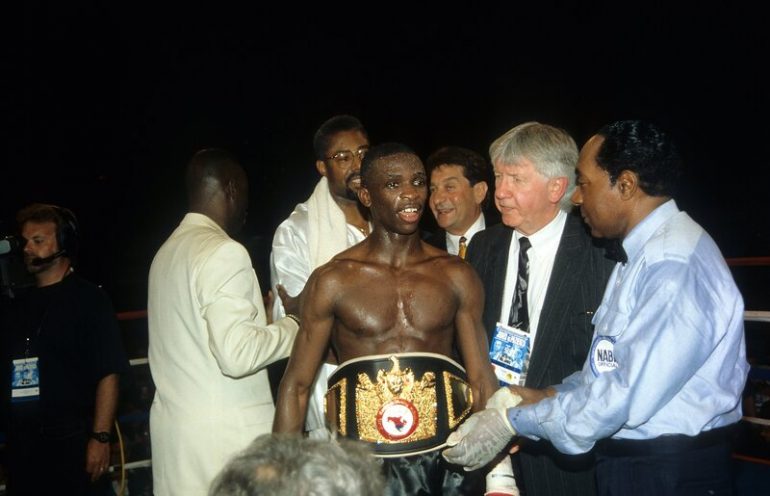 Throughout Derrick Gainer’s career he was largely known as Roy Jones Jr.’s little buddy. However, he was more than that, he was an excellent fighter in his own right, who went on to hold the WBA featherweight title in the early 2000s.

Gainer was born in Pensacola, Florida, the youngest of three children, on August 22, 1972.

“I grew up in the projects, called Pensacola Village,” Gainer told The Ring. “That is where I had my upbringing and where I learned to fight. It was most definitely one of the toughest parts of Pensacola.

“My mom was a nurse and she took very good care of me and my sisters. My dad didn’t play a role in my upbringing, for whatever reason. Years later, I talked with him and we have a decent relationship.”

When Gainer was 11-years-old his cousin persuaded him to visit the local gym. 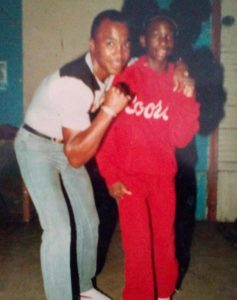 “My cousin saw Roy in the newspaper, he had just won the 1984 Junior Olympic nationals,” Gainer recalled. “He took me there and introduced me to Roy and the guys and he was like, ‘You should box.’ he boxed for a little while and he stopped and I stuck with it.”

Gainer and Jones Jr. instantly hit it off and formed a strong bond that would last through their respective career’s.

“The chemistry we had was phenomenal,” he said. “I read him well, he read me well. It became a point where we were together every single day.”

However, a disagreement with Roy Jones Sr. saw Gainer drift away from the sport. Without boxing to focus his attention, Gainer’s life lacked direction.

“I wasn’t doing anything productive,” he admitted. “I was running the streets, not taking advantage of my talent.”

Jones Jr. eventually convinced his friend to return to boxing. Gainer, who went 6-3 as an amateur, turned professional as a string bean 17-year-old flyweight in July 1990.

After two wins he lost a six-round split decision against the much heavier Scott Phillips. The Floridian resident reeled of 10 consecutive wins until he lost back-to-back fights in 1994.

“I believe a loss can be a win, if you learn from it.” he said

And he did, rebounding to beat grizzled veteran Harold Warren for the NABF 126-pound title in June 1995.

“That was one of the best performances of my career,” he said. “I had a great training camp and put everything together that night. He was tough, he hit me with some good shots, he took great punches.”

“I made this deal with Fred Levin, who was our promoter, that whenever I beat a world champion or become a world champion that he would buy me any car I wanted after the fight,” he recalled.

“I went to the Lexus dealership before the fight, I gave them a check and said hold the check after the fight [the promoter’s] going to send you another one. I took the car with me to Jacksonville. Roy looked at me and said, ‘What the hell are you doing?’ I said, ‘Man, I’ve got this.’ I had one of the worst attitudes of a fighter.”

The fight was a rollercoaster back and forth multiple knockdown encounter that ultimately Gainer lost.

“This is the most humbling thing that ever happened to me,” he said. “I had to then take the car back to the dealership and say, ‘Sir, I can’t get this car.’ and the dealership was said, ‘Sir, don’t worry about it. We saw the fight, we understand.’ they took the car back. That moment I will never forget.”

That lit a fire under Gainer, who stopped six consecutive opponents, all inside the distance, while chasing the rematch with Kelley.

“I sat ringside and after every Kevin Kelley fight was over, I stood up and pointed at him.” said Gainer.

Finally, Gainer was able to entice Kelley into a rematch in July 1998.

“I dominated him from Round 1 to Round 10,” he said proudly. “It was one of the greatest moments in my boxing career simply because of what happened in ’96. It wasn’t as exciting as the first fight but I did a number on him.”

The next target was to win a world title and he won nine more fights, including a rematch win over Warren (UD 12) and a shutout decision over savvy veteran Freddy Cruz (UD 10) before landing his first title opportunity.

After dropping back down to featherweight, he was quickly matched with WBA beltholder Freddie Norwood in September 2000.

“He was powerful,” recalled Gainer. “He never hurt me with any shots, I was too big. I felt his power on my arms and knew I did not want to get hit by him clean because I felt he could have hurt me. I dominated him.

“I did not get the car, I never got the car, even when I beat Norwood [Laughs.]” 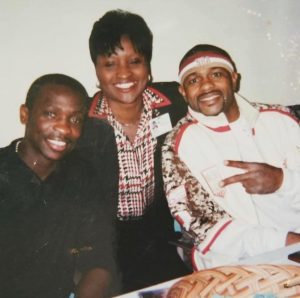 Derrick Gainer (left) owes a great deal of his inspiration to be a fighter to fellow Pensacola native Roy Jones Jr. (right)

In November 2003, Gainer met IBF titleholder Juan Manuel Marquez in a unification matchup. The Mexican had things well in hand when an accidental headbutt saw the fight end in a technical decision after seven rounds.

“Marquez was one fight I wish I could get back,” he said. “He had good speed and his movements were on point. He never overcommitted to his punches which is what I was waiting for. When he lost to Norwood, he would sometimes rush and step in and telegraph (his punches), but against me he never really did. I should have taken more risks to make him fight more.”

In one final world title attempt, Gainer traveled to Jakarta, Indonesia to fight WBA titleholder Chris John in April 2005. Gainer dropped the defending titleholder in the opening round but lost a 12-round unanimous decision.

Gainer fought sporadically over the next two years before an extended three-year hiatus. He fought once more in 2012.

“Boxing at one point wasn’t No. 1 in my life,” explained Gainer (43-7-1, 25 knockouts). “I was running a charter school, I owned a UPS store, I ran different companies. I didn’t like the training aspect. Me and Roy didn’t train together. The love I had for the game basically went away.”

Gainer, now 49, still lives in Pensacola, he is married and has eight children. For the past three years he has worked a day job as a salesman for Pepsi.

Kevin Kelley: It was kind of hard to tell when his jab was coming all the way out. A lot of times he did a feint jab so when he would throw his real jab, it would land on me.

Juan Manuel Marquez: A lot of the Mexican fighters appear to be aggressive fighters who come forward. Marquez was completely different; he had a posture like he was coming forward, but he would never commit to his punches. I couldn’t really land on him because he wasn’t showing me anything, so all of my shots missed him by a wider margin than most of the other guys I faced.

Kelley: I remember the first time he dropped me; it was just a matter of him throwing a quick left hand down the middle. His hand speed was by far the fastest of any guy I fought.

Kelley: Kevin Kelly was smart…damn yeah Marquez was smart too. It’s a toss-up on that one. It appeared Marquez did not want to get hit by my left hand and he did things to [avoid and counteract]. Kevin wanted me to throw my left hand so he could counter my left hand, Marquez wanted to counter it but most definitely not get hit by it. I think Kevin, he had a really good I.Q and was the smartest guy I faced.

Diego Corrales: Chico was so strong, he dropped me with a shot that wasn’t really that solid. There was a difference in body mass. He was so much bigger and so strong. He was massive. It was like man versus child. By far Chico Corrales was the strongest guy.

Corrales: He was devastating to me. When he hit me with something on my arm, it hurt like hell. Chico is the only person who I was hit by and I was like, ‘Damn, I got hit.’

Marquez: He could fight inside and outside; he was the complete package.

Marquez: Marquez was the best fighter I faced. He most definitely was the real deal.