The Neutral Corner: Episode 296 – First show of 2022, Smith vs Geffrard preview and more 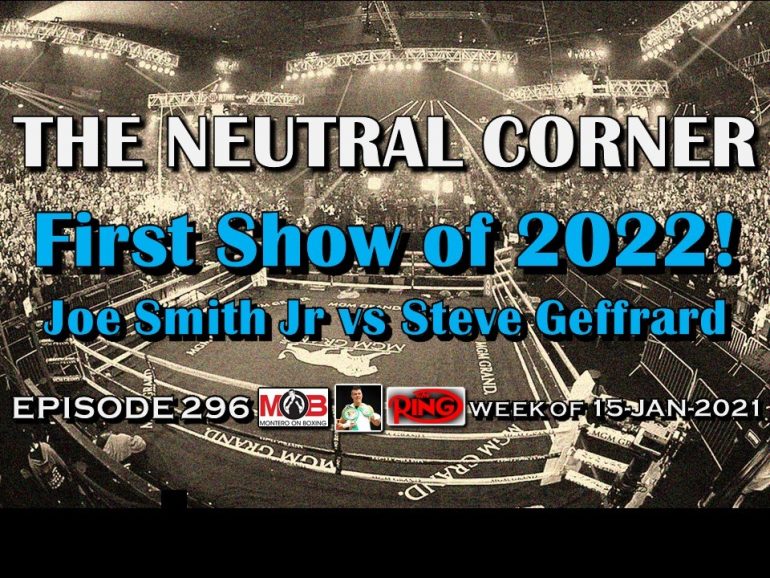 On episode 296 of The Neutral Corner boxing podcast, host Michael Montero returned from a break over the holidays to catch up on all the latest news in the boxing world. He also talked about an opportunity for fight fans to save on official Kronk Boxing gear.

TNC listeners can go to the Kronk site (EMBED à  www.kronksports.com) and use the promo code “Montero” for a 10% discount.

In other news, the Ramirez vs Pedraza fight has been moved to Friday, March 4 in Fresno, California, a day before Juan Francisco Estrada and Roman Gonzalez will fight their rubber match in San Diego.

PBC kicked off 2022 with a Fox PPV card on New Year’s Day. In the main event, Luis Ortiz survived two knockdowns to stop Charles Martin in the sixth round of their heavyweight bout. In the non-PPV prelims that aired on Fox, American lightweight prospect Frank Martin improved to 15-0 (11 knockouts) with a TKO4 win over Romero Duno.

“Man that Golovkin vs Murata fight would’ve been great right before New Year’s,” said Thad. “But I have to say, regarding the Ortiz vs Martin card on New Year’s Day, it was great to see boxing on a holiday. It’s a great time to watch boxing. Promoters should get on the holiday bandwagon.”

“I hear that the Spence vs Ugas fight is almost done,” said Mike. I can see Ugas being a very high-risk opponent for Spence, coming off the eye injury. I still favor him by late stoppage, but Ugas is very game. If Ugas does win, it would derail the Spence vs Crawford train.”