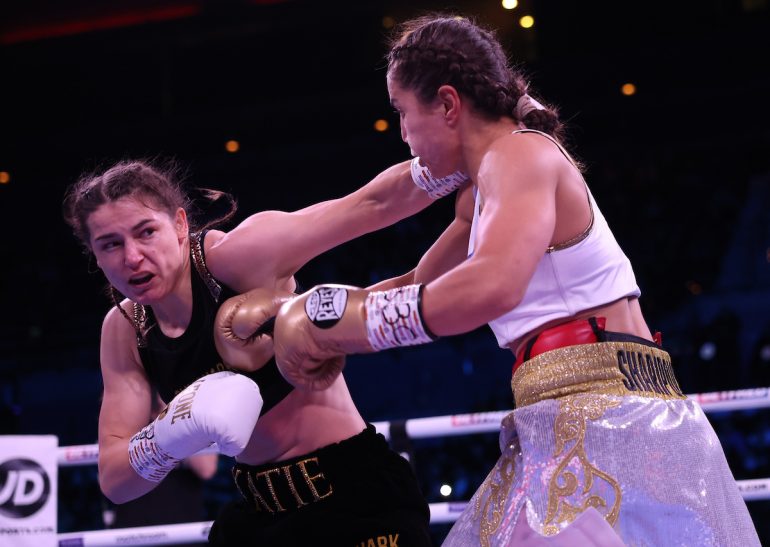 Pound for pound queen Katie Taylor retained her undisputed lightweight crown with a hard-fought 10-round unanimous decision win over Kazakhstan’s Firuza Sharipova at the Echo Arena in Liverpool, England, on Saturday. The official scores were 98-92, 97-92 and 96-93.

Taylor, who has held The Ring Magazine championship since June 2019, was far from vintage in this title defense but did more than enough to win the fight and set up much bigger game next year.

“Everyone thought it was an easy fight but we were well aware of the challenge,” said Taylor (20-0, 6 KOs) in her post-fight interview with DAZN. “She was scrappy inside, holding inside and it was hard to get off.

“Overall, it was my 20th fight, my 20th win, still undisputed, still undefeated, so I cant complain. We were prepared for whatever came my way tonight.”

The action was tight early with both fighters matching each other’s long range strikes and punching with the free hand during clinches. Some of the work up-close was messy and that suited the physically imposing challenger.

In the fifth, Sharipova was distracted by some damage around the left eye, sustained during a clash of heads, and was nailed with a sharp right by the Irish star. The visitor was able to match Taylor’s work rate at this point but Taylor was unquestionably the sharper fighter.

A point deduction for hitting Taylor on the break did little to help Sharipova’s caused on the scorecards and the champion began to pull away.

Both women traded some ferocious blows in the closing seconds and the crowd responded favorably.

The plan for Team Taylor in early 2022 would appear to be a lucrative and long-awaited title defense against fellow pound-for-pound entrant Amanda Serrano. The 33-year-old from Puerto Rico is scheduled to face former Taylor victim Miriam Gutierrez next Saturday.

“The plan is Amanda Serrano at Madison Square Garden, that’s the biggest fight in women’s boxing,” said Matchroom boss Eddie Hearn. “[Discussions have begun], they’ve got the contract, if Serrano wins next week I’m almost certain you see that fight in April.”

Sharipova, who lost for the first time since her pro debut in May 2016, drops to 14-2 (8 KOs) but her stock has risen following an excellent performance. 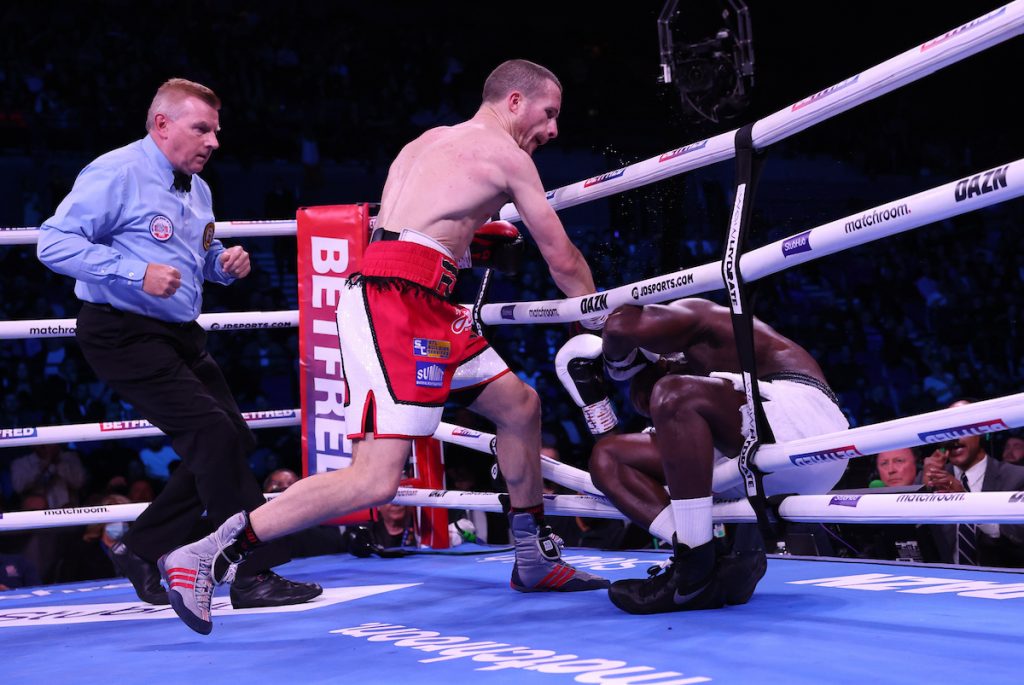 Davies stunned his opponent with a heavy counter right near the end of the first round and the writing was on the wall. Lundy appeared to have regrouped in the second but caught a well-placed left hook to the body and a follow-up right put him through the ropes and on to the ring apron. The American’s equilibrium was shot and referee Marcus McDonnell waved the bout over.

Talented Welshman Joe Cordina extended his unbeaten record to 14-0 (8 KOs) with a 10-round unanimous decision win over Belgium’s Miko Khatchatryan. The official scores were 100-90, 98-92 and 98-92