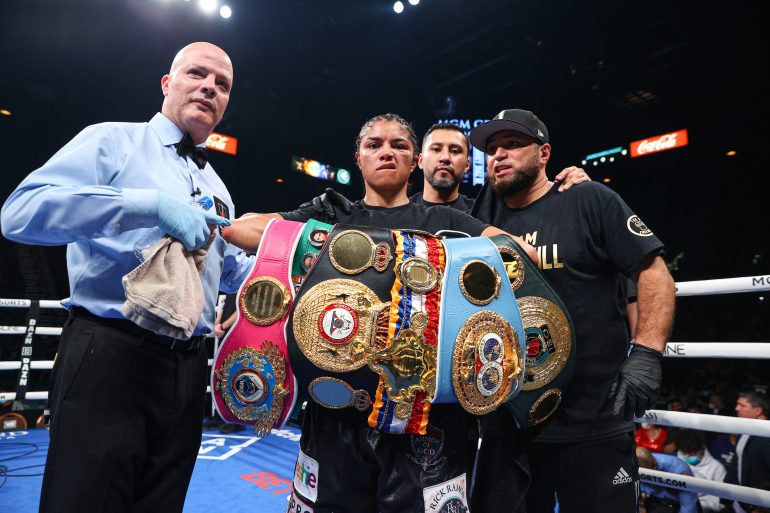 Jessica McCaskill celebrates her win over Kandi Wyatt during their December 4, 2021 bout at the MGM Grand Garden Arena in Las Vegas. Photo by Ed Mulholland/Matchroom
04
Dec
by Ryan O'Hara

After a long training camp ended with her original opponent unable to secure a travel visa, Jessica McCaskill refused to fight down to the level of her opposition.

Wyatt, who had lost her two prior bouts and accepted an offer to face McCaskill on barely one week’s notice, was dominated from the onset before referee Celestino Ruiz halted the fight with 19 seconds remaining on the ticket in round seven of their DAZN-streamed bout Saturday evening at MGM Grand Garden Arena in Las Vegas.

The bout took place on the undercard of the 12-round main event featuring unbeaten Devin Haney defending his WBC welterweight title for the fourth time against ex-130-pound titleholder Jo Jo Diaz. 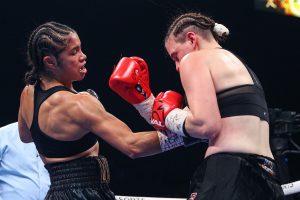 The 37-year-old McCaskill, a former junior welterweight champion, crushed Wyatt from the get-go with a series of heavy right hands that snapped her head back.

In round three, it was more of the same as McCaskill rocked her again with an overhand right and a left hook.

“I said [to Wyatt], ‘You’re tough as balls.’ She kept coming with good punches, too. It wasn’t like a ‘just charge you’ kind of a thing. She was throwing punches, just like I said she would,” she stated after the fight.

McCaskill kicked off round five with a plethora of body shots. Wyatt managed to withstand the attack but offered nothing back on offense. The onslaught continued in round six as McCaskill mangled Wyatt with a crisp right uppercut.

A series of one-two combinations in the seventh frame resulted in Ruiz stepping in to stop the fight and to protect Wyatt (10-4, 3 KOs) for her own good.