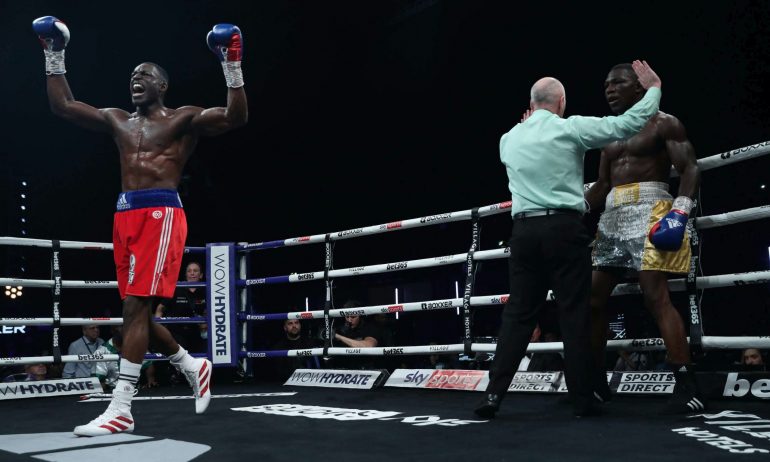 London cruiserweight Richard Riakporhe improved to 13-0 with a strong fifth-round stoppage of veteran Olanrewaju Durodola at the Wembley Arena.

Seconds in to round five, the Kansas City-based Nigerian unravelled from a left hook and even though he rose from the knockdown, Riakporhe piled in behind both hands, picking a stunning right uppercut. Durodola was coming under heavy pressure before referee Victor Loughlin intervened.

Thirty-six seconds of the fifth round had elapsed but it had been all Riakporhe up to that point.

“I think that was a decent performance and I’m just hungry,” said the winner.

“I just want to be a world champion, a unified world champion and I know I can do it. I’m a beast. Give me activity and I will show the world what I can do. I’m a monster. All these guys have been hiding from me but now I’m on the scene.”

Riakporhe scored his second win in a month but he’d been active for more than 20 months beforehand.

Durodola lost his challenge to Ilunga Makubu in seven rounds in 2020.

Performance of the night came from Dan Azeez, who won the British light-heavyweight title with a punch-perfect seventh-round stoppage of veteran Hosea Burton.

There were also undercard victories for Natasha Jonas over Vaida Masiokaite, hot prospect Adam Azim over Stu Greener and Azim’s brother Hassan over Ivan Njegac. The brothers are being trained by Shane McGuigan.

Another London cruiserweight Mikael Lawal improved to 15-0 with a fifth-round stoppage of Italian Leonardo Damian Bruzzese.