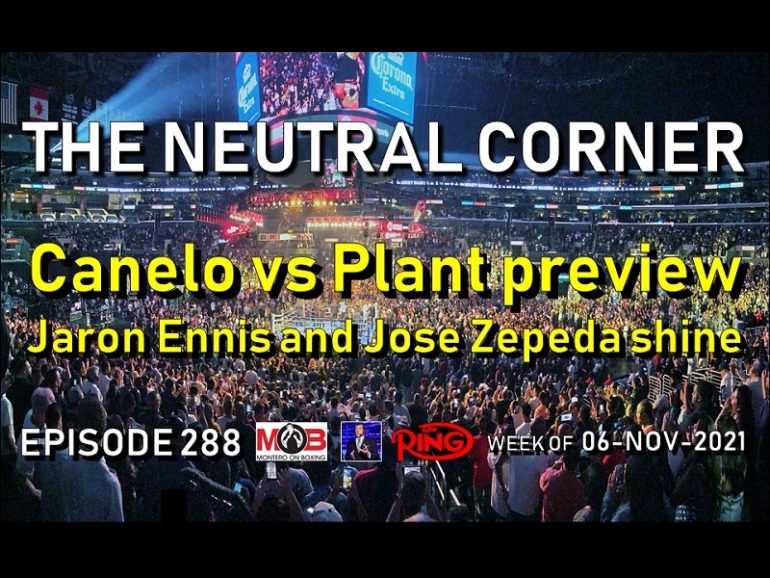 On Episode 288 of The Neutral Corner boxing podcast, host Michael Montero caught up on a busy news week in the fight world.

Rolly Romero, who was set to face Gervonta Davis on December 5 in Los Angeles, withdrew from the bout due to allegations of sexual assault by multiple women on social media. Mexican lightweight contender Isaac Cruz is the likely replacement.

Jose Uzcategui tested positive for PEDS and is out of his scheduled super middleweight fight with Davis Benavidez. Uzcategui has been replaced with New Jersey native Kyrone Davis.

Multi-division women’s champion Claressa Shields lost a split decision to Abigail Montes in a mixed-martial arts fight last week. Shields, who is set to return to the boxing ring on December 11 against Ema Kozin in England, is now 1-1 (1 knockout) in MMA. Savannah Marshall, who defeated Shields in the amateurs, fights on the same card. Marshall holds the one middleweight title currently not in Shields’ possession.

There were three cards of note on Saturday, October 30. In London, Chantelle Cameron beat Mary McGee by unanimous decision to unify the junior welterweight titles. The fight headlined a Matchroom Boxing card on DAZN.

In New York, Jose Zepeda flattened Josue Vargas in the first round of their 140-pound headliner on a Top Rank card that was broadcast live on the ESPN+ app. Zepeda (35-2, 27 KOs) figures to be in line for a title shot against undisputed champion Josh Taylor at some point in 2022. In the co-main, Jonas Sultan of the Philippines scored an upset UD 10 win over Carlos Caraballo in a bantamweight bout.

In Las Vegas, Radzah Butaev scored a come-from-behind TKO 9 win over the favored Jamal James in a “PBC on Showtime” headliner. Butaev, who was born in Russia but is now based in Brooklyn, improved to 14-0 (11 KOs) with the victory. In the co-main, Philadelphia native Jaron “Boots” Ennis (28-0, 26 KOs) scored an explosive KO 1 win over veteran Thomas Dulorme. Could a Butaev vs. Ennis matchup be next?

“I think Maiva Hamadouche is going to knock Mikaela Mayer out,” said Thad. “She has a pressure style; she’s one of the heaviest female punchers. I think she breaks Mayer down.”

“I’ve got my “chip clip’ ready to hold over my nose when I watch the Canelo vs. Plant fight,” said Abraham of NYFights.com. “I feel Plant is going to make this a stinker. It’s either going to be a late stoppage or a boring one-sided decision for Canelo.”

“Right now, the hype train has gotten out of control with Jaron Ennis,” said Nacho. “We need to see him against a fighter who’s as big and strong as he is, who can take a punch, in order to see Boots really tested.”

Joe Habeeb of the Ringside Reporter podcast was very impressed with Ennis last Saturday. “Obviously Thomas Dulorme has some miles on him,” said Habeeb, “but look at the guys he’s fought. Yordenis Ugas and Jamal James went the distance with him. Boots got rid of him in a round.”

“Canelo is one of the last stars who was built during the pre-social media age,” said Miguel. “This guy fought [Floyd] Mayweather on cable PPV, on TV, not a stream or an app. And he made the best out of every opportunity after that fight. Now he’s a superstar.”

“Canelo learned a lot about the business of boxing when he fought Floyd,” said CJ Duncan from Las Vegas. “He learned how to pick and choose his opponents. After he unifies the super middleweight division, I can see him getting back with Eddie Hearn. There’s still a payday to be made with Gennadiy Golovkin but a lot will depend on how [Golovkin] looks in his upcoming fight with Ryota Murata. That [Artur] Beterbiev fight will be there but he’ll try to age him out first.”