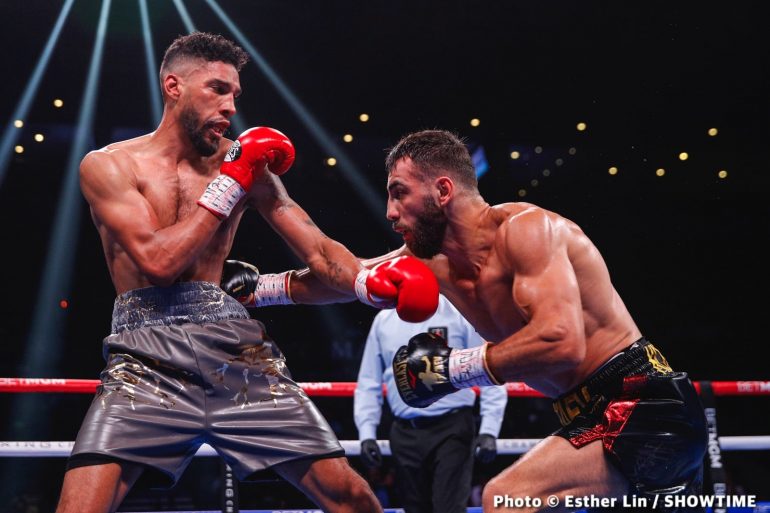 Nearly two years after he was robbed in his first high-profile opportunity against Alexander Besputin, the Russian-born Butaev beat the brakes off Jamal James and stopped him in the ninth round of their Showtime main event from Mandalay Bay Resort & Casino’s Michelob ULTRA Arena in Las Vegas.

The official time of the stoppage was 2:12 of the ninth round.

“It’s a big first step. [It has] always been my dream to become a world champion,” Butaev stated through an interpreter. “I took the first step today and I’m very happy.”

James, who saw a seven-bout winning streak go by the wayside, was stopped for the first time in his 11-year pro career.

“I’m good. It wasn’t my night tonight. A big shout out to Butaev and to [Jaron ‘Boots’] Ennis. They did their thing tonight.”

The victory was sweet redemption for Butaev, who was jobbed in a November 2019 bout against Besputin when the Russian tested positive for Ligandrol, an SARM (selective androgen receptor modulator) that can stimulate muscle growth and is on the World Anti-Doping Association list of prohibited drugs. The bout, initially ruled a 12-round unanimous decision win for Besputin, was later changed to a no-contest, which also turned out to be an accurate description for Butaev-James.

James landed solid shots during the fight but the 27-year-old Butaev, who resides in Brooklyn, New York, was never hurt, walked through the flames and eventually knocked the carburetor out of James.

“I felt it could have ended a lot worse [for James]. I thought it was stopped at the right time. I thought James showed a lot of heart tonight.”

The keys to victory were the body shots. In Round 2, Butaev connected with thudding connects downstairs that left James visibly grimacing in pain. However James tried his best to keep his man at bay with the jab but Butaev, reminiscent of the T-14 Armata, just kept rolling on through.

James connected with a pair of solid uppercuts in Round 3. However Butaev fired back with solid shots of his own, one of which was landed behind the head, earning him a stern warning from referee Celestino Ruiz. 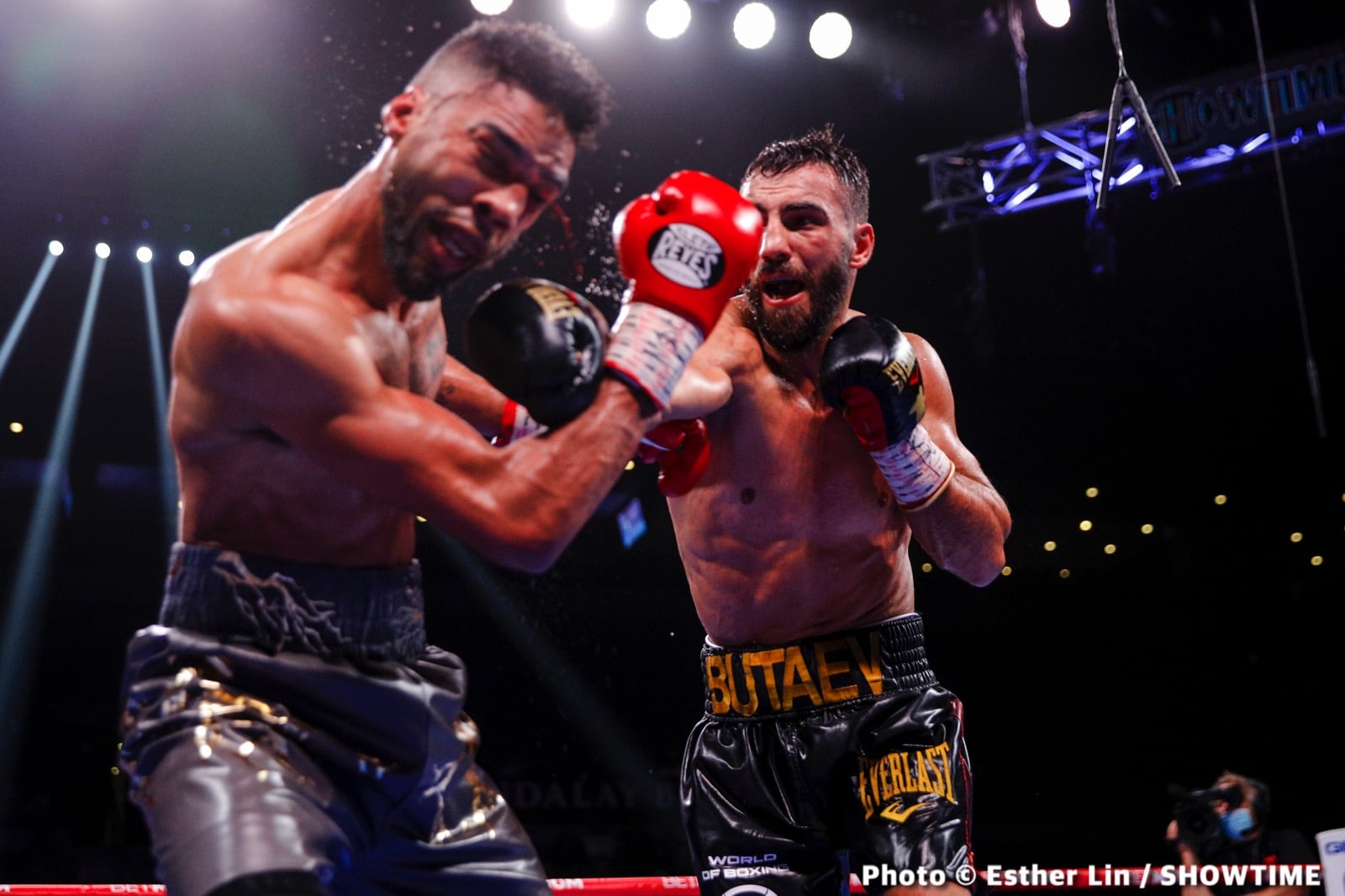 Both fighters clashed heads in the fourth round but James appeared to get the worst of it as he backed into the ropes, allowing Butaev to capitalize with a slew of hard shots to the head and the body.

Butaev hurt James with a right hook late in the fifth round but was deducted a point by Ruiz shortly thereafter but James turned around and put himself in that position.

The brief break in the action was not enough to stop Butaev’s momentum as his success continued into the sixth frame, when he rocked James with yet another right hand.

Butaev returned to the body in the seventh frame and brutalized James’ ribs with an array of punches that forced him to reach into his reserve tank. However a second wind ultimately ceased due to the pressure from Butaev, who sent James into the ropes in Round 8 and attacked the body once more.

“We worked hard on switching up and did it in sparring and it worked, so we kept doing it,” Butaev added.

The ninth round was a one-sided abomination, which prompted Ruiz to stop the fight, to the chagrin of James and those in the crowd.

“I have nothing against the ref’s decision [to deduct a point],” Butaev stated. “I like to have a back-and-forth fight and I don’t like [the action to be stopped].

“I have an exciting style. [Ruiz] saw it the way he saw it. I have no problem with the stoppage.”

Undefeated welterweight Jaron “Boots” Ennis made an excellent case for why he will eventually usurp Canelo Alvarez’s position as the top pound-for-pound superstar. 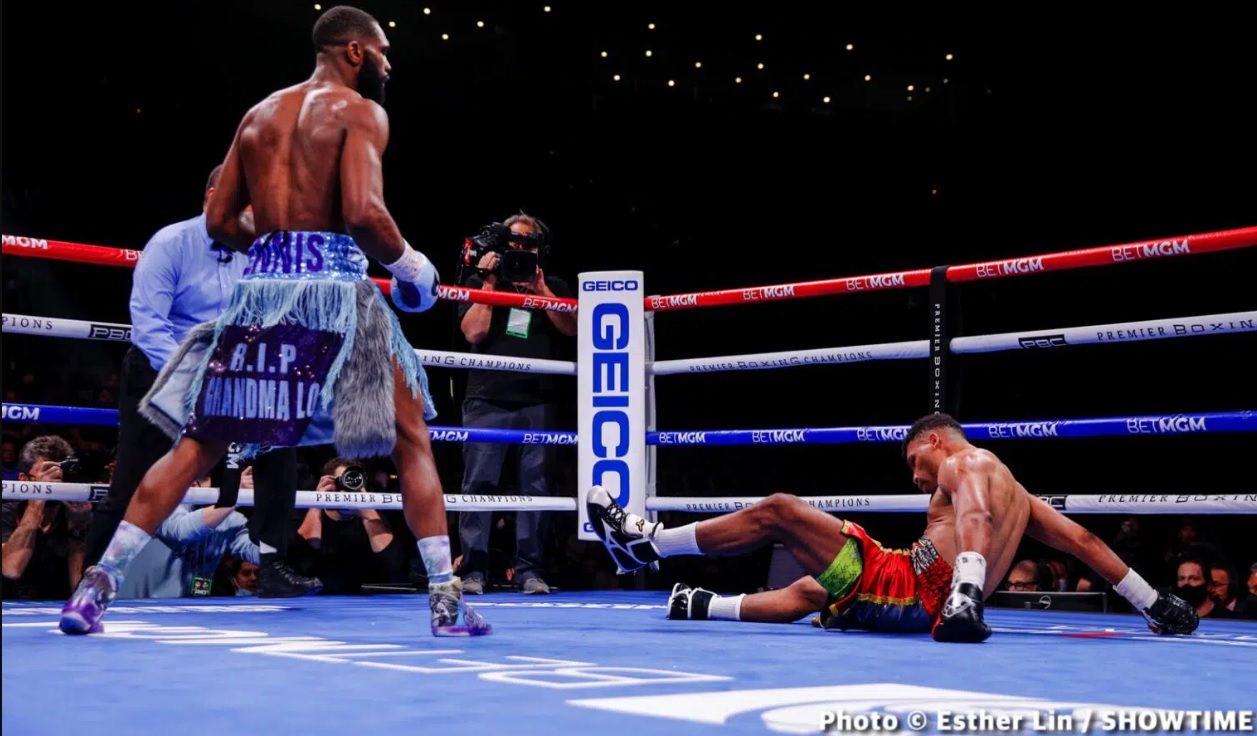 The 24-year-old took a huge step up in competition in April when he dominated and battered Sergey Lipinets. Ennis, ranked No. 7 at 147 pounds by The Ring, floored the former 140-pound titlist twice en route to a highlight-reel sixth round knockout. Saturday was no different as he dropped Dulorme twice in the opening round, once with a right hand near his left ear and again with a scintillating right hook/straight left-hand combo that sent the Puerto Rican down flat on his back.

In his prior 31 fights, Dulorme (25-6-1, 16 KOs) had only been stopped twice. Those defeats came at the hands of Luis Carlos Abregu and Terence Crawford.

“It was a good knockout,” he stated after the contest, “but you know me, I wanted to show my skills and ability but I couldn’t and I got a big knockout. Let’s get them big names. Let’s go.