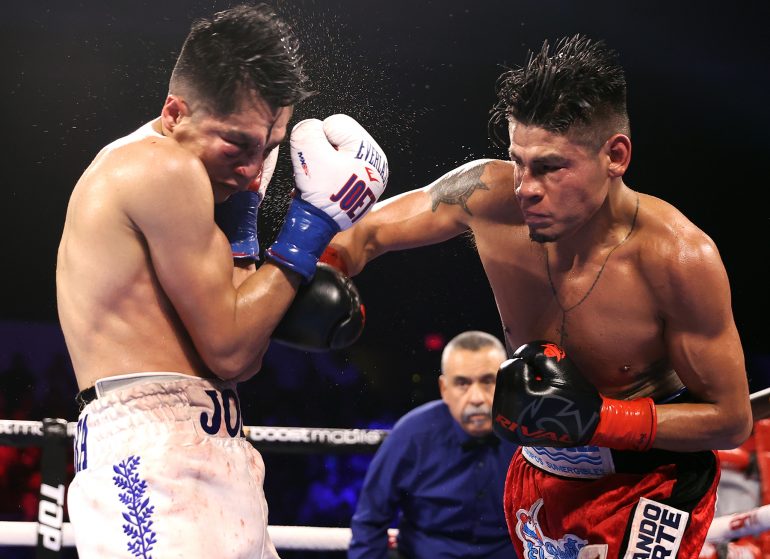 Last Friday, Emanuel Navarrete successfully retained his WBO featherweight title for the second time with a hard-fought 12-round unanimous decision over granite-chinned Joet Gonzalez at the Pechanga Arena in San Diego.

Navarrete, who is rated No. 1 by The Ring at 126 pounds, expected a hard fight but got a little more than he bargained for.

“The fight with Joet was tougher than I thought [it would be],” Navarrete (35-1, 29 knockouts) told The Ring through Mauricio Gonzalez. “I knew he was a fighter that came forward. He was a bit dirty. It was a good fight.”

However the 26-year-old Mexican punching machine feels he’s had other more difficult fights.

“I don’t believe it was my toughest fight,” he said. “You can rank it up there as one of my tougher fights but it’s not the toughest fight I’ve been in.

“The outcome was good as far as the victory. It was more complicated and [was] a little more [difficult] than I thought.”

This was Navarrete’s 10th world title fight in less than three years, making him one of the most active titlists in the sport today.

Afterward, at ringside, his promoter Fernando Beltran was talking up the possibility of a fight with WBC junior lightweight titlist Oscar Valdez. Navarrete, who will take two weeks off, isn’t so sure if that fight will be next.

“I don’t know if that’s the case,” he said. “Things have been written and said about that but I have to sit down with my team and Beltan and see what the next step is and what the best option is.

“If there is a good enough offer, fight and opportunity at 130, I would definitely contemplate it. There is nothing set in stone. I am still at 126. It’s not out of the question but I’m not ready to say, ‘I’m jumping to 130.’ I still have to see what the best options are.”

One thing is for sure; whether Navarrete faces Valdez next or someone else, he’s much-watch TV.