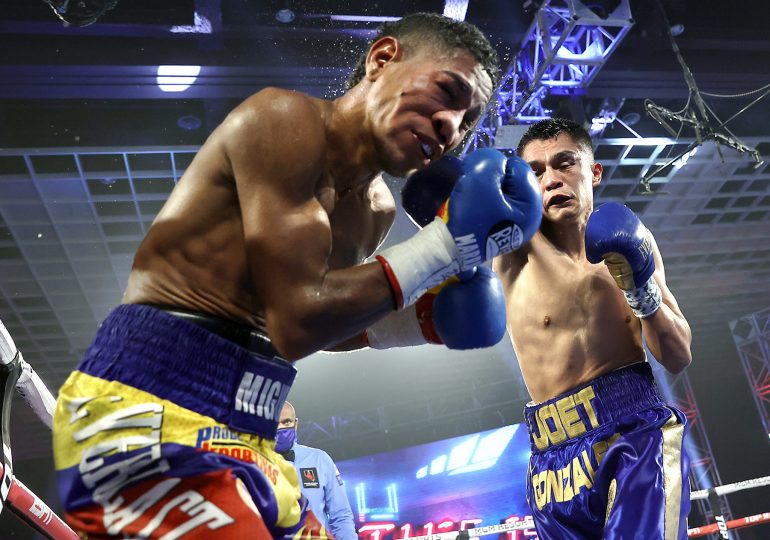 Joet Gonzalez isn’t here to correct the score. He knows he came up short in his first title opportunity, a wide unanimous decision loss to Shakur Stevenson in October of 2019. He offers no excuses, and has made peace with the outcome.

Styles make fights, he figures, but circumstances create urgency. That’s the mindset he brings to the ring this Friday when he gets his second chance at a belt, facing WBO featherweight titleholder Emanuel Navarrete at the Pechange Arena in San Diego, Calif.

The bout, which headlines a Top Rank card that will be televised on ESPN+, marks Gonzalez’s third straight appearance as the “opponent,” a situation that he feels comfortable with.

That mentality served him well in his last outing, which was his first since his first loss. Gonzalez figured he stood in the way of Miguel Marriaga’s plans of a fourth world title opportunity when they met last September. Marriaga had fallen short in world title opportunities against Nicholas Walters, Oscar Valdez and Vasiliy Lomachenko, and had hoped to get another shot with a win over the reeling Gonzalez.

Instead, Gonzalez put together a comprehensive performance, dominating the tough Colombian and nearly knocking him out in the tenth before winning a wide decision.

“It was pretty much a fight that I needed to win to show the boxing people that I am a contender, that one loss doesn’t define me. I’m here to fight the best fighters, the top fighters and that win proves that,” said Gonzalez.

Navarrete won the vacant belt that Valdez had vacated, outpointing Ruben Villa a month after Gonzalez defeated Marriaga. Gonzalez, the no. 1 contender, figured to be next in line, but had to wait while Navarrete made his first defense against Top Rank stablemate Christopher Diaz.

Navarrete (34-1, 29 KOs) had to rise above the odds himself in order to get where he is. The 26-year-old from San Juan Zitlaltepec, Mexico was virtually discounted before heading into his fight against Isaac Dogboe for the WBO junior featherweight title. After starting slow, the taller, longer Navarrete began to wear Dogboe down, pounding out a unanimous decision that was much closer on the cards than it was in the ring.

After five defenses, Navarette has shown he still has the size, punch volume and awkward angles to befuddle featherweights.

Gonzalez says the difference between him and past opponents is that he has the strength to match the unconventional Navarrete.

“He’s a fighter, he’s here to please the people and give them a great show. But I just feel like he’s fighting a natural featherweight this time,” said Gonzalez, who is promoted by Golden Boy Promotions.

Gonzalez has been training with his father, Jose Gonzalez, in the Los Angeles suburb of La Verne, Calif., sparring with his brothers and some local amateurs to get ready. He says he has a few qualities that make him different from everyone else Navarrete has had to deal with at this level, and that will be what carries him to a world title.

“I think my size is one of them, I think my mentality. I’m a fighter that doesn’t quit, I look to fight the best fighters out there,” said Gonzalez.