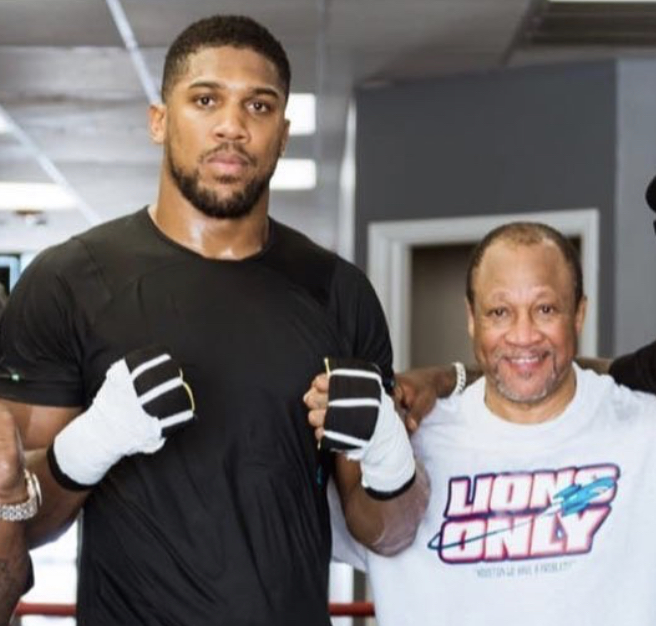 It’s a certainty in the sport, chatter can ensue after a heralded vet who’s been with a trainer for a long spell loses a big bout. The chatter is guaranteed if it’s perceived the vet, roughly in their prime years, hasn’t been progressing.

For sure, the subject came up right after Anthony Joshua’s hand didn’t get raised in his Sept. 25 faceoff with Oleksandr Usyk. 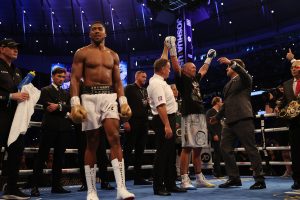 Oleksander Usyk beats Anthony Joshua, and the engines of speculation roar to life. Does AJ need a trainer change?

Now, losing to a talent like Usyk is no grounds for embarrassment, and yes, plenty of fans and pundits are clued in enough to realize that. I realized that, but it didn’t stop me from musing aloud, on Sept. 29, in whether it might serve AJ well to do a trainer tweak.

OK, I did a little more than muse, and I’m not saying that proudly.

I feel just a bit funny about going there, because I get it, trainers are people too.

I see a long-standing relationship, like the one Joshua has with trainer Robert McCracken, as being a sort of marriage.

And that’s playing with fire, it’s a ‘bad karma’ alert, meddling in a marriage.

But my reticence only goes so far, because this is the boxing business, and that means it’s about 1) money and 2) winning.

There were high expectations for Joshua the minute he took gold at the 2012 Olympics. For good reason—this looked to be a ‘total package’ type talent, with a solid skill set, including ample pop, paired with a telegenic face, a drool-inducing physique and an amiable if slightly bland personality.

He didn’t, however, build on the momentum of beating Wladimir Klitschko as many predicted. Wins over Carlos Takam, Joseph Parker and Alexander Povetkin, but didn’t pile up as many style points as his most ardent rooters pictured. Then, the horrific visit to New York played out as the opposite of the inter continental breakout it was booked to be. Whispers and conjecturing ramped up then, but got mitigated by the focusing done on the boxer himself. 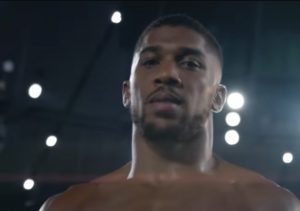 Joshua likely meditated hard on the possibility of a trainer switch.

To AJ’s credit, he didn’t deviously try to steer attention away from himself, when reporters sought clarity on how and why the Brit lost to the Snickers guy, toward trainer McCracken. Nor did he do that after the decision drop to the Ukrainian ring general extraordinaire.

Plans were made, though, after earnest discussions in low decibels. We learned today that Joshua has been doing a tour of visits to teachers he thinks might be a good addition to his team. On Tha Boxing Voice show, Texas trainer Ronnie Shields said that Joshua and him met, and chatted. 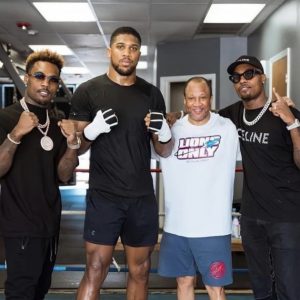 I reached out to Shields, a low key no drama sort, and he said after I asked if a meeting went well, “Meetings went great.”

So, is it a done deal, or did the 28-2 Brit pugilist indicate he will talk to other trainers still, and then decide? “They will let me know soon,” said Shields, who helmed Evander Holyfield and now seconds Jermall Charlo as well as Erislandy Lara.

“And you feel you would be a good fit, or the best fit,” I inquired. 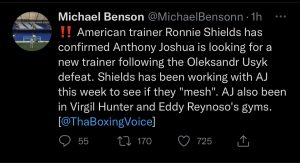 The news broke on Tha Boxing Voice. Yep, AJ wants to go back to a different drawing board.

I told you the ex pro pugilist (1980-1988) Shields is low key, he passed on the offer to lay out his case, on what makes him best suited to get handed the wheel McCracken’s been gripping since late 2016.

What say we throw it to you?

Readers, who do you think would be the best fit if indeed Joshua does choose to revamp the routine, invite new eyes and a different voice into the fold?