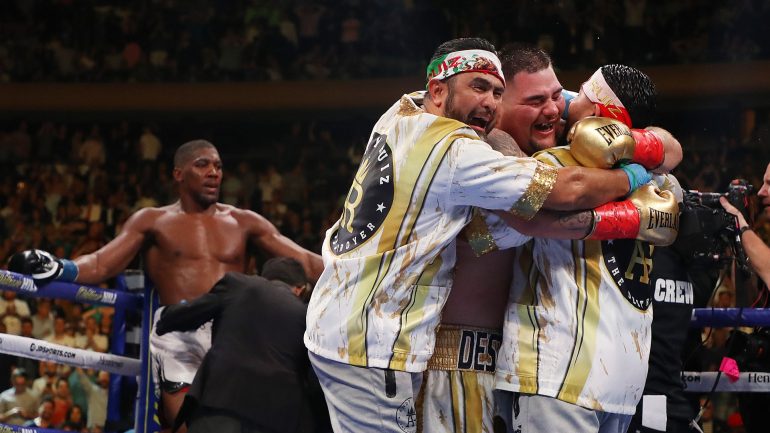 NEW YORK, N.Y. –British fans who packed Madison Square Garden to witness Anthony Joshua’s U.S. debut on Saturday expected have to good time drinking beer and singing along to songs like Neil Diamond’s “Sweet Caroline” and Oasis’ “Wonderwall.” The main event was an afterthought, just a reason to gather and party.

Well, Andy Ruiz, the late substitute who stepped in for the disgraced Jarrell Miller and given no shot at winning, crashed that party – hard.

Joshua’s fans were instead witness to one of the biggest upsets in heavyweight boxing history. Ruiz, a 15-to-1 underdog, got up from a third-round knockdown and dropped Joshua twice before the bell, then stalked and banged up the British star until scoring two more knockdowns in Round 7 when referee Michael Griffin waved the bout off.

From the moment the two heavyweights let their hands go in Round 3 it was breathtaking sport. Heavyweight shootouts are rare and, clearly, that kind of fight suited the flabby but gutsy Ruiz (33-1, 21 KOs) more than it did a normally calculating boxer-puncher like Joshua (22-1, 21 KOs), who may have made a critical error by jumping on the Mexico-born fighter after dropping him with a big left hook and trying to close the show in that round. Ruiz got up with clear eyes and got the better of Joshua while trading hooks on the inside. Down went Joshua and he didn’t recover as well as Ruiz. (I guess you can’t judge a book by it’s cover.)

Ruiz put Joshua down a second time just before the bell, and appeared to have let the 2012 Olympic gold medalist off the hook by not pressing harder in Rounds 4 and 5, but the Londoner never seemed to recover his wits or confidence completely. Although Joshua landed some good shots in Rounds 5 and 6, Ruiz still seemed in command, especially when he fired his right to the body and came over the top with it, followed by quick hooks.

It was a hook that put Joshua down early in Round 7 and essentially ended the fight. Ruiz went for it this time, opening up on Joshua, who gamely fired back and landed some choice shots, but was ultimately overwhelmed and sent to the canvas again on what looked like a slip. But when he got up he couldn’t convince Griffith that he could continue.

And just like that three major world titles changed hands, the most lucrative fight that could be made in boxing — the showdown between Joshua and unbeaten WBC beltholder Deontay Wilder — fell by the wayside, and the biggest heavyweight upset since Hasim Rahman iced Lennox Lewis with one right hand in South Africa back in 2001 was delivered to the boxing world.

Lewis was able to gain revenge and his world titles back with the rematch. Can Joshua do the same? His promoter Eddie Hearn said there’s an immediate rematch clause and the two will do it again in England.

Until then, Joshua concedes the No. 1 heavyweight spot to fellow Brit Tyson Fury or Wilder depending on who you talk to. Wilder is set for a rematch with Luis Ortiz in September and Fury returns against unheralded Tom Schwarz in Las Vegas on June 15. If they both win, they are expected to have a rematch of their controversial draw, which could be for the vacant Ring Magazine title (and definitely the mythical “lineal champ” status will be on the line).

However, the sport will be without an undisputed champ until Ruiz and Joshua settle their business and the winner dares to face Wilder or Fury.

If there’s a lesson to be learned in the Joshua-Ruiz upset it’s that heavyweights should not allow for big fights to marinate.