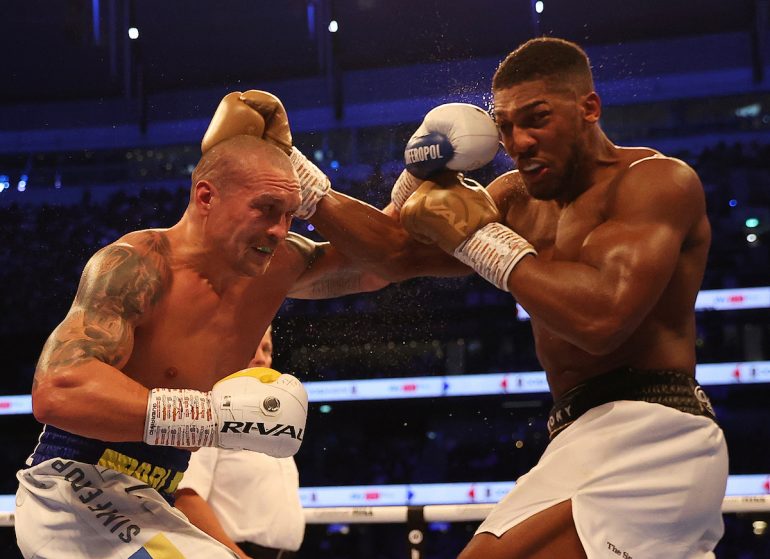 Oleksandr Usyk started fast and finished strong in his challenge to unified heavyweight titleholder Anthony Joshua, who had his moments during the middle rounds of their Saturday showdown in London, but “AJ” couldn’t solve the difficult style of the busy and mobile former cruiserweight champ. Usyk scored a tremendous upset with a brilliant and gusty performance that earned him a unanimous decision in front of 67,000 at Tottenham Hotspur Stadium. 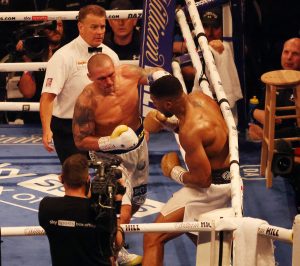 Usyk lets it all hang out in the final seconds of Round 12, pinning an exhausted Joshua to the ropes. Picture By Ian Walton Matchroom Boxing

Usyk (19-0, 30 KOs) was 20 pounds lighter than Joshua, the crowd and odds favorite, but he stunned the bigger man at the end of Round 3 and had the English superstar drained, reeling and hurt along the ropes in the final seconds of a dramatic Round 12. After a sluggish start, Joshua (24-2, 22 KOs) made adjustments and began to apply subtle pressure during the middle rounds, landing his straight right and choice body shots. However, Usyk proved to have a solid chin and the better engine of the two 2012 Olympic gold medalists, surging hard down the stretch (especially in the final round).

“The fight went exactly the way I expected it to go,” Usyk said during his post-fight interview. “There were a couple of moments when Anthony pushed me hard, but nothing special.

The Ukrainian hero, No. 4 in The Ring’s pound-for-pound rankings, won by scores of 117-112, 116-112 and 115-113, fair scores that further proved Usyk’s elite-boxer status. Joshua, who suffered swelling around his right eye from the many left hands he was caught with during the mostly tactical battle, was The Ring’s No. 1-rated heavyweight going into the mega-event. That spot, just under Ring champ Tyson Fury, might be taken by the brilliant gutsy southpaw, who was the No. 10 contender going into his WBA/IBF/WBO heavyweight title challenge. 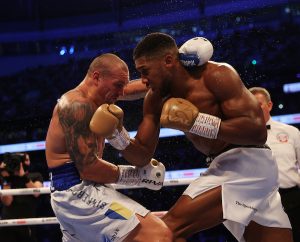 Joshua’s promoter Eddie Hearn noted that his fighter had done well in the middle rounds vs. Usyk, making the fight close, but the former cruiserweight champ took over the late rounds. Picture By Mark Robinson Matchroom Boxing

“No complaints from AJ, he will come again,” said Matchroom Boxing boss Eddie Hearn, Joshua’s promoter. “We have been here before (with Andy Ruiz), that was different. [Joshua] was beaten by a better man on the night.

“The fighter in AJ is saying ‘I will win the rematch.’ I had it reasonably close in the eighth round but then Usyk ran away with it. Usyk was the deserved winner and he’s got to make changes for the rematch.”

Usyk said his immediate thoughts were on his family, who he hasn’t seen since January as he prepared for the biggest fight of his career, but he had a warning for Team Joshua and anyone who would doubt his ability as a heavyweight:

“You didn’t see the best Usyk, I can be much better.”