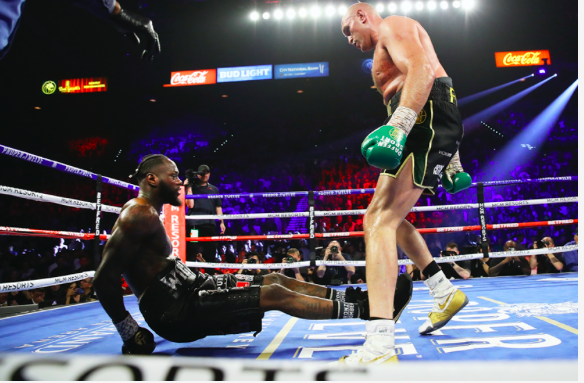 LAS VEGAS – The first time Deontay Wilder and Tyson Fury fought in December 2018 at Staples Center in Los Angeles, the fight ended in a disputed split draw, with Wilder retaining the WBC heavyweight title but most viewing Fury as the rightful winner despite getting knocked down twice.

But in the rematch, at the MGM Grand Garden Arena in Las Vegas, Fury dominated to take the WBC belt and reclaim the vacant Ring title. Fury scored two knockdowns and stopped Wilder in the seventh round when his now-fired assistant trainer Mark Breland threw in the towel as Wilder was being pummeled.

In the aftermath of his first defeat and the end of a five-year title reign, Wilder made one excuse after another to explain the reason for his lopsided defeat.

— He claimed, with no evidence, that Fury manipulated his gloves to make them illegal, giving him an unfair advantage. He also claimed Fury’s gloves contained a foreign object, such as an egg weight.

— He said Breland spiked his water, despite presenting no evidence or assigning any motive to a man who had been with Wilder since his pro debut.

— He claimed that the outfit he wore into the ring, at around 40 pounds of gear, was too heavy and that it caused his legs to be weak for the fight.

— He claimed referee Kenny Bayless allowed Fury to get away with illegal punches behind the head and had not adequately protected him from the fouls.

“I don’t really make much of the excuses that were flying around for so long,” Fury said. “I think they just made him a weaker character and less of a man and less of a fighter, because when you get beat, you get beat. Shake the man’s hand and move on. Lots of fighters have lost. Muhammad Ali lost fights, Mike Tyson lost fights. It’s what they do after they lose that makes them who they are.

“I don’t really have a lot to say about what Deontay Wilder was saying. It’s none of my concern because when some people lose, they have to make up an excuse for why they lost and that’s what Wilder’s reason is for convincing himself about whatever happened. That’s up to him, so good luck to him in the fight, and we’ll see if he can do anything better.” 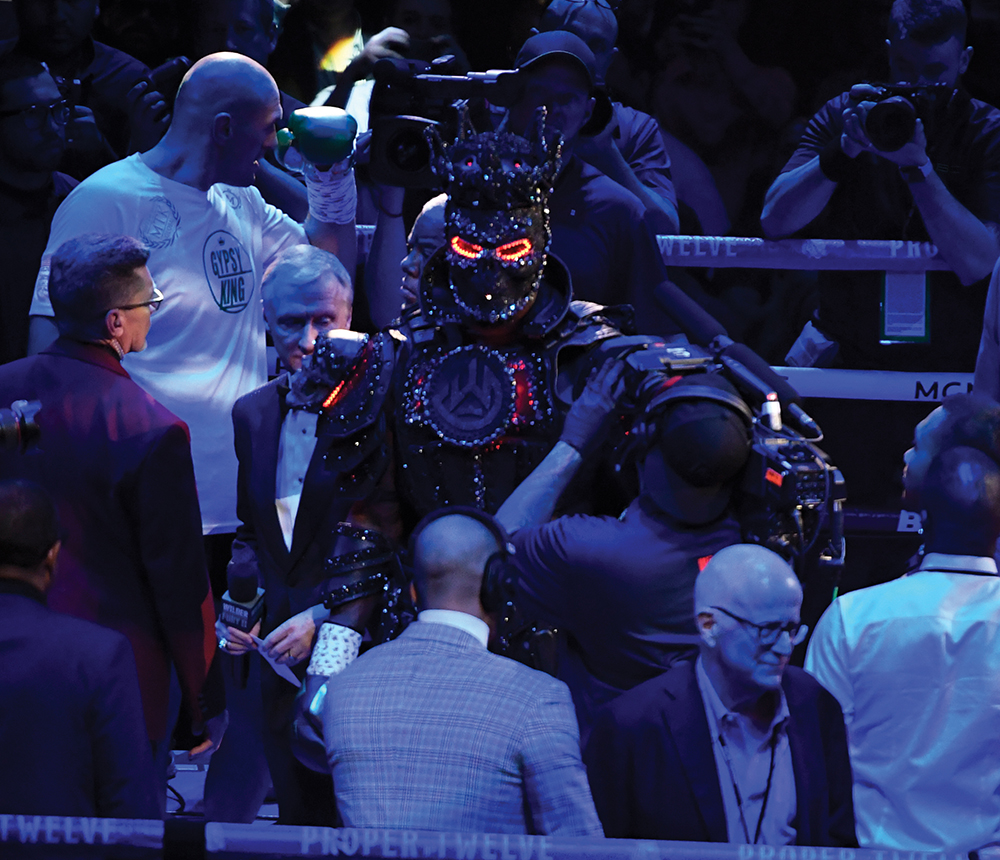 Wilder’s accusations that Fury cheated in the rematch were raised again during the final pre-fight news conference at the MGM Grand Garden Arena on Wednesday ahead of their third fight, which will take place on Saturday (ESPN/Fox Sports PPV, 9 p.m. ET) at T-Mobile Arena only because Wilder won an arbitration case to force Fury to fight him again under the terms of the rematch clause in the contract for their second fight.

“I don’t regret it and I will go to my grave believing what I believe in,” Wilder said of his insistence that Fury had illegal gloves and cheated. “I know things for fact. I have confirmation of a lot of things. Men lie, women lie but your eyes don’t lie about what you see. People can believe what they want. We’re human. We believe what we want but the eyes don’t lie.”

Asked to respond to Wilder’s continued accusations, Fury, who stood throughout the nationally-televised news conference despite there being a chair for him on the stage and being gently asked by host Kate Abdo to please sit down, said he was not concerned about them.

“I don’t care, obviously, because it’s coming from an unwell person,” Fury said of Wilder. “He accused me of everything, accused his team, his trainer, the suit, injuries, the athletic state commission of Nevada was in on it as well, the referee, whoever else. Maybe if he had one of these excuses it would have been believable, but not 50, come on!

“He can believe what he wants. What it tells me is he’s a weak, mental little person who I’m gonna knock spark out on Saturday night. I beat him the first time after three years out of the ring, quite comfortable actually. He won two rounds of a 12-rounder. I absolutely obliterated him in the rematch. Didn’t even win any of the rounds. And in this third fight I just see much more of the same.

“He’s even copying me. Look, he’s got no t-shirt on (under his jacket). He learned that from me. I’m famous for wearing no shirt at press conferences. This guy’s copying me all of the time. I know I’m an inspiring person and everybody wants to be like T. But he’s supposed to be ‘The Bronze Bomber.’ Do your own thing. Stop copying ‘The Gypsy King.’ I hope you have your excuse book ready.”

Fury further mocked Wilder, by embracing the notion that he cheated.

“It’s all true! I had knuckle dusters on,” a sarcastic Fury said. “I don’t have to deny it, it’s all true!” 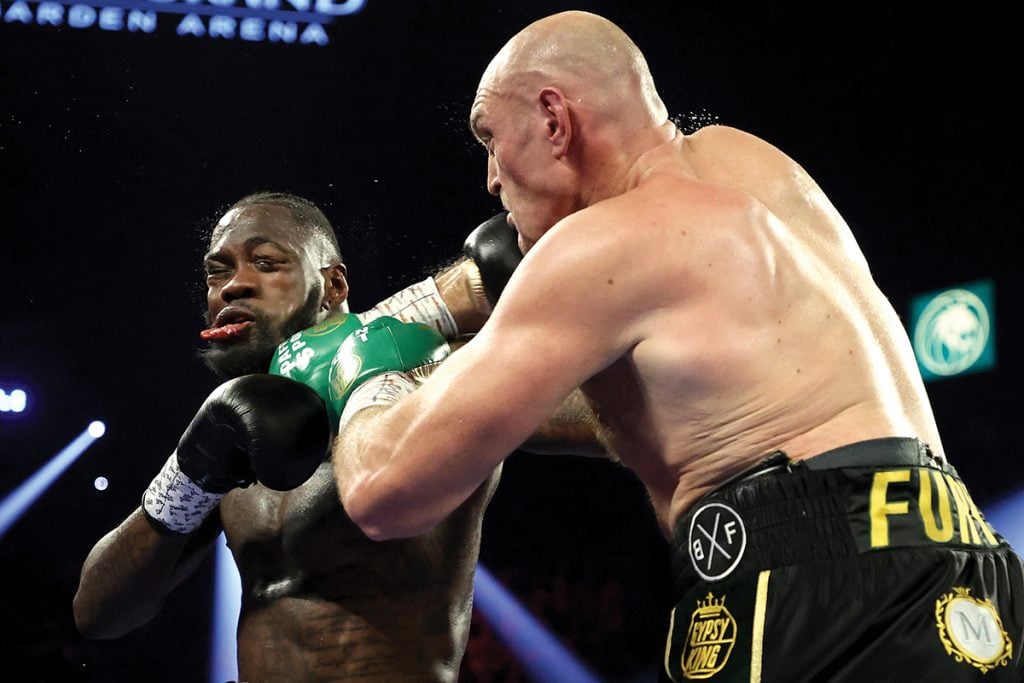 Near the end of the news conference, Fury, clearly annoyed, used much of his closing comments to address Wilder’s accusations of cheating.

“Why, if I won the second fight only because I cheated, (did) he go back and change his team and does all this extra training?” Fury asked, referring to Wilder’s firing of Breland, demotion of career-long head trainer Jay Deas and the promotion of assistant trainer Malik Scott to head trainer. “If I only won because I cheated what was the point in changing everything and doing all this other work? Can anybody answer that question? I know he can’t. Doesn’t have the brains to. No one can answer that question, can they?”

Fury also questioned why if he had tampered with his gloves or had a foreign object inside them would Wilder still employee Deas as an assistant when it was Deas who was in the Fury dressing room before the rematch to observe his hand wrapping and being gloved up?

“Jay Deas was in the room when I was putting my gloves on. Why didn’t he say something then? He’s in on it too! You’re a weak man,” Fury shouted at Wilder.

Fury has tested positive for banned substances related to two different fights, including one in which he claimed that eating wild boar meat was the reason a banned substance was in his system.

“(Wilder) says he wants to do bad things to me and hurt me and all this, and he has anger and aggression,” Fury said. “Well, for those who hold a hot coal with the intentions of throwing it at somebody, guess what? They’re the ones who are gonna get burned. I don’t want to hurt Deontay Wilder, I just want to beat him in a fight, and he knows what he’s saying is lies. Deep down in his soul he knows he lost and he’ll lose again.

“He lost the first time, he lost the second time and he’s gonna lose the third time, and guess what? After this fight you’ll be back to working in that fast food chain he was working at early on in his career, because that’s the only place he’ll be welcome. Retirement, dosser!”