What the hell is Tyson Fury thinking? 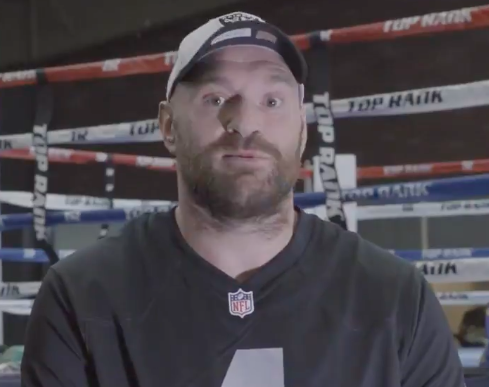 For the last few months, Deontay Wilder has been on message, he looks to be dialed in, syncing nicely with trainer Malik Scott, and word in certain circles is that he’s stronger physically and in a real good place mentally for the third tussle between him and Tyson Fury.

In case you missed it, Keith Idec from Boxing Scene spoke to the 6-9 Traveller, and the heavyweight titlist shared that he didn’t receive a second vaccination jab after getting a first dose earlier in the summer.

“Fury confirmed he had one shot either in “July or June,” but he stated that he won’t get his second shot until after his third showdown with Wilder on October 9 at T-Mobile Arena in Las Vegas,” wrote Idec on Wednesday. “Fury didn’t specify whether he took one shot of the Moderna or Pfizer vaccine. He decided before their third fight was postponed early in July, however, that he would wait until his third fight with Wilder ends to get his second shot.”

Why not follow the directive of the docs, who tell you to adhere to the routine set by the vaccine manufacturer?

Fury told Idec that he didn’t get jab number two because he was worried about side effects from the follow-up stick, which often does confer mostly mild side effects on the recipient. Me, I felt just a bit weak and weary the day after receiving my second hit of the Moderna formulation back in the end of February. Two days after the second jab, I felt fine. How many in shape people do you know or have heard being laid up, taken down hard by a vaccine shot? Yep, me too.

But Fury is Fury; he doesn’t just beat to his own drum, he conducts a whole damn orchestra according to his mood. And now and again the tuba is honking and the trumpet is blaring, and the sum of the parts is discordant. Nope, he isn’t one to follow conventional wisdom reflexively. And that is what it is in the current context, which is this: the world is still being massively affected by Covid, going on almost two years since the virus started making the rounds in Wuhan and then beyond. But being that boxing has been dealing with pullouts, cancellations and postponements at a viciously high rate, this isn’t just a shrug your shoulders deal, where you say, “Hey, it’s Tyson Fury being Tyson Fury.” 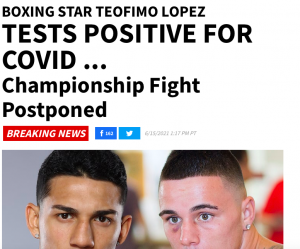 Boxing has been on a really crappy run, with Covid pullouts occurring frequently. It only makes sense for the athletes in the coveted main event slots to try their best not to contract Covid. Does it seem to you like Tyson Fury is doing his best to stay Covid-free?

The bout was to unfold July 24, but on July 8, we learned that Fury, age 33, had Covid. So they pushed the third meeting to Oct. 9. I assumed–and how silly of me was that misstep?–that Fury would take proper precautions so Covid wouldn’t gum up the works again.

But, it’s hard to keep up with it all. And Fury’s not wrong, there’s still so much mystery regarding the virus and how it behaves.

So, you might be thinking to yourself, I bet his “natural immunity” is so high from fighting it off twice, that he’s no threat to get Covid a third time.

You’d be wrong; in fact, docs are seeing unvaccinated people who have been infected keep getting re-infected.

Most all but a slim minority recommend that one gets vaccinated even after fighting off Covid, because the efficacy and duration of natural immunity is so nebulous.

“Nebulous” is the word when it comes to how citizens, I’m not singling out Fury, are receiving information on the pandemic and best practices regarding staying safe.

In the US and elsewhere a lack of trust in government as a whole results in people being unwilling to trust pronouncements from the Center For Disease Control, let alone a politician from “the other team” giving an update or guidance. 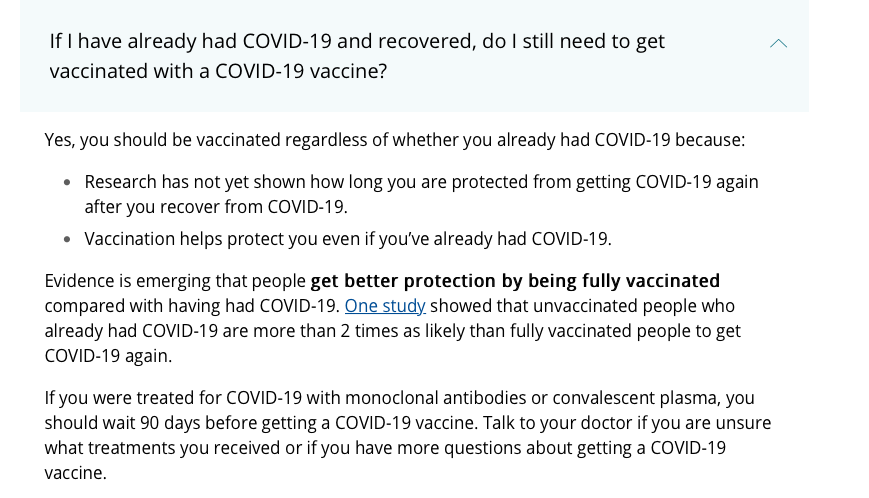 This is excerpted from CDC site

“You never can tell,” Fury told Idec. “There’s so much bullshit with all this, stories that go around, you never know what’s the truth and what’s not. So, I’m not in the risk-taking game. I’m in a serious, life-threatening job, where you can get your lights knocked out with one punch. And if [a second shot] was to affect me in any way, then I’d never live with me self before a big fight.”

It’s almost amusing that Fury talks about all the “bullshit” bobbing about, and it being hard to find the truth. Me, I know my lane, basically, and defer to doctors, scientists, epidemiologists and the like to inform me on how to play Covid. Fury doesn’t tell Idec who he relies on, but I’m thinking he’s not listening to his promoter, Bob Arum, who told me last January that he got vaccinated and he’d be heartily recommending his Top Rank athletes do the same.

Yeah, Fury, to me, IS in the risk-taking game, because I know this. I can read, and I read accounts of overwhelmed ICUs, hospitals turning away patients because they are over loaded with Covid patients with dying lungs. And just last week, I was in the ER with my daughter, and I asked a doc how his Brooklyn hospital is faring during this current surge. “We’re OK,” he said. “But there’s been plenty of cases, and it’s true, 99% of the people are un vaccinated.”

And yes indeed, the vast majority of those unvaccinated folks are older, and/or obese, or have other conditions which predispose them to being more susceptible to the viruses’ wrath. So it’s a good bet Fury’s immune system, which did get a lift from that first vaccine dose, will do its job and get him to the finish line so the Oct. 9 scrap can unfold. But why in heaven’s name is he not going over-board in making sure he’s fit to fight Oct. 9? Really, his analysis tells him there’s more risk in getting the second vaccine dose than in going without, and hoping he doesn’t get Covid a third time?

Some of you who are well versed in the behavior of the virus might point out that flotsam from a Covid infection that has been successfully downed by your immune system sometimes sticks around in your system. Thus, you could easily test positive for Covid, though your viral load isn’t enough to make you sick. You might remember that issue got raised when Top Rank fighter Jamel Herring tested positive for Covid last year; he assumed at first it was a false positive, because he’d gotten infected, gotten over the bug, and was feeling A-OK when a pre-fight test popped for the presence of Covid. 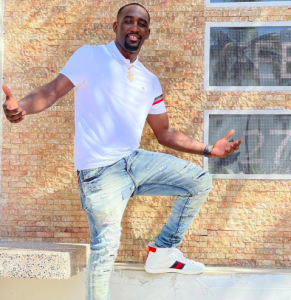 Has anyone checked in with Crawford, to see if he’s vaccinated? Yes, the Top Rank team has been burdened with an XL load in dealing with how politics and ideology hijacked this public health challenge.

And you can be sure people at Top Rank know that the Nevada commission are going by some new protocol, which went into effect July 30: 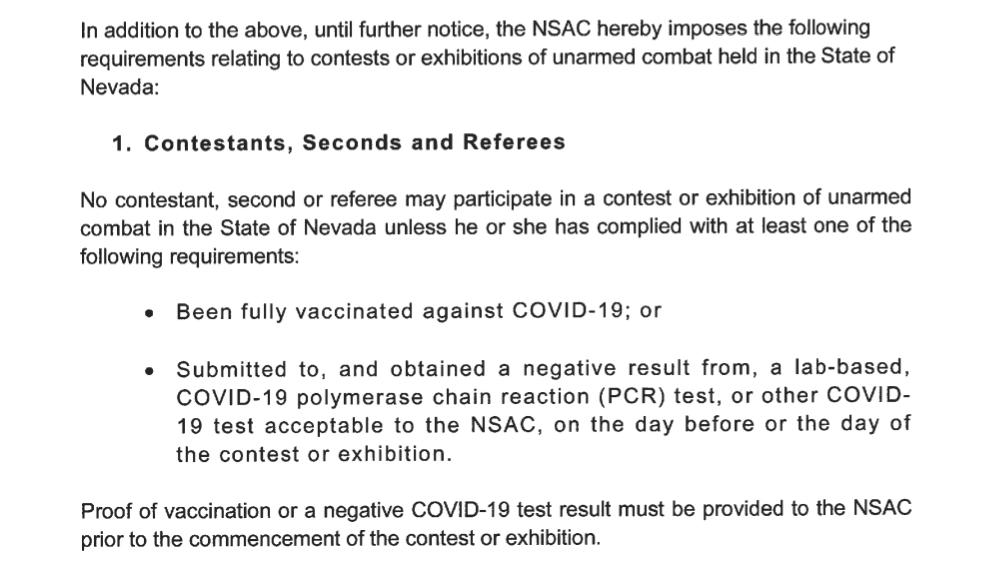 So, if Fury had completed his set of vaccine shots, he would be good to go, wouldn’t need to furnish a negative Covid test from the day before or day of the fight to the Nevada oversight agency. That rule makes sense, because it lessens the possibility that we see a “freak positive” at the eleventh hour. Now, if Fury’s body is one that has viral matter floating about, at a low, basically benign level, he could trigger a Covid positive result the morning of Oct. 9.

Who wants to tell the assembled patrons, ‘Sorry, main event is off, we’ll try again in December?’

And who wants to try and tell Fury his thinking is flawed?

The 30-0-1 ‘Gypsy King’ told Idec, “And it not only would affect my career, but affect my family’s future earnings and taking food out of me family’s mouth. So, when the boxing’s over in the minute, I can go and get me vaccine, second shot, and we’ll see how we go from there. But yeah, for now, I’m just gonna stick with one until after the fight.” It appears he’s thinking there’s more risk in feeling under the weather for a day during a training camp, and needing to take the day off, than there is in getting Covid for a third time, and forcing his expulsion from the third contest between him and Wilder?

Over on the Wilder side, OG Shelly Finkel has been in the game for parts of five decades. He’s seen close to it all, but the saga to get to this third fight is in a league by itself. “Fury was supposed to get his second shot before, he didn’t get it, at the press conference he said he had been vaccinated,” Finkel told me on the phone Friday. “But I’m focused on one thing, and that’s Deontay Wilder winning the title. Everything else is superfluous.” By that, he meant he knows what he can influence, possibly, and what is out of his lane.

“I can do what’s in my power,” the New York deal-maker said. “Fury knows what the consequences are if he pulls out again…but I can’t change his thinking.” It sounds like he’s said his two cents, maybe to Bob Arum, about the import of keeping Covid from messing up another high profile bout. “I know I can have impact on our side. So everyone (involved in the Wilder camp) is vaccinated, a couple are not, but are masked, and taking precautions. I think Tyson Fury is playing with fire. But I’m praying he and his team take enough precautions so he doesn’t get it again.”