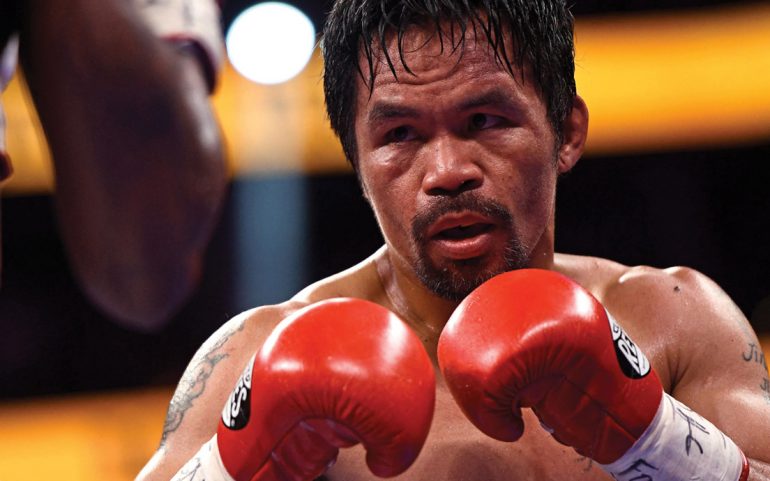 Manny Pacquiao announced his candidacy Sunday for president of the Philippines, running on anti-poverty and anti-corruption sentiments.

The 42-year-old boxing legend made it official at the national assembly of his faction of the political party, PDP-Laban, choosing to accept the nomination for president over running for re-election of his senate seat.

I boldly accept the challenge of running as PRESIDENT of the Philippines. We need progress. We need to win against poverty. We need government to serve our people with integrity, compassion and transparency. The time is now. I am ready to rise to the challenge of leadership. 🇵🇭 pic.twitter.com/suN1zFTxyW

The party has been split in two amid a rift between loyalists of Pacquiao, who was officially ousted from the party in July, and those loyal to President Rodrigo Duterte, a former long-time Pacquiao ally from his home region of Mindanao.

Pacquiao (62-8-2, 39 knockouts), an eight division world champion and future Hall of Famer, is coming off a unanimous decision defeat to Yordenis Ugas last month. Despite calls for his retirement, Pacquiao is rumored to be planning another fight in December or January.

Pacquiao placed fifth in the most recent presidential poll in July at 8 percent, behind the frontrunner Sara Duterte, the incumbent’s daughter and Mayor of Davao City, followed by Manila Mayor Isko Moreno, former Senator Ferdinand Marcos Jr. and Senator Grace Poe, who finished third in the 2016 Presidential race.

Pacquiao had been one of Duterte’s most loyal supporters in the Senate, denying that extrajudicial killings were occurring in Duterte’s Drug War. The United Nations’ Commission on Human Rights estimated that the death toll could be over 27,000. Pacquiao also supported Duterte’s push to bring back the death penalty. He has also been criticized for consistently being among the senators with the most absences, often due to being in training for his fights.

Still, Pacquiao took a swipe at the incumbent Duterte in his remarks, noting his inability to rid the government of corruption.

“To those who continue to serve in government to exploit and steal from the country’s coffers, you will find yourselves in jail soon,” said Pacquiao.

Among the Senate bills that Pacquiao helped introduce and were passed into law include the Free Internet Access Program in Public Places Act, and the Expanded Maternity Leave Act, which expanded paid leave for new mothers from 60 days to 120 days. Pacquiao was also the primary author of the bill that declared “National Bible Day” a working holiday on the last Monday of every January.

A run for president has long been expected as the next step up the political ladder for Pacquiao, who was first elected to the House of Representatives in 2010, serving two terms before winning a seat in the Philippine Senate in 2016..

Pacquiao is the second to declare for the 2022 presidential race, following Senator Panfilo “Ping” Lacson.