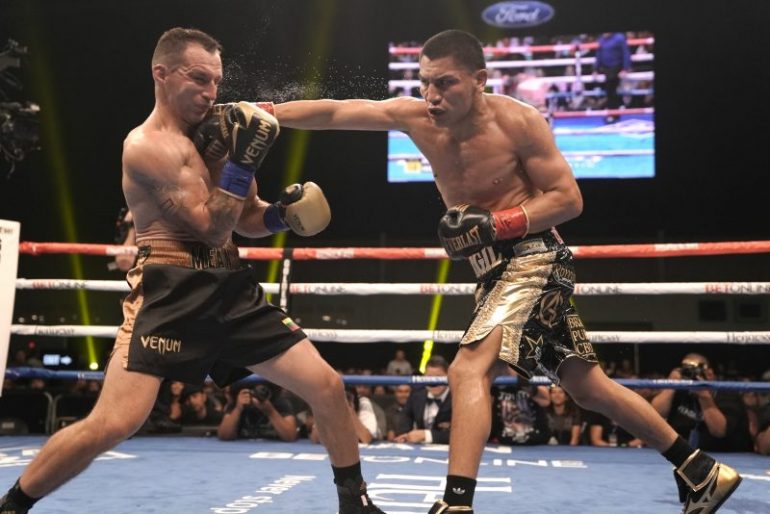 There were many Ring-rated fighters in action during the first two weeks of August, but very little movement in the divisional rankings because most of them were matched with unrated opposition. 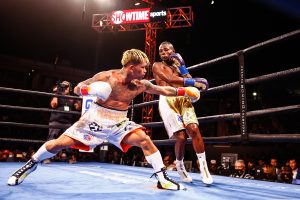 This photo is pretty much the story of the non-fight between Casimero and Rigondeaux. Photo by Stephanie Trapp / Showtime

The bantamweight division was the exception. The Ring’s Nos. 2- and 7-rated 118 pounders – WBO beltholder John Riel Casimero and former 122-pound champ Guillermo Rigondeaux – met in a Showtime-televised main event from the Dignity Health Sports Park in Carson, California on Aug. 14. Unfortunately, the styles and mentalities of the two banties cancelled each other out and the fans who had been accustomed to witnessing shootouts and slugfests at the “War Grounds,” a nickname earned during the outdoor venue’s years as the StubHub Center, had to suffer through a non-fight.

One boxer (Rigondeaux) wouldn’t fight, and the other couldn’t do a damn thing about it, but still won a split decision.

In the Showtime co-feature, a bout between The Ring’s Nos. 3- and 9-rated bantams, Emmanuel Rodriguez and Gary Antonio Russell, ended before it began when an accidental headbutt dropped and cut Rodriguez, leaving the former beltholder in no condition to continue, hence an official “No-Decision” call just 16 seconds after the opening bell.

However, on the same night, in Frisco, Texas, some actual ring action did play out with the welterweight crossroads clash between Vergil Ortiz Jr. and former title challenger Egidijus Kavaliauskas, which was the main event of a DAZN stream. Ortiz (18-0, 18 KOs), who entered the bout as the Ring’s No. 10-rated welterweight, overcame a wobbly moment in Round 2 and systematically broke down his fellow power puncher to an eighth-round stoppage (courtesy of three knockdowns). The “Mean Machine” also suffered a third-round knockdown to the 23-year-old Dallas native. 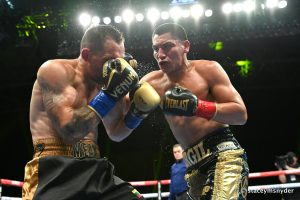 The Ring Ratings Panel was impressed with Ortiz’s performance and suggested advancing him two-to-four spots in the welterweight rankings.

Panelist Anson Wainwright suggested a move to No. 8.

Managing Editor Tom Gray was bolder in his suggestion, which had Ortiz jumping ahead of fellow young gun Jaron Ennis and veteran Danny Garcia.

“I can see Ortiz going up a bit higher, maybe to No. 6,” Gray said. “Ennis looks like an emerging superstar, but Ortiz trumps him on opposition now. Before anyone brings up the H2H, that’s not what this is about. For me, (Maurice) Hooker and Mean Machine are better wins than (Sergey) Lipinets and (Chris) Van Heerden.

As for Danny Garcia, he’s busy doing nothing right now.”

Adam Abramowitz suggested a move to No. 7, but fellow panelists Diego Morilla and Martin Mulcahey agreed with Gray’s opinion.

Heavyweight – Michael Hunter remains at No. 7 following a fourth-round stoppage of unrated and unheralded Mike Wilson.

“Still a work in progress but the perfect bridging fight to move him towards a world title fight,” said Wainwright. “I would keep him at No. 10. This win shows he deserved his recent ranking.”

Welterweight – Vergil Ortiz advances to No. 6. Eimantas Stanionis remains at No. 10 following a four-round No-Decision vs. veteran former titleholder Luis Collazo (due to an accidental clash of heads).

“(Ortiz) reminds me a bit of Fernando Vargas in that he has all the boxing tools except for maybe elite speed?” commented Mulcahey. “Since head-to-head is not a criteria, I agree Vergil’s resume is superior to Ennis, and he has done it a fashion where the results are just as impressive even if the manner was not as convincing all the time.”

Junior welterweight – Arnold Barboza remains at No. 5 following a 10-round unanimous decision over unrated Antonio Moran.

Junior lightweight – Roger Gutierrez remains at No. 9 following a 12-round unanimous decision over Rene Alvarado in their rubbermatch.

“I’m tempted to say Kid Galahad could advance past (No. 2) Emanuel Navarrete given the level of opposition of their respective losses,” said Mulcahey,” but Navarrete is on a great run against quality foes while Galahad is only doing one appearance a year.”

Bantamweight – John Riel Casimero remains at No. 2. Emmanuel Rodriguez remains at No. 3. Jason Moloney advances to No. 5 following a 10-round unanimous decision over unrated Joshua Greer Jr. Guillermo Rigondeaux remains at No. 7. Rau’shee Warren re-enters at No. 8 following second-round stoppage of unrated Damien Vazquez. Gary Antonio Russell remains at No. 9. (Mike Plania, previously rated at No. 8, drops out.)

“Mike Plania should drop out,” lobbied Wainwright, “he came in because of the win over then-rated Joshua Greer Jr., however, he has never fought at 118 pounds. He is a junior featherweight and so I would take him out.” [Editor’s Note: Plania has made the bantamweight limit, however, he hasn’t done so since 2018.]

Wainwright had suggested bringing Warren back in at No. 10, but was challenged by Abramowitz, who stated: “I would bring Warren in at No. 8. He is a former champion in the division and has accomplished a lot at 118 over the years.”

Mulcahey had this to say about Casimero-Rigondeaux: “I had Rigo winning (even though gave up scoring halfway through) against John Riel Casimero. I thought he imposed his style of fight and really made Casimero miss by country miles while countering in enough rounds to get the decision. I’m not at all upset about decision though. It’s hard to argue for a boxer employing that style to dethrone a champ even if the champ was ineffective much of the time.”

Junior bantamweight – Joshua Franco advances to No. 5 after scoring a 12-round unanimous decision over Andrew Moloney, who drops to No. 10.

“Andrew Moloney is such a hard luck case, so I am all for him staying in the top 10 by skin of his teeth,” said Mulcahey. “Besides who is the best we could bring in, maybe Charlie Edwards or Yanga Sigqibo?”

Junior flyweight – Felix Alvarado remains at No. 2 following a first-round stoppage of unrated late-substitute Israel Vazquez in a non-title bout.