Robert Guerrero serious about comeback, including fight with Victor Ortiz 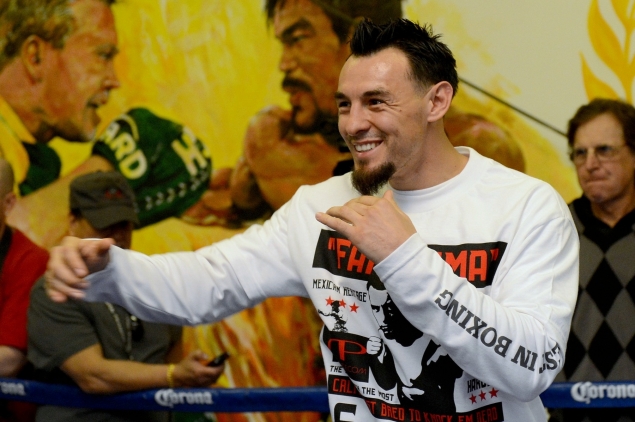 It was the early 2010s and Robert Guerrero and Victor Ortiz were young stars. They were prime time players in the boxing world.

Guerrero, a former featherweight and junior lightweight titleholder, had beaten top names at lightweight, such as Joel Casamayor and Michael Katsidis, before moving up to welterweight, where he defeated Andre Berto and landed the biggest fight of his career against Floyd Mayweather in 2013.

Ortiz had gone from everybody’s can’t-miss top prospect to bona fide contender with wins over Nate Campbell and Vivian Harris and a disputed draw with Lamont Peterson before winning the WBC welterweight title with a rousing victory over Berto in a 2011 fight of the year contender that paved the way for him to land the biggest fight of his career — a memorable fourth-round knockout loss to Mayweather that cost him the belt in 2011.

At any point during the early part of that decade a fight between Guerrero and Ortiz would have been a big deal, certainly a main event on a premium cable card or perhaps even on pay-per-view, but it did not happen as they both took other significant fights culminating with their losses to Mayweather for big money. 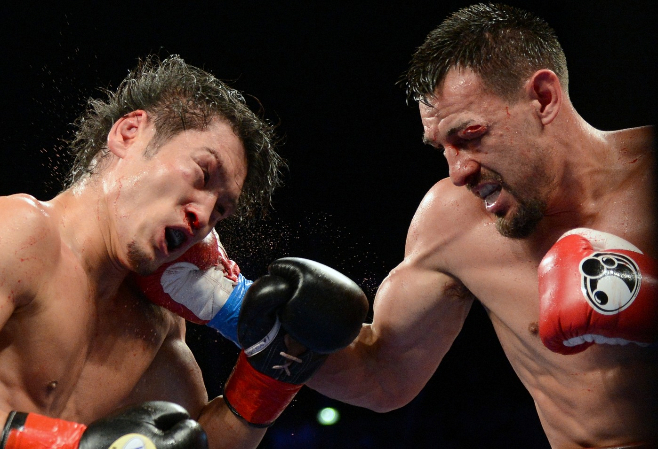 Robert Guerrero (right) vs. Yoshihiro Kamegai. Yes, the Ghost has been in plenty of rumbles. One more to come, Saturday. (Photo by Naoki Fukuda)

“Back then this was one of those main event pay-per-view fights,” Guerrero told The Ring. “Me and Victor were both hot at the same time and doing a lot in boxing. But as I say, better late then never, right?”

A decade after their heydays, but still with recognizable names to fight fans, the southpaws are set to come off long layoffs and meet in the 10-round welterweight co-feature of the Manny Pacquiao-Yordenis Ugas welterweight world title fight on Saturday (Fox Sports PPV, 9 p.m. ET) at T-Mobile Arena in Las Vegas.

Neither are top contenders any longer but they have both been in many fan friendly fights and Guerrero expects this one to be another of them.

“The one thing is you know Victor Ortiz comes to fight and I come to fight all the time, so it’s gonna be a great fight,” Guerrero said.

More significantly, Guerrero (36-6-1, 20 KOs), of Gilroy, California, hopes it can move him down the path to another world title opportunity.

He bounced back from his decision loss to Mayweather with a solid victory over Yoshihiro Kamegai, which landed him a shot at then-WBA welterweight titlist Keith Thurman in 2015 in the main event of the first Premier Boxing Champions card, a fight Guerrero lost by unanimous decision even though he had Thurman in trouble in the late rounds.

Guerrero next struggled to a split decision win over journeyman Aaron Martinez before losing three fights in a row – a decision to Danny Garcia for the vacant WBC title, a shocking split decision loss to journeyman David Peralta and finally an equally stunning third-round knockout loss to former lightweight titlist Omar Figueroa Jr., who dropped him five times, in July 2017.

Seventeen months later, however, he returned to stop low-level opponent Adam Mate in the second round on the undercard of Deontay Wilder-Tyson Fury I in December 2018. Two more low-profile wins would follow in 2019 before Guerrero’s comeback was halted due to the coronavirus pandemic.

Now, Guerrero said he is ready to continue with the comeback, full steam ahead. 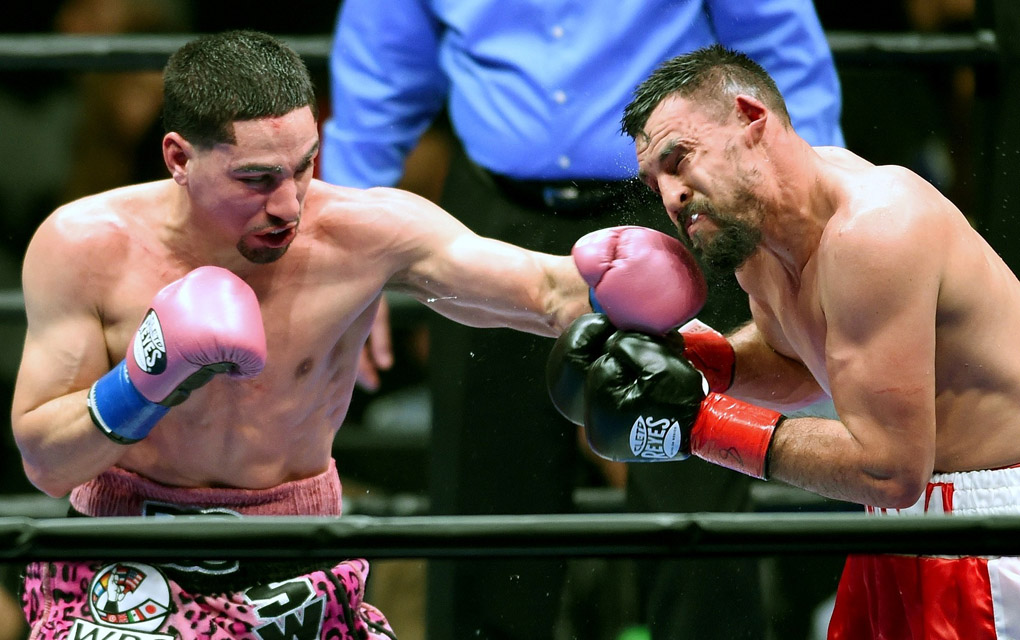 Guerrero told the writer that he had lost focus, and so his performances slipped. Now, he insists, he’s dialed in right.

He said he had could have fought during the pandemic once the sport was back up and running last summer, but he elected to extend his layoff for the sake of his wife, Casey, whose years-long fight with leukemia has been well-chronicled.

“Just being safe,” Guerrero said. “Everyone knows my wife has a real low immune system from cancer, so just wanted to be safe and not running around to different places. She’s doing great but you still take those steps of precaution with what she’s been through, because her immune system isn’t as strong as a normal person. So I even stepped away from the (PBC television) commentating because of having to travel. That’s the reason for the layoff.”

But Guerrero said he has trained throughout the layoff with trainer and father Ruben Guerrero.

“I have my own home gym so I stayed in the gym training with my father, working on things and really honing my craft and staying in shape,” Guerrero said.

He said he also has made it a point to get back to the style that made him so successful earlier in his career.

“My career at the lighter weights I was a boxer-puncher, stayed behind the jab, working, slipping (punches), on my toes,” he said. “The higher (in weight) I got I just wanted to slug and slug and slug and try to walk the big guys down, but that only gets you so far at that world class level, especially when you’re a little guy coming up. 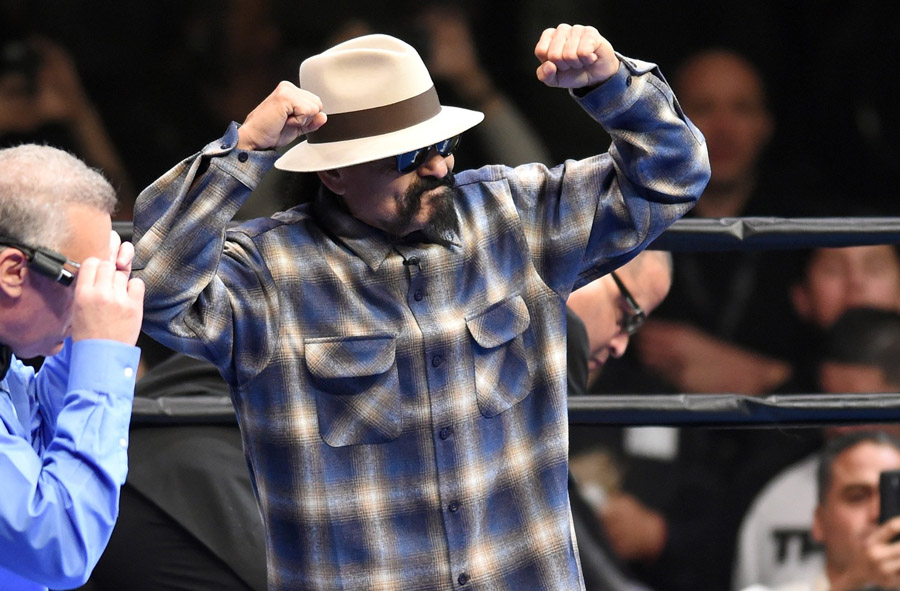 Robert says he’s been working on reverting back to old form with OG trainer/father Ruben.

“I was able to really go back (during the layoff) and assess myself, start working on my toes and boxing.”

Having turned pro 20 years ago, and now at age 38, Guerrero is no young man in the sport, but he certainly sounds like he has the right attitude and work ethic to at least get the most possible out of what he has left.

“I feel great, my body feels great. This Covid, for a guy my age, I really feel like it really benefited me because I was able to just stay in the gym, stay sharp,” he said. “I love doing this and I really feel I got a lot more left in the tank to make that run for the world championship again.

“That’s the goal, to put myself back in that title contention and get a world championship fight, but first things first. You got to come take care of business against Victor and put on a spectacular show. But my goal is to get that word championship title shot again and I think it’s possible. You never know – it could be the next fight.”

Guerrero chalked up the three-fight losing streak that led to his brief retirement to having lost focus. He said while he was fine physically, he just was out of it mentally.

“I spiraled out of control. I wasn’t working on my craft,” he said. “Not working behind my jab, not focusing on what I got to do to make myself better. I trained hard but I didn’t have that mental focus. If you’re not 100 percent focused on what you’re doing you’re not going to listen to the corner when they’re telling you what to do.”

When he decided to return to the ring at the end of 2018, he got with his longtime team of his father, manager Luis DeCubas Jr. and strength and conditioning coach Bob Santos to have them weigh in.

“When I told them I wanted to start fighting again, they said, ‘You have to start working on this, work on that, we’re gonna assess you and make sure everything is good. We don’t want to just be like, OK, you’re back and throw you in,’” Guerrero said. “We took some evaluation time and prepared. It was a big decision to get back in the ring. I told them, ‘Hey, you know what? If you don’t think it’s there, it’s fine. Pull the plug.’ But so far, so good. I’ve been in Las Vegas training for a month and half, been secluded and focused and ready to go.” 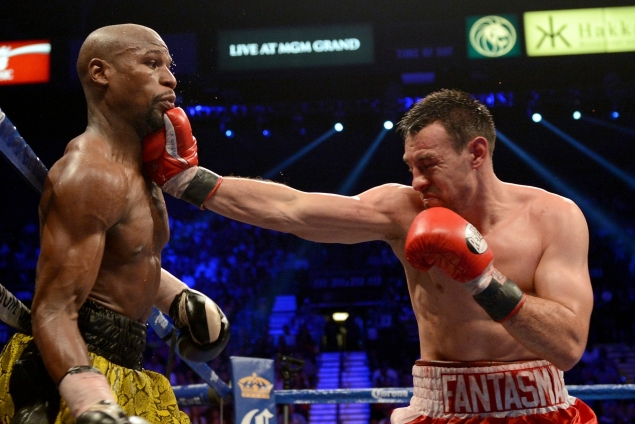 Guerrero has been a valiant warrior willing to meet the stiffest of foes.

He said he decided to go to a second home he owns in Las Vegas, one with a full boxing gym, to get out of the comfort of training at home, even though his 14-year-old son, Robert Guerrero Jr., has been with him training as an aspiring 115-pound amateur with five bouts under his belt.

His fight with Ortiz (32-6-3, 25 KOs), 34, of Ventura, California, who has not boxed since a charitable draw with former two-division titlist Devon Alexander in February 2018, got pushed up the card to the co-feature position. The elevation came when welterweight titlist Yordenis Ugas, who was in the original co-feature in a defense against Fabian Maidana, wound up in the main event against Pacquiao when his original opponent, unified titleholder Errol Spence Jr., was ruled out of the bout because of a torn retina in his left eye.

“I’m excited about this, especially getting moved up to the semi-main event on pay-per-view, especially to Manny, who is a legend of the sport,” Guerrero said. “It’s exciting to be there. I’m happy about it. I’m very focused.

“I’ve been here in training camp doing what I have to do to be ready for this. I did everything that I had to do to be 100 percent ready for a world championship fight.”